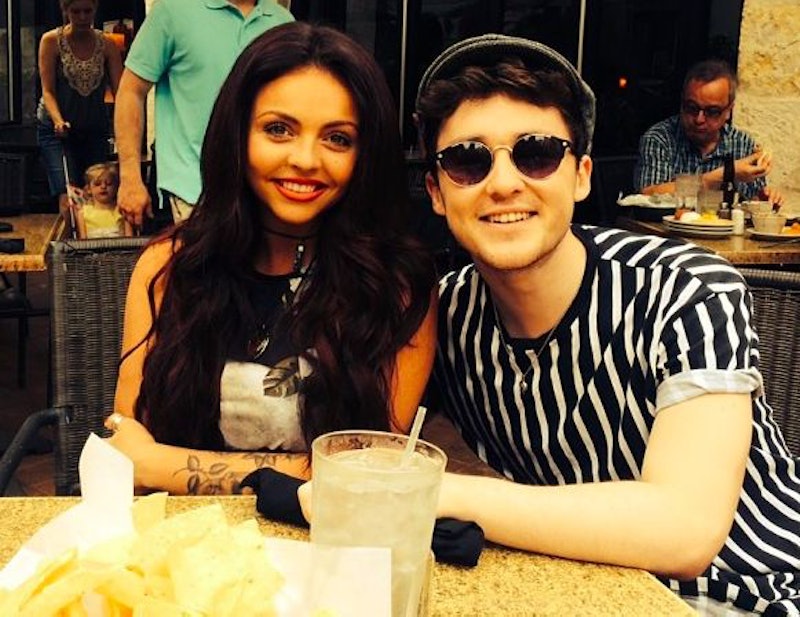 Disclaimer: I've been a hardcore #Jakesy shipper ever since the Rixton frontman and Little Mix singer first started dating and were inevitably adorable on social media together. So when Jake Roche proposed to Jesy Nelson while Ed Sheeran was performing "Tenerife Sea" (literally my future wedding song; it's OK, you can steal it guys) the word "chill" was no longer a part of my vocabulary. Of course, Little Mix and Rixton stans have been following the couple's every move all around the Internet ever since they got together, but news of their engagement may have some fans wondering: How did Jake Roche and Jesy Nelson meet?

As I was busy all-caps texting pretty much anyone I could think of who would care as deeply about the couple's engagement (and my #ProposalGoals), Jake Roche was tweeting even more adorable things about the best proposal in human history — like how Ed Sheeran traveled a solid five hours "to sing our favourite song on his day off" and how Roche will "never ever be able to repay" him for it. And, for the insatiably curious, his Instagram pic of the proposal even provides some insight into how the two met. Heart-eye emojis for days.

Well, as Jake Roche told Pop Crush last year, he and Jesy Nelson met through friends at a "big show" that their groups performed in together. "We just met through mutual friends," the Rixton singer said of the couple's meet-cute. "We did a big show in London together and we just met backstage. And we've stayed close ever since." That show, presumably at the Manchester Arena (yes, London and Manchester are different cities but the kid is clearly blinded by love), is the exact same spot where — a year to the day after meeting — he got down on one knee and asked Jesy Nelson to marry him. (CRYING FOREVER.)

"A year ago today I met her at Manchester Arena, so it was only right, with a little help from my friend, that this happened," Roche captioned the snap of himself proposing, easily the sweetest photo in all of existence. "Best day of my life."

It goes without saying that Jake Roche is a seriously sentimental guy — just look at any of the beyond sweet captions of him and "his lady" on Insta — but the fact that he upped the romance factor by popping the question where the two first met... well, I'll just be over here submitting this gem of a proposal to the @howheasked Instagram like it's no big deal. Of course, the fact that he had his good pal Ed Sheeran serenade the two with my freaking dream song only further cements his romantic side.