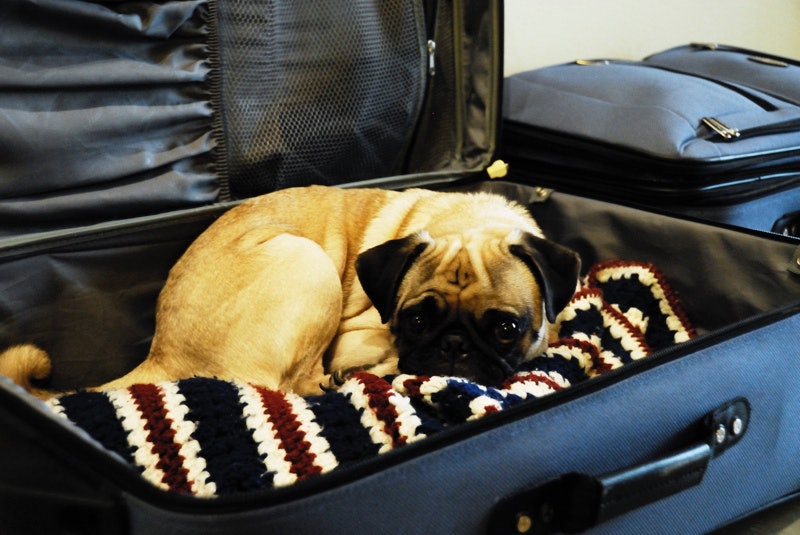 If you've ever traveled with a pet, you may have noticed that your furry friends' accommodations at the airport may not be exactly what you'd consider "first class." Well, that's all about to change thanks to John F. Kennedy airport's new luxury animal terminal ARK, which is currently in the works. It's a sad day when dogs and cats are fancier than me (and being treated better at the airport), and I'm not sure if that says more about me personally or about these pet owners. Either way, though, now I have #goals, so... at least there's that.

The new terminal, called ARK (you got it, named after Noah's ark), will be the world's first air terminal for animals, accommodating the 70,000-plus animals that fly into and out of JFK every year. And it's not just dogs and cats, by the way — ARK will also be home to horses, cows, and even penguins. Good to know I can bring my penguin with me on a plane; I'll definitely keep that in mind for the next time I travel.

According to the Associated Press, the $48 million terminal will feature climate-controlled stalls and showers for horses and cows, hotel suites with flatscreen TVs for dogs, and even a room for the penguins to mate in private. Does that mean that penguins can join the mile-high club now?

Not that jealous yet? Check this: the ARK will have a $20,000 luxury resort just for pooches, complete with bone-shaped splashing pools, massage therapy, and "pawdicures" with nail polish for the beauty queen dogs out there. Oh, and while the dogs sit back and relax watching whatever dogs watch on flatscreen TVs, their owners can check in on them via webcam. The dog is getting a pedicure in the airport, and here I am just trying to find a clean bathroom with toilet paper at LaGuardia.

You might be thinking that this idea is all sorts of ridiculous, but many experts do support it. For horses especially, the ARK is being hailed as a huge leap forward (pun intended). For one, it makes transporting horses less stressful because planes can directly taxi to the ARK, rather than the horses having to be taken to the plane. Furthermore, it is standard to quarantine traveling horses for a three-day period to make sure they aren't carrying any diseases, and it will be much less taxing on the animals to be able to quarantine them on-site. For all the animals, including horses, they will have round-the-clock access to a clinic run by Cornell's veterinary school, which is also pretty great.

It seems like, overall, the ARK is not really intended for low-budget travelers with pets (a one-night stay at the dog resort could cost $100 or more), but is going to make travel a lot more hassle-free for bigger animals that are more expensive to transport by plane. I could maybe get behind this idea, but only if they would allow me into the terminal to play with all the animals.

If not, I'm still going to be salty about it until the end of time. Is having more than one working outlet at the gate so much to ask for?

Check out some concept images of ARK here. Just, you know... be prepared to have a lot of feelings about them.