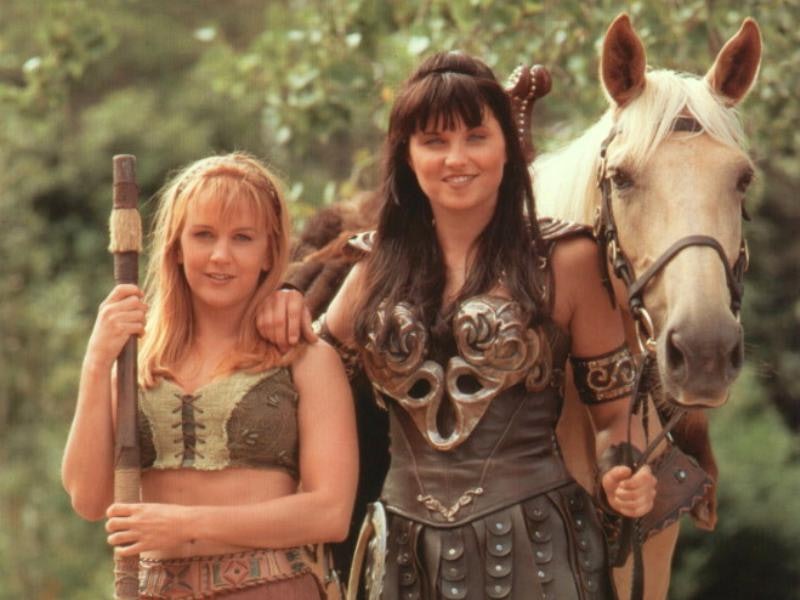 Though we all know that the fourth 'R' is Rihanna, it seems like in Hollywood, it's definitely 'reboot.' And here comes another — according to the Hollywood Reporter on Monday, NBC and NBC Universal are looking for writers to come on board a Xena: Warrior Princess reboot they have in the works. The project is in very early development, but producers Rob Tapert and Sam Raimi from the original series are involved with the project. And Twitter is... conflicted. Sure, there's a ton of excitement for a revival that's been long-awaited, especially by Lawless herself, but with a condition: that Lucy Lawless be cast in the role of Xena, because she is THE Warrior Princess. But that doesn't seem likely, and some fans are not happy about that.

Some actors just ARE their characters, and fans will stand up loyally for their legacies. And that's exactly the case here — though very excited about the prospect of more of the action-adventure series, people are furious that it seems unlikely that Lawless herself will play Xena, since the series is being developed as a reboot and not a continuation of the epic story. Even though Lawless herself must be thrilled today, because she has been gunning for a Xena reboot for a long time, the details of the project so far indicate that she'll have more a cameo role than reprising her badass Xena, saying she will be behind the scenes.

Lawless recently told HitFlix at ComicCon that she has been pushing and pitching for a Xena revival, which was held up, apparently, because it was unclear who had the rights to the series: "Don't waste this opportunity. Reinvigorate that franchise...They're fools not to bring it back." It looks like when Lawless speaks, people listen (and it helps that producer Rob Tapert is her husband IRL).

Xena and her sidekick Gabrielle, played by Renee O'Conner, became a global sensation when the series aired in 1995. The two Amazon women were on a moral mission to redeem Xena's good name and atone for her formal evil warlord ways. Though she often feels vulnerable, Gabrielle, her equally badass companion, keeps Xena on track to resist and constantly pursue the "greater good." And there are tons of heavy weapons, battle scenes, and lots of leather. No wonder fans have been hoping for a Xena revival for two decades. But now that they are getting it, they want more, demanding that only Lawless play the strong lead.

Is it early enough for fans to change the producers' minds? Right now, "sources say the new Xena would have to have the charisma and charm of Lawless and the smarts of The Hunger Games' Katniss as producers are said to be looking for a sophisticated and smart superhero for a new generation." But fans don't seem to want a new Xena at all, and they are saying it with vigor: BRING BACK LUCY AND RENEE. And Lawless has been feeling the same thing, saying that she wanted to play the Warrior Princess again. When asked about the fact that that seems impossible, since Xena died in the original series, after all, Lawless brushed it off flawlessly, telling Den Of Geek:

So what? Technicality! No one really dies! Screw her head back on, it’s a bit wonky, and she’s got a really bad attitude since she’s been in a box for 20 years, so they’ve got to get Xena’s mojo back, and go and save the world somehow.