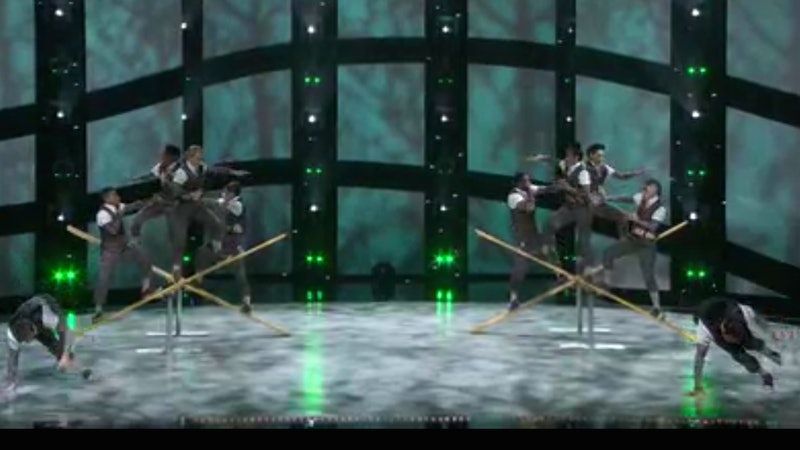 After watching ten years and twelve seasons of Fox's So You Think You Can Dance, it's inevitable that I, and many fans, would have favorite choreographers. Monday night's Season 12 episode made it very obvious why Christopher Scott is a part of that list. This guy is kind of incredible. Scott is an accomplished dancer himself, having appeared on The Legion of Extraordinary Dancers and a few of the Step Up films. He even got an Emmy nomination for two of his routines on SYTYCD Season 8. On Monday night Christopher Scott, with the help of SYTYCD alum Phillip Chbeeb, took a rather difficult premise and turned it into a great routine. He used see-saws for a Team Street performance and proved that while using props doesn't always work on the SYTYCD stage, it can make for an unforgettable routine.

And it's not the first time Scott has used foreign objects on the SYTYCD stage to make for something truly amazing. Season 8's Top 10 guys routine that Christopher Scott choreographed had the men dancing with sand. That's right, sand. How on Earth did they do it? Very carefully and possibly with a little bit of magic. Then there's Christopher Scott's Season 8 "Misty Blue" routine which included a breakfast table and dishes, and that routine was one of the best of the whole season.

Scott has proven he is an expert at using props in his dances, but how have others fared in the show? Mia Michaels is another choreographer who has really used props to her advantage, with the Park Bench routine in Season 2 and the bed routine and the door routine, both with tWitch, in Season 4. Then there's Mandy Moore's conference table Jazz routine in Season 3 that is really quite memorable. But props can be extremely difficult to work with, which proves how talented the dancers and the choreographers have to be to really pull the routine and the performance together.