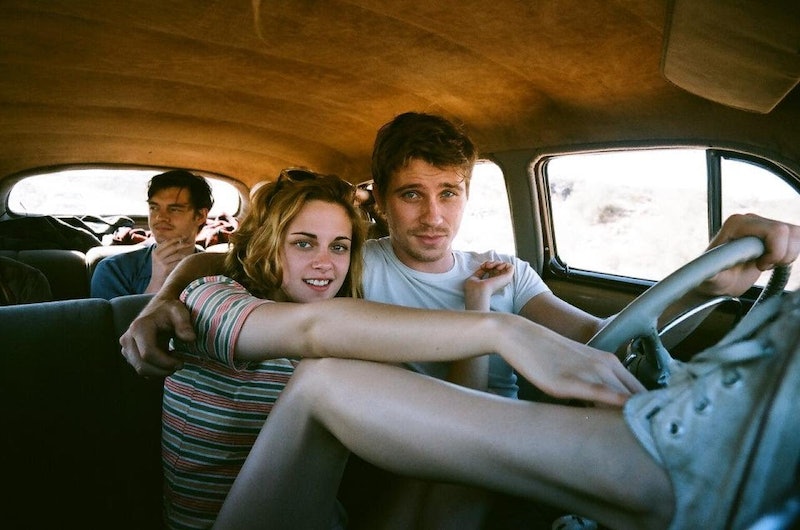 If you'll excuse me, I now have plans for the next 14 hours thanks to Atlas Obscura's Guide to Literary Road Trips — an "obsessively detailed," annotated Google Map of the most epic U.S.-based road trips in American literature. Spanning 12 memoirs and novels published from 1872 until 2012, this ridiculously amazing map allows all of us to search every single place-name reference in the books, not only with quotes from the books themselves, but via Google street view so we can see it through the traveling author's eyes. The coolest part? When certain places overlap and you can see the difference in how authors spanning decades or centuries view the same landscape. I'm going to now apologize to everyone's boss or teacher for bringing this delightful time-suck to your attention.

Writer Richard Kreitner created this literary road trip map for Atlas Obscura — a collaborative, Web-based guide to the "world's wondrous and curious places" — because he calls himself a "freak for the American road trip." He sorted through American literature to find 12 books were the road trip wasn't just an addition to the story but it created thematic narrative arc. It couldn't be too short, such in Fear and Loathing in Las Vegas ; to scattered, as in Lolita ; or too removed from the major themes, as in The Grapes of Wrath . In chronological order of publishing date, the following 12 books are available on the map:

Things get particularly busy on the Northeast Coast and out near Carson City and Reno, on the border of Nevada and California.

Here's how the Reno, Nevada area is described by Strayed in Wild in 2012:

By the time the bus pulled into the station in Reno at 4 a.m., I hadn't slept a minute. Greg and I had an hour to kill before the next bus would depart for Truckee, so we wandered blearily through the small casino that adjoined the bus station, our packs strapped to our backs.

It was a hot, sunny afternoon. Reno, Battle Mountain, Elko, all the towns along the Nevada road shot by one after another, and at dusk we were in the Salt Lake flats with the lights of Salt Lake City infinitesimally glimmering almost a hundred miles across the mirage of the flats, twice showing, above and below the curve of the earth, one clear, one dim.

I drank my beer and took my case down the road, through the irrigated plain at Fallon, into hills, along the Truckee River, under a shelf of glowing clouds above downtown Reno, past signs offering CANDLE LIGHT WEDDINGS—NO WAITING—FREE WITNESSES. I stopped near the University of Nevada...

There was a race course near New York, I remember, or perhaps it was an aerodrome, and there were many tall bridges leading somewhere, and then there was the city. Streets, crowds in the streets, a light wind blowing, the sunshine between tall buildings, faces splashing and eddying and swirling like the white tips of countless waves, and, over all, a great, warm murmur.

Times Square is incredible. You've never seen such lights, such hustle. Whole sides of buildings are given over to advertisements that blink and ripple and wave. It's like a storm on an electronic sea.

They reached New York in the middle of July, and they were like horses in the home stretch. Everybody felt good. They tooled across 42nd Street and up Central Park West with the speakers blaring and even New York had to stop and stare...And NewYork—what a dirge New York was. The town was full of solemn, spent, irritable people shit-kicking their way down the sidewalks. A shit kicker is a guy with a frown on and his eyes on the ground, sloughing forward with his shoes scuffing the pavement like he's kicking horseshit out of the way saying oh that this should happen to me. The shit kickers gave them many resentful looks, which was the Pranksters' gift to the shit kickers. They could look up at the bus and say those are the bastids who are causing it, all the shit.

Isn't it incredible to think of these distinct and accomplished authors, each with their own voice, occupying the same tiny parcel of land across decades? I know, I could do this forever. All the applause to Atlas Obscura — and all the apologies to anyone who tries to talk to me today.