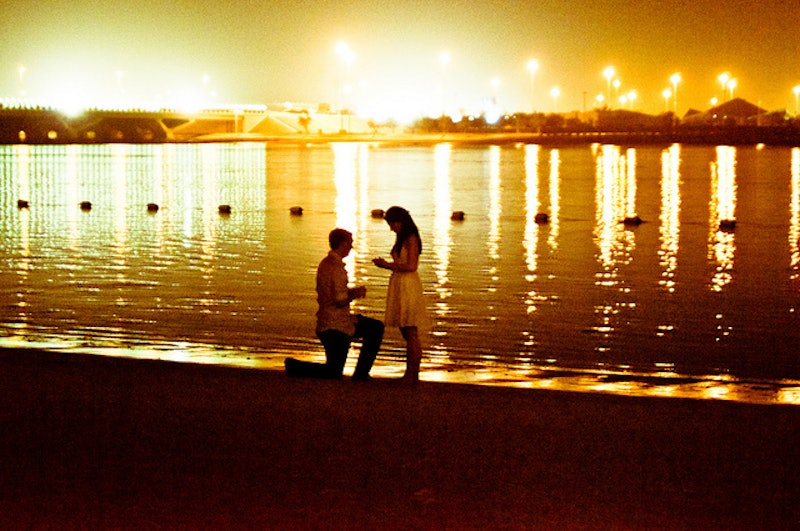 As all of our peers start to get engaged, the question of how to propose marriage seems to be even more relevant to our lives. But unfortunately it seems that the cliché story for the straight couple of the man getting down on one knee and asking for his beloved's hand in marriage isn't going away anytime soon, according to Cristen Conger of Stuff Mom Never Told You. Conger recently received a tweet asking if she could do a video discussing gender roles in marriage proposals, since it's still not common to see women propose to men these days — and I'm excited to say that she decided to share her knowledge on the matter with the Internet. Here's why more women don't propose — and why they should start.

In the video, Conger points out that despite all of the progress made with regards to women's rights and gender equality in recent years, there are "entrenched, gender-based traditions" that have managed to go unchanged. Arguably, marriage proposal is one of the most status-quo of these traditions that remains unchallenged. But why is this the case? Well... largely because women don't want to propose and men don't want them to, either. Conger cites a study conducted by UC Santa Cruz in which researchers polled college students to see their comfort levels with men and women proposing — and guess what they found? That zero percent of men were comfortable with the idea of a woman proposing to them. Seriously! Zero percent! And not only that, but zero percent of the women polled said they were comfortable with or intended to pop the question themselves.

The depth to which these gender roles are entrenched in how we feel about marriage proposals becomes even more apparent when we consider the reasons the women gave for not wanting to propose in the first place: They said that they wanted to stick to tradition, that they wanted to avoid emasculating their male partner, and even that proposing themselves would take away from the romance of the moment.

What Conger found the most intriguing about this idea, though, is that the assumptions from which these reasons stem are based in the idea of only men being trusted to decide the level of commitment in a relationship. "If a woman asks a man, then she is rushing him," Conger says of this implication. The problem here is that everyone loses when we fall prey to thes outdated ideas, since men are continually stereotyped as sex-crazed animals who rarely want to make a commitment to the women they're dating and women are always assumed to want relationships to end in marriage. We end up forcing people into predefined gender roles in their relationships, instead of letting them — gasp! — make their own decisions about their lives.

The proposal tradition stems from the historical roots of marriage and often doesn't really serve us in our modern world, so I'd say it's high time women started proposing as often as men do. If you want to learn more about this aspect of gender-based proposing, watch the full video below: