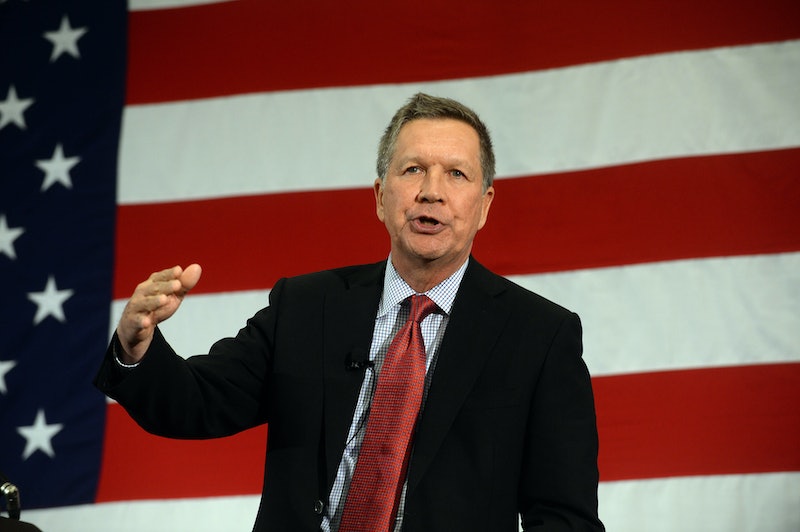 Don't look now, but the Republican presidential field has a new challenger — Ohio Governor John Kasich. Kasich, who announced Tuesday, brings the total number of Republican presidential candidates to a staggering 16, although that apparently hasn't dissuaded anybody. And, much like Donald Trump in any presidential campaign whatsoever, not everyone quite belongs — nor does everything they say. For example, here are five John Kasich quotes that included religion where it just didn't belong.

Simply put, Kasich is not a man who's shy about his faith. He grew up as a Catholic, and despite a period of drifting away from spiritual pursuits, he's now a member of a conservative Christian sect that split from the Episcopal Church in 2004, after it elected an openly gay bishop. That's quite an intersection of faith and politics, to say the least

And, as you might expect from someone who says their call to higher office is based on their faith, Kasich has sometimes blended his political views with his religious ones. And that can be a problem — whatever happened to the separation of church and state, huh? Here are five times that Kasich invoked his faith on a matter of public policy, when his personal religious views would've been best left out.

Kasich, to his credit, has come around a little bit on this recently. Although after the Supreme Court made marriage equality legal in all 50 states, there's not much else GOP leaders can do. When asked about his reaction to the court's ruling in June, as detailed by Cleveland.com, Kasich described himself as "very disappointed":

I do believe in the traditional sense of marriage — that marriage is between a man and a woman. We'll honor what the Supreme Court does — it's the law of the land. It's the way that America functions.

Deferring to "traditional" standards of marriage is essentially an explicitly religious argument, seeing as the specific opposition runs parallel to anti-gay provisions laid out in scripture. To the contrary, the real tradition of legal marriage in America is a fluid one, as evidenced by U.S. history — until 1967's Loving v. Virginia, after all, interracial couples couldn't wed either.

Invocations of faith aren't always bound to upset left-wingers, at least on policy grounds — for example, Kasich referenced his Christian faith to defend his support for the Affordable Care Act's Medicaid expansion, framing it as part of his spiritual duty to do right by the poor.

But just because you might agree with the takeaway doesn't make the religious angle any more appropriate — it's still trying to leverage one's personal faith into pubic policy, and that's a rightly controversial concept. While clashing with members of his own party over Medicaid, here's how Kasich described his conversation with an Ohio legislator, as detailed by The Columbus Dispatch.

I had a conversation with one of the members of the legislature the other day. I said, "I respect the fact that you believe in small government. I do, too. I also know that you're a person of faith. Now, when you die and get to the meeting with St. Peter, he's probably not going to ask you much about what you did about keeping government small. But he is going to ask you what you did for the poor. You better have a good answer.’"

Arguing that Jesus would've wanted expanded health care might be one thing, but holding the prospect of heavenly judgement over somebody's head is quite another.

This is maybe the best example of Kasich bringing his faith into politics in a big way, and making sure everybody knew it. Back in late 2014, his student mentorship proposal came under some glaring scrutiny, thanks to a spiritual stipulation: to get the mentorship money, schools had to partner with a business and a church, or a non-profit and a faith-based organization.

According to Cleveland.com, this interpretation went beyond the language of the legislation that approved the program, and in a video message to mentorship applicants, Kasich made it clear that he viewed this as a spiritually righteous cause.

The Good Lord has a purpose for each and every one of them [students] and you're helping them to find it.

Way to make any atheist students who need mentorship feel welcome, huh? Thankfully, this provision was ultimately clarified and partially rectified in early 2015 — as it stands now, the ostensibly "faith-based" organizations can be secular, too. But that doesn't mean Kasich can escape the quote above, or his broader propensity for packaging faith with public policy.

After signing a 20-week abortion ban into law in Ohio back in 2011, Kasich released a statement lauding it, citing his belief in the divine origins of human life.

Life is a gift from God and one way that we express our ongoing gratitude for it is by respecting it. This bill does that in a very fundamental way and I'm proud to have signed it into law.

Opposing a woman's right to choose isn't solely a religious perspective. There are plenty of secular people who support these kinds of bans, or ones centered on fetal viability, so Kasich could've made this point without shouting out his personal religious beliefs.

5. Deciding Whether To Run For President

There are all sorts of reason someone might run for president. When explaining how he'd make up his mind on NBC's Meet The Press, Kasich did mention the considerations of his family, but placed that behind God's plan in overall importance.

Well, my family is a consideration. And number two, the most important thing, what does the Lord want me to do with my life? He puts us on Earth, all of us on Earth, to achieve certain purposes. And I'm trying to determine if this is what the Lord wants.

This may not be a situation where Kasich's religion impeded on public policy — his feelings about running are his own — but if you're jumping into the race, why alienate secular voters off the bat? Suffice to say, there are probably some secular voters who'd appreciate a Republican of Kasich's relative moderation, but may get rightly concerned when they start hearing this "God tells me" kind of stuff.