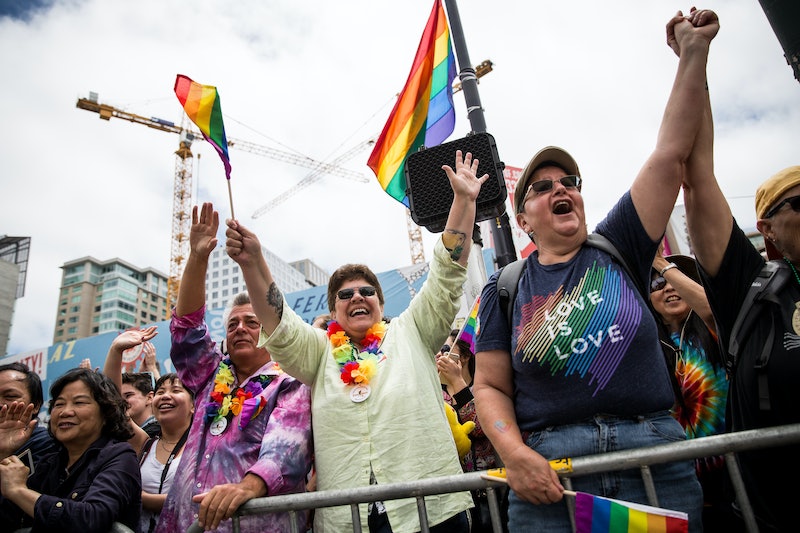 Even as your friends are slowly taking the rainbow filters off their Facebook photos, today brings some more exciting news about the Supreme Court's landmark same-sex marriage decision in Obergefell v. Hodges: lead plaintiff Jim Obergefell is writing a book, which will be titled 21 Years to Midnight: The Promise That Brought Marriage Equality, with Washington Post reporter Debbie Cenziper. It will be be published by William Morrow next June, to celebrate the one year anniversary of marriage equality. (We'll probably still be partying then, in case you're wondering.)

Details about the book are still scarce, but the title already sounds like a fascinating mix of the personal and the political. According to the publisher, the book won't just tell the story of Obergefell and his late husband John Arthur, it will also include perspectives from other plaintiffs in the case and the fight for marriage equality more generally. “Sometimes histories written by the participants can be the most gripping, immediate and moving — and that’s exactly what we have in this book," said William Morrow executive editor David Highfill. "It’s rare to have a story with such wide cultural and political resonance that can make us cry and cheer at the same time.”

In a statement about the book, Obergefell said that it will tell the story of the "unexpected journey" to the SCOTUS decision "from the perspective of [Obergefell and Arthur's] 21-year relationship and the overall marriage equality movement." Given his remarkable eloquence on this topic — which you can see for yourself in the video below — I'm confident Obergefell can balance the emotional and historical aspects of the story.

One of the most exciting aspects of this project is the involvement of Cenziper, who has both a deep personal connection to the story — she's known Obergefell for 20 years — and stellar reporting skills, which snagged her a Pulitzer in 2006 for her investigation into housing corruption at The Miami Herald.

Obergefell and Cenziper's book will beat the previously announced film version to debut by at least a year, giving us all plenty of time to speculate about casting.