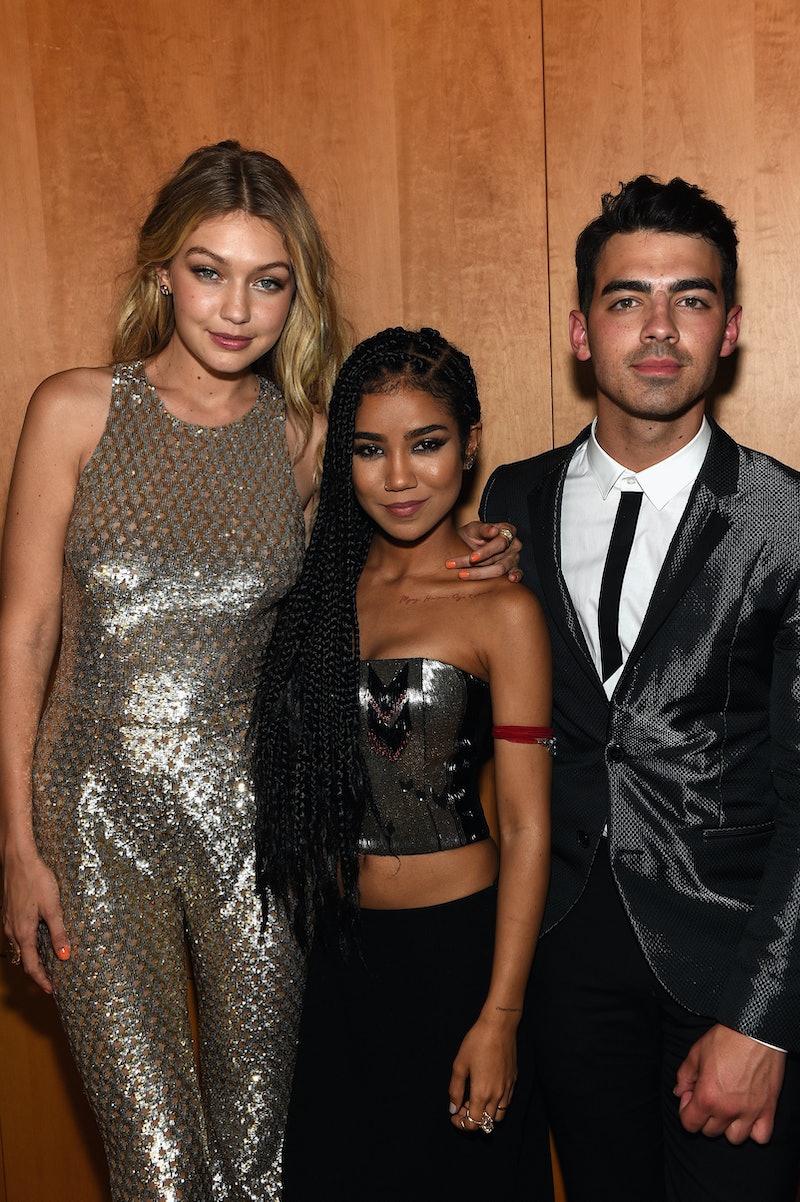 Seeing as how model-turned-actress Cara Delevingne formally introduced Gigi Hadid and Joe Jonas to the world as G.I. Joe on Instagram Monday night, I guess we've all been granted the OK to officially consider them a couple. Sorry, Cody. Even though the pair is totally an exception to an age-old girl code rule (remember that time Jonas dated Hadid's BFF T-Swift circa 2008?), the two are pretty high on the list of Hollywood's "It" couples, and I am all in favor of their couple swag.

For the record, I totally called this. When rumors first circulated that Hadid and Jonas could potentially be a thing, I was a bit skeptical given the Jonas Brother's history. However, I recently watched the "Just In Love" video and you cannot tell me his Parisian booty call does not resemble Hadid. This was meant to be, guys.

I'm also convinced that Hollywood pretty boys mix well with runway models. Once he grew out of his "Year 3000" cameo tee and baggy jeans phase, puberty did Jonas a whole lot of good. I've always thought he resembled a younger Enrique Iglesias. Hadid came out of nowhere with her long blonde hair, green eyes, and killer bod and boom! We had our 2015 model of the year. G.I. Joe was stylin' from the get-go.

So while we're all gushing over Taylor Swift and Calvin Harris's epic love story, there is definitely an argument to be made that the pairing off of Hadid and Jonas has resulted in one of Hollywood's most stylish couples to date.

Here are five times these two have given us a taste of all the wonderful #relationshipgoals to come —because the couple that dresses together, stays together.

Ah the adorable yet gross outfit matching has begun. At least we're starting small with a pair of Adidas. I applaud the couple on their sneaker of choice.

What's black and white and jet lagged all over? A very color coordinated G.I. Joe.

Between Hadid's crop top paired with thigh length vest and a pair of stunner shades and Jonas's layered look, these two would totally find themselves at the top of the high school food chain.

Celebrating New York Fashion Week: Men's Hadid and Jonas made a cameo at the Wine 'n Dine soiree, him clad in all white while she was his obvious counterpart in head-to-toe black. Style opposites attract, right?

More like this
Rita Ora’s Sheer Dress & Mermaid-Inspired Prosthetics Stun At British Fashion Awards
By Sophie McEvoy
13 Nail Art Ideas Inspired By Every Song On Taylor Swift's 'Midnights'
By Olivia Rose Ferreiro
All The Most Stylish Winter Wardrobe Staples You Can Buy On Walmart.com
By Jessie Quinn
The 8 Coolest Haircut Trends Of 2023
By Audrey Noble
Get Even More From Bustle — Sign Up For The Newsletter