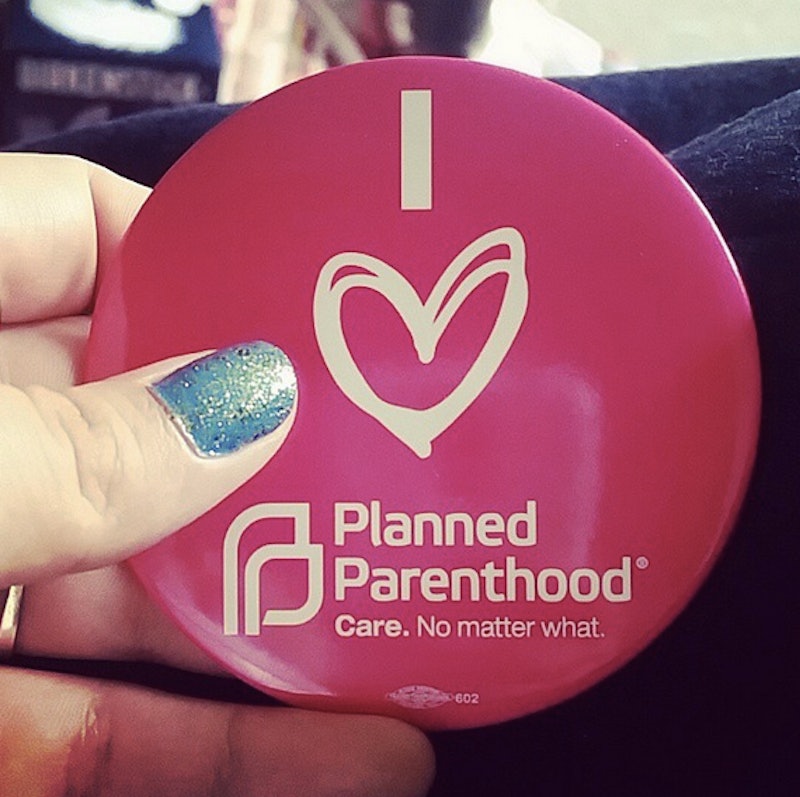 We've seen not one but two shady undercover videos attacking Planned Parenthood in the last week, part of a systematic attempt at advancing a religious and political agenda that harms reproductive rights and autonomy. In each heavily-edited film, we see alleged negotiations over buying fetal tissue for research, an activity which is categorically illegal. Human organs and tissue cannot be bought or traded in the U.S. However, Planned Parenthood does not in fact do this, and it's disingenuous and dangerous to imply otherwise. Instead, some clinics empower patients who are interested in seeing their abortions go to a good cause — and you can be one of those patients, if you're so inclined.

The Center for Medical Progress (CMP), the group behind the videos, is going to cost us millions in efforts to debunk its claim and educate the public about fetal tissue donation, an activity that's perfectly legal. CMP, along with other right-wing groups and lawmakers, is already pushing for congressional investigations and other costly moves that would waste government resources while targeting abortion providers for harassment and limiting their ability to work. This is not the first time sketchy and potentially illegal videos have been used to smear Planned Parenthood, nor will it be the last.

Planned Parenthood was unavailable for comment at press time, but the organization has issued a public statement noting the spurious origins of CMP and debunking the claims made in the video as "heavily edited in an attempt to support false and outrageous claims." Planned Parenthood attorney Roger K. Evans warns that future sting videos may be in the works, as groups like CMP likely have hours of footage to creatively edit and manipulate. Notably, some may actually violate patient and provider confidentiality by filming areas where donated tissue is stored.

In a way, though, they also did us a favor. Many patients weren't even aware that they could donate fetal tissue for research before these videos helpfully informed them about it. Donating fetal tissue contributes to invaluable scientific research that cannot be performed with other organ and tissue donations, but the stigma surrounding abortion has made it verboten topic — at the cost of medical advancements. In the midst of efforts to push back on these deceitful videos, we're missing an opportunity to talk about how, and why, to donate fetal tissue to research. For those considering abortion or those who might need the procedure in the future, thinking ahead of time about the possibility of organ and tissue donation is a smart move, one akin to registering as an organ donor.

Here's why to donate to research: Some research can only take place with fetal tissue, as Jessica Mason Pieklo of Reproductive Health Reality Check points out in an interview with Bustle. The American Society for Cell Biology lays out the reasons fetal tissue research is so important, and articulates the huge social benefit to working with these rapidly dividing, highly adaptive cells. The practice is very long established, and the organization points out that fetal tissue could contribute to huge developments for science, like the development of the rubella and varicella vaccines, both of which were invented with fetal cell lines. That's research we'd be missing out on without generous donations from patients who terminate their pregnancies.

For those considering abortion or those who might need the procedure in the future, thinking ahead of time about the possibility of organ and tissue donation is a smart move, one akin to registering as an organ donor.

Working with fetal tissue has been a subject of considerable controversy, as some may remember from the battles over stem cell research. Notably, Obama lifted the Bush moratorium on using pluripotent stem cells shortly after entering office. His move signaled a new era for biomedical research in the U.S., one dictated more by actual science that ideology. Researchers can study normal fetal development, identify genetic conditions like Parkinson's and Alzheimer's, and research fetal abnormalities and miscarriages to learn more about how to care for pregnant patients who want to keep their pregnancies. In that sense, the Right is actually shooting itself in the foot by opposing such research, as it could save lives in the future.

For those interested in donating fetal tissue, Pieklo says the first step involves actively asking their providers to find out if donation is available at their clinics, "to say 'this is something I'm interested in,'" she explains. Many providers won't ask their patients about donation because it's a sensitive subject, so it's important to be proactive. This is especially true in the case of miscarriages — patients can donate material from spontaneous abortions as well as induced ones, but the devastation of a miscarriage can make a conversation about using the fetus for research an understandably emotional subject.

Moreover, the skills and facilities needed for organ and tissue collection aren't actually available at all Planned Parenthood clinics, and it's not safe to rely on the belief that a facility can even offer the service. A bunch of Planned Parenthood clinics that don’t even offer donations have been targeted, Pieklo says. "It’s ridiculous, but it also speaks to the idea that there’s an assumption that all reproductive health facilities have a wide and full range of facilities available."

This is an assumption with broader implications, as the Right is fond of focusing on the abortion care aspects of Planned Parenthood, even though the organization spends only a fraction of its funding — three percent, to be precise — on actual abortion services. Organ and tissue donation accounts for a very small amount of Planned Parenthood's activities, so if it's doing so for profit, it's doing a really bad job of it.

Your donation could go into research that prevents miscarriages, helps treat abnormalities of fetal development, contributes to genetic therapies to treat conditions like Parkinson's, and a variety of other medical advances.

If you want to donate and your clinic offers the service or refers you to one that does, you're going to face a lengthy discussion that will include an overview of what will happen and how your donation will be used. Directed donation isn't available, and you won't know where the tissue ends up, something that will be discussed in the process. You'll also be asked to sign an informed consent form indicating that you understand the specifics of fetal tissue donation and that you aren't being coerced or induced to donate. Here's an example of a consent form used in fetal tissue donation. As you can see, it doesn't leave much to the imagination.

No one will pressure you to sign the form — if you decide that you're not comfortable with donating after discussing the specifics, your provider can move forward with the abortion sans donation.

Planned Parenthood facilities are one among many hospitals, tissue banks, and clinics that collect and store donated fetal tissue. All of them charge small fees for donated materials, as storage isn't free, and securing facilities to maintain confidentiality costs money. These facilities all act as the third party between patients and the biomedical research firms that process donated tissue and make it available to researchers in either fresh or frozen state. Your donation could go into research that prevents miscarriages, helps treat abnormalities of fetal development, contributes to genetic therapies to treat conditions like Parkinson's, and a variety of other medical advances.

That's pretty cool, and a far cry from the ghoulish nightmares being painted by the right in an attempt to shut down Planned Parenthood. The pro-choice fight requires a lot of battles, but if the right is going to turn your body into a political football, you might as well punt it and contribute to medical research that will save lives.

More like this
10 Organizations To Support On Latinx Women's Equal Pay Day
By Caroline Burke and Mia Mercado
Dyson Is Dropping Futuristic, Air-Purifying Headphones
By Rachel Lapidos
MOBO Awards Found Kanya King On The Woman Whose Grit & Determination Spur Her On
By Kanya King
Here's How To Support Jewish People Amid Rising Antisemitism
By Hannah Orenstein
Get Even More From Bustle — Sign Up For The Newsletter