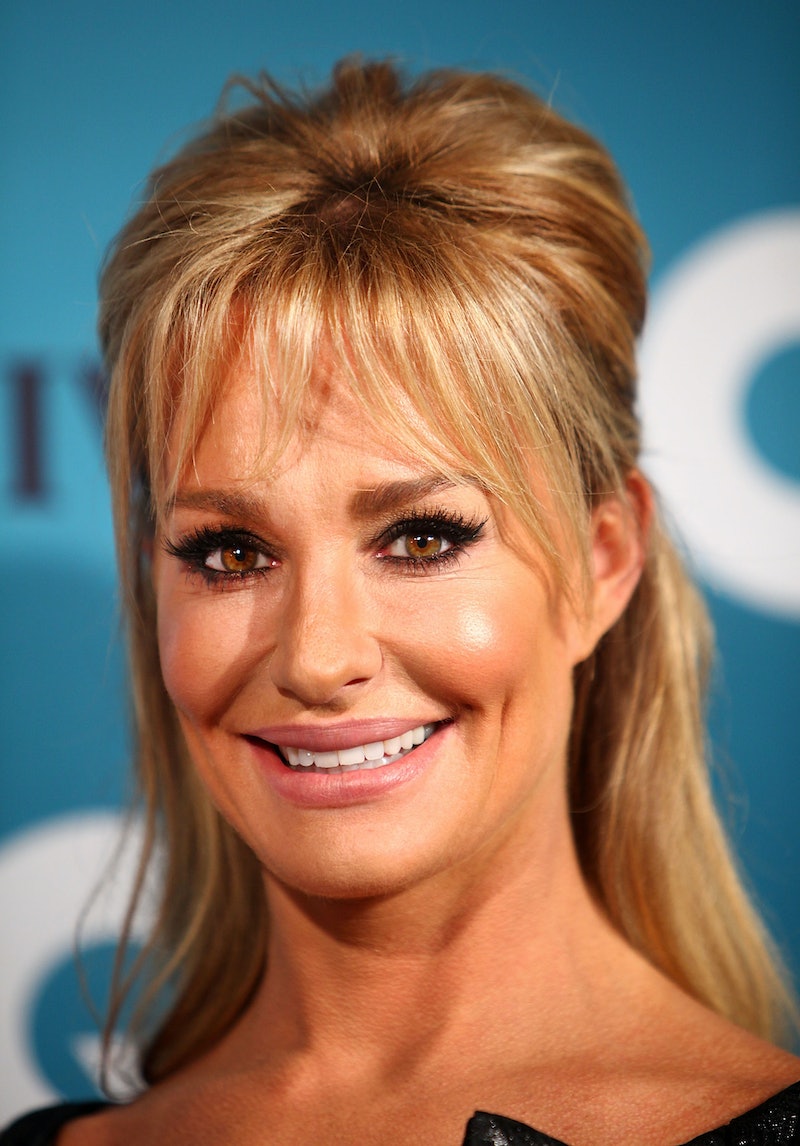 Welcome to the latest episode of musical chairs: Real Housewives edition. Seriously, with the nonstop cast-swapping, firings and replacements, that’s precisely what it feels like to innocent bystanders struggling to keep up with all the shenanigans. Anyway, according to Radar Online, Taylor Armstrong might return to RHOBH as a full-time cast member. Of course, this is just a rumor — this speculative spark has yet to be confirmed by Bravo or the former housewife who left the show in 2013 only to return for a few downgraded cameo appearances.

However, if it were to happen, I'm here to tell you all how now's the perfect time for Armstrong to make her second splash in RHOBH's Olympic-sized pool.

First off, if Armstrong happens to be one of your favorite Real Housewives , then you'll totally back me when I say that although her initial stint on the show wasn't the smoothest, she's definitely come out on top since then. After enduring the horrifying experience of losing her ex-husband, who took his own life, she's gotten remarried, to lawyer John Bluher. When she first appeared on RHOBH, Armstrong said she wasn’t able to be herself. Now that she's moved on, hopefully she'll be able to give us a peek at the more jovial side she says she wasn't able to display back then.

And let's discuss that marriage, shall we? Not only did she move on to find love again, Armstrong and her new hubby managed to finagle a ceremony out of WEtv’s My Fair Wedding. (Reality TV perks, FTW.) Since they appeared on Couples Therapy , Armstrong's new marriage is an RHOBH storyline in the making — hopefully in a good way.

Finally, Armstrong's already acquainted with RHOBH vets Lisa Vanderpump and Kyle Richards, so if she rejoins the cast, the transition should be pretty easy. Also, with Lisa Rinna and Eileen Davidson as cast members (if they return for next season), the chemistry won't be the same as before — a great way to mix the old with the new while keeping the show fresh at the same time.

That said, it would be interesting to see how the Armstrong would handle stepping in to fill the vacancy left by Brandi Glanville, who recently left RHOBH. She's been through a lot, but I have no doubt that Armstrong's still a total toughie who can handle the RHOBH drama for a second time around.

More like this
Everything To Know About 'RHONY' Season 14
By Jake Viswanath, Alyssa Lapid and Brad Witter
Everything To Know About 'The Real Housewives Ultimate Girls Trip' Season 4
By Jake Viswanath
Andy Cohen Apologized To Larsa Pippen After A 'RHOM' Season 5 Reunion Dust-Up
By Brad Witter
'RHOP' Stars Robyn & Juan Reportedly Got Remarried & Filmed The Ceremony
By Brad Witter
Get Even More From Bustle — Sign Up For The Newsletter
From hair trends to relationship advice, our daily newsletter has everything you need to sound like a person who’s on TikTok, even if you aren’t.