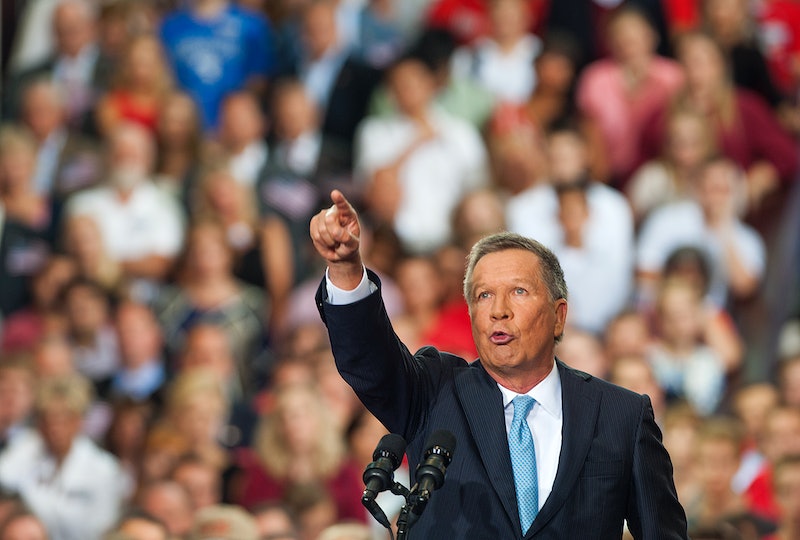 Republican candidates for the 2016 race for the White House now have another competitor. John Kasich announced his candidacy on Tuesday at Ohio State University, his alma mater. The Ohio governor will have to get a lot of attention to compete with bigger names, such as Jeb Bush and Donald Trump. But if these terrible quotes from Kasich are any indication, it seems like his campaign will likely struggle with his offensiveness.

Kasich's announcement speech hit on economic, health care, and student debt issues, and he also made sure to mention his experience working under Ronald Reagan, which is a glistening Republican resume to have, along with being from Ohio, a swing state. "The sun is rising, and the sun is going to rise to the zenith in America again. I promise you," he said.

Sometimes compared to Trump because of his "I tell it like I see it" attitude, Kasich has a few past quotes already darkening his campaign. Cleveland.com asks the question, "Is John Kasich too big a jerk to be president?" He might be. Kasich has made some pretty damning statements, which range from questionable to all-out offensive. Here are seven quotes from the newest Republican candidate, revealing that yes, Kasich might be too big a jerk to be president:

I don't need your people.

On Entering The Race

According to Politico, a donor questioned why Kasich would wait so long to enter the presidential race. With his famous temper, Kasich snapped:

You don't know what you're talking about.

In Ohio, Kasich threatened lobbyists who might try to go against him, according to The Los Angeles Times. Shortly after winning the election for governor, he called a luncheon for the entire lobbyist community and said to them all:

If you’re not on the bus, we’ll run over you with the bus. And I’m not kidding.

Reporters clearly aren't Kasich's favorite people in the world. (Let me go cry myself to sleep.) In his book Stand for Something, Kasich said:

The real question journalists of every stripe should be asking is, "Am I pimping this story or am I reporting this story?"

Kasich has complained that much of his party, religious as they are, does not believe in legislature that gives to the poor, while he says his own religious background calls him to support the working class. According to Politico, when contributor Randy Kendrick questioned Kasich's decision to expand Medicaid, he pointed at her and said with a raised voice:

I don’t know about you, lady, but when I get to the pearly gates, I’m going to have an answer for what I’ve done for the poor.

The Atlantic's Molly Ball wrote a feature article on Kasich's prickly personality. She spent several days with him, and he made it a point to tell her that neither he nor his wife read the magazine, according to her story. He also said that her job writing about politics was "a really dumb thing to do."

On A Certain Police Officer

Kasich was pulled over for passing an emergency vehicle with his lights displayed. Kasich tried to explain that he didn't see any emergency vehicle and therefore didn't yield, but the officer ticketed him for a driving violation. As unpleasant as that situation is for anyone, Kasich brought up the incident in a speech to Ohio EPA workers. According to Cleveland.com, he said about the officer:

He's an idiot! We just can't act that way. What people resent are people who are in the government who don't treat the client with respect.