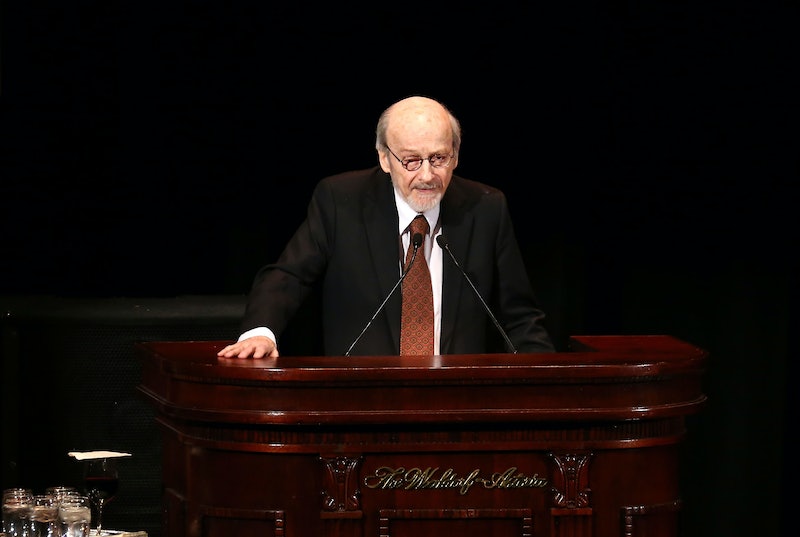 The 84-year-old fiction author E.L. Doctorow died Tuesday, and the man who was remembered by The New York Times as a "relentless experimenter" left behind a legacy of admired novels and remarkable prose. So remarkable, in fact, that many of the best E.L. Doctorow quotes provide a magnificent look inside the renowned author's process. Doctorow, who was best known for his novels Ragtime, Billy Bathgate, and The March, began writing at the early age of 9, according to NPR, following in the steps of his namesake, Edgar Allan Poe. Doctorow's full name is Edgar Laurence Doctorow. Starting so young gave him an extraordinary amount of time to craft extraordinary works, and it shows.

In a 2004 interview with NPR's Morning Edition, Doctorow explained how he first came to be a writer. "I was reading constantly, everything I could get my hands on. At that age, something else happens if you're going to be a writer. You're reading for the excitement of it… and then another little line of inquiry comes into your head: 'How is this done?'"

Doctorow quickly figured out the process, and his written works would go on to become award winners and best sellers. Here are nine of the most inspiring quotes Doctorow ever said or wrote.

George Plimpton interviewed Doctorow on the craft of writing, and the interview was published in full on The Paris Review's website. Speaking about the process — and how his children noticed he was always hiding in a book — Doctorow said:

Writing is a socially acceptable form of schizophrenia.

In the same interview, when asked if he spends his day noticing things in the world and thinking to himself, "Ah, that will work in a book," Doctorow said it's not like that at all.

I don’t think of myself as an observer. I feel things and have to work back from my feelings, my intuitions, to what must have caused them.

On The Writing Process

Again in an interview with Plimpton, Doctorow described writing as only an author could.

I tell them it’s like driving a car at night: you never see further than your headlights, but you can make the whole trip that way.

Doctorow explained the core definition of friendship when he wrote in Ragtime:

We are all good friends. Friendship is what endures. Shared ideals, respect for the whole character of a human being.

On Being A Responsible Citizen

In 2004, Doctorow was criticized for controversial statements he made during a commencement address at Hofstra University. According to The Washington Post, he spoke out against then-President Bush, saying the president was guilty of telling untrue stories. Doctorow was booed, but he stood behind his statements, stating "simply because something was said by authority did not mean it shouldn't be questioned." He asked:

I thought we were all supposed to speak out? Isn't that what this country is about?

Doctorow saw a significant connection between words and music. He wrote in Homer and Langley:

Although Doctorow originally listened to music while writing because he could find words in the melodies, he eventually preferred silence. He told NPR:

I seem to appreciate quiet. When I'm writing, I like to seal everything off and face the wall, not to look outside the window. The only way out is through the sentences.

Also from Ragtime, Doctorow showcased some of that remarkable prose when he wrote:

It was evident to him that the world composed and recomposed itself constantly in an endless process of dissatisfaction.

Like many authors, Doctorow wasn't always convinced he was the writer he hoped he'd be. In an 1980 New York Times interview, he said about writing The Book Of Daniel:

I was desolate. I was finished. I actually gave up. I sat down at the typewriter recklessly and irresponsibly, full of rage and frustration and despair, and just to do something, almost in mockery of the pretense of writing, I began to type something. I didn't even know what it was. What it was of course was the book I had been looking for, struggling for.

More like this
‘The Mosquito Coast’ Book Ending Includes A Major Character’s Death
By Brad Witter
Allie Rowbottom Will Have Her Feminism With A Side of Botox
By Samantha Leach
The 'Firefly Lane' Book Ending Teases Way More Tears To Come In 2023
By K.W. Colyard
'Bridgerton' S3 Teases Exciting Social Season For Penelope Featherington
By Bustle
Get Even More From Bustle — Sign Up For The Newsletter