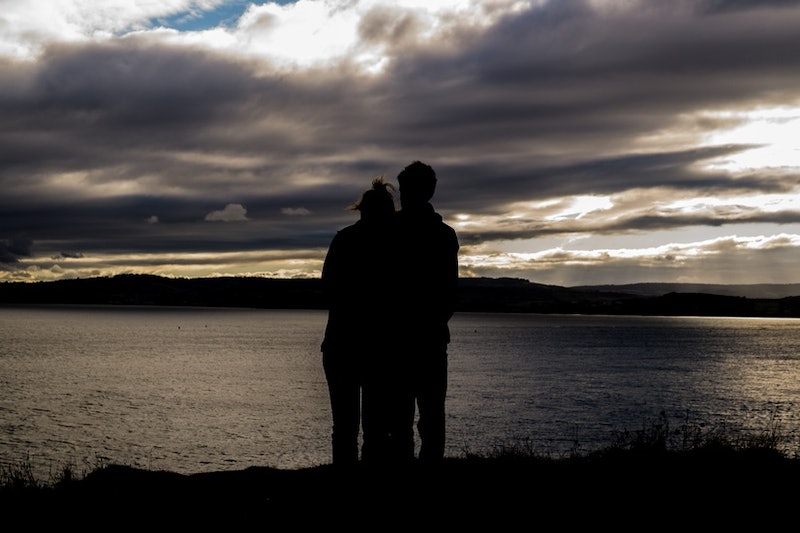 What's the key to a lasting relationship? It may be your ability to deal with unflattering comparisons. New research finds that comparing your partner to someone else's could be a "key source of stress and conflict," unless you view you and your partner as a unit. The University of Toronto Ph.D. candidate Sabrina Thai looked at the effects of comparisons on relationships. Basically, when you compare your partner to someone else's you will likely find that the other partner is smarter or sexier or kinder or something-er than yours. But, if you view you and your partner as more of a team — if you're more likely to think in terms of "we" rather than "I"— you are more likely to downplay the importance of that trait and "[protect] a partner from the negative implications" of the comparison. Psychologists dub this "self-other overlap."

This can have a large impact on success of long-term relationships, as Thai puts it: "Our studies provide the first evidence that people do compare their partner to others with significant consequences for the relationship. People who are low in self-partner overlap have difficulty maintaining positive partner perceptions following threatening comparisons of their partner to others. This may be a key source of stress and conflict in people's relationships." So how does it work? The researchers give the following example:

When Julie compares her husband George to her friend's husband Sam, she can't help but notice that Sam is better is better at helping his children with homework. But rather than be upset about George's shortcomings in the children's homework arena, Julie reasons that since she enjoys doing homework with their children, it's not that important that George do it. What Julie has just done is protect her partner (and their relationship!) from the negative implications of her own comparison.

So it looks like the best thing for your relationship is try to (within reason) keep yourself from getting hung up on comparisons. But whats not all— here are some other predictors of long-term relationship success:

1. Your Level Of Agreeableness

That's right — not looks, not money, not a 10 inch penis that tastes like bacon, but agreeableness. According to Ty Tashiro, relationship expert and author of The Science of Happily Ever After: What Really Matters in the Quest for Enduring Love looked at one study of 168 people and found "the best variables for predicting who would stay married, even better than love, expressions of affection or negativity, was responsiveness, which is closely related to the trait of agreeableness," according to the New York Post. But it's not just about personality, Tashiro said that "Men high in agreeableness are not only more likely to be kind, but also more likely to keep the sexual desire alive in relationships." I'm convinced.

For reals. According to The Telegraph the creators of OkCupid came up with the three questions most likely to show long-term compatibility, "based on a 'compatabilty algorithm' they created from the answers to survey questions." If you match up on your answers to "Do you like horror movies?", "Have you ever travelled around another country alone?", and "Wouldn't it be fun to chuck it all and go live on a sailboat?" you are most likely to be a long-term success. Who'd a thunk it?

According to Psychology Today: "Dr. John Gottman of the University of Washington, a foremost expert on couple studies, concluded after over 20 years of research that the single, best predictor of divorce is when one or both partners show contempt in the relationship." This is when communication is undermined by attacking the person you're fighting with rather than talking about the issue. So no hitting below the belt.

4. Whether There Are Fire Works In Your Brain

SCIENCE. OK, so researchers from Stony Brook University looked at people who had recently fallen in love, and by looking at electrical activities in the brain they could predict whether the activity was strong enough that they would stay together in the long-term. Nuts, right? Brain scans as a first date idea, anyone?