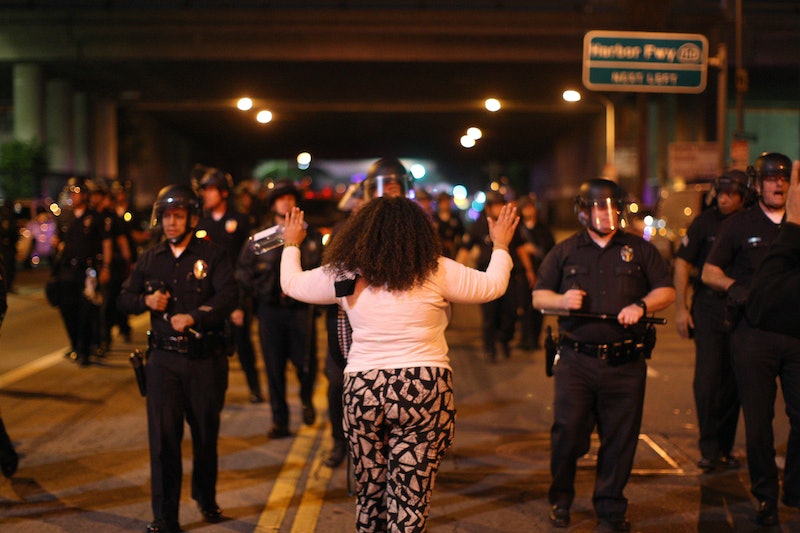 In one week alone, two unarmed African-American women died while in police custody. The deaths of Sandra Black, a 28-year-old woman from Illinois, and Kindra Chapman, an 18-year-old woman from Alabama, have renewed national discussion of the policing and extrajudicial killings of black Americans — particularly black women, who are often left out of the conversation. Yet just how many black women have died in police custody? The statistics can often be vague and incomplete, but they do highlight one cause of concern: Black women who die in police custody do not receive the attention they deserve.

At this time, there is no comprehensive list of black women who've died in police custody, nor are the national statistics on arrest-related deaths fully complete. "Like data for all police shootings, that on Black women is irregular, making it impossible to calculate the exact number of women killed by the police," Rachel Anspach of the African American Policy Forum, which runs the Say Her Name campaign, told Bustle in an email.

So let's start with the report from the Bureau of Justice Statistics, which has tracked arrest-related deaths in the United States between 2003 and 2009. From the data collected by the BJS, it's obvious that men are much more likely to die while in police custody than women: An overwhelming 95.5 percent of those 4,813 arrest-related deaths were male, while 4.5 percent — 218 victims in all — were female. It's worth noting that women were likely to die from either natural causes or intoxication while in police custody; however, nearly half of the deaths were still attributed to homicide.

When the BJS broke it down by race, the agency found that around 32 percent of arrest-related deaths between 2003 and 2009 were African-Americans, while nearly 42 percent were white Americans. These statistics don't note whether or not the victim was armed at the time of their arrest.

While there's no major discrepancy between black and white Americans here, we do know that black Americans are disproportionately affected by not only policing, but also arrest-related deaths. As PunditFact pointed out in 2014, saying "whites are killed by police officers more often than black people" is a half-true claim. "In a country that is about 63 percent white and 12 percent black, the probability that an African-American will die in a confrontation with police is much higher than for whites," PunditFact found.

Yet delving deeper into the statistics between black men and black women is where things get murkier. As other fact-checkers have pointed out over the last year, the claim that a black man or woman is killed by a police officer every 28 hours, first put forward by the Malcolm X Grassroots Movement, is most likely false. USA Today, using data from the FBI, found that the statistic is more like 96 black Americans, on average, are killed by police each year.

The astonishing dearth of data on the deaths of black women led the African American Policy Forum to create a database documenting police violence against black women, which includes sexual assault as well as extrajudicial killings. The database, combined with ongoing reports, is less about tracking hard date, and more about calling attention to "the reality that Black women face police brutality at alarming rates," according to Anspach.

A July 2015 report from AAPF and the Say Her Name campaign addresses the paucity of hard data of black women dying while in police custody, but even the report can't produce a solid number. "The stories of police violence included in this document are essentially either gathered through online research or cases that have come to the attention of the report’s authors," the Say Her Name authors wrote. "Many cases have never seen the light of day … Significantly more women who have been killed by the police are missing from these pages, but their lives are certainly no less valuable."

The report does note, however, that arrested-related deaths of black women are consistent, expected, and perhaps even on the rise. The body count of black women who've died in police custody "continued to rise in 2015 with the killings of Alexia Christian, Meagan Hockaday, Mya Hall, Janisha Fonville, and Natasha McKenna," the authors wrote.

And now, unfortunately, Sandra Bland and Kindra Chapman have been added to that growing list.