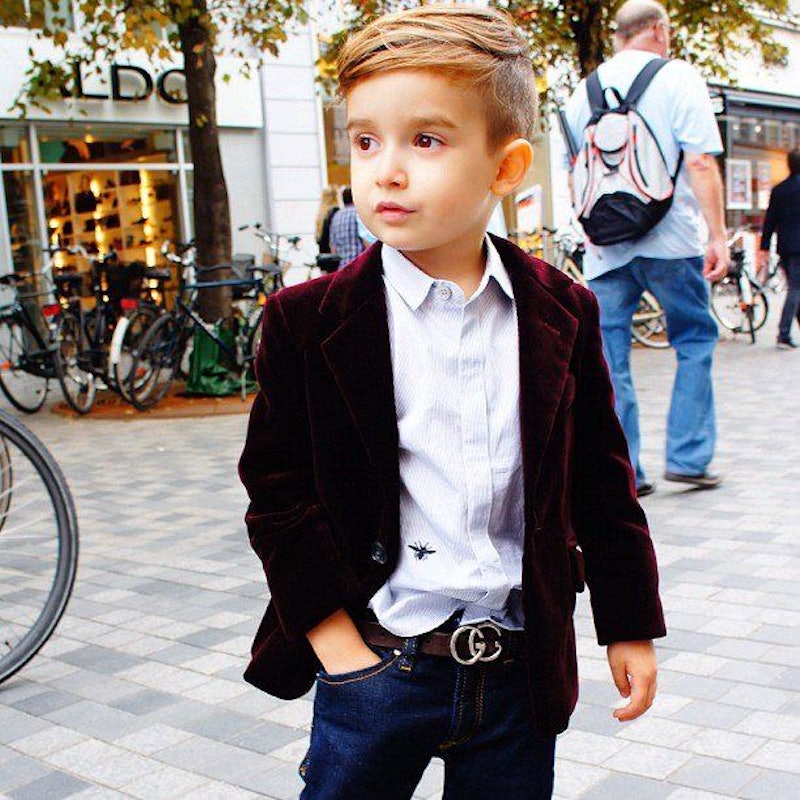 When you first see five-year-old Alonso Mateo's Instagram, you might think it's a joke, the brainchild of College Humor or The Onion. And, admittedly, many of the factors comprising this story seem too good to not be satire. He lives in Laguna Beach. His mother is a personal stylist, and has contributed to Harper's Bazaar Mexico and Latin America. His father is the owner and CEO of a private equity firm. But they make up the very real life of fashion's latest style blog obsession.

Mateo has more than 2,500 followers on Instagram and nearly 15,000 Facebook fans, and it's easy to see why people would be so attracted to him: the kid's cute. He looks like a J.Crew model that someone left in the dryer for too long. The image of a kid not even old enough to need his second hand to count his age in Gucci loafers is adorably incongruous. Yes. I get that. I, too, taste the deliciousness of this Kool-Aid. But is it just me, or does it also have a distinctly bitter aftertaste?

Mateo's mother, Espinosa, defends her choices to dress her child in high fashion, telling The Cut , "I think people usually judge right away. When we go shopping, if he wants loafers just like his daddy and I can afford them, I get them." Well, that's nice that she's trying, but it's also the kind of logic that is so off the mark you wonder why she even bothered. An unhealthy obsession with material objects does not just happen to those who put themselves in debt by buying said objects. It also happens when people take more than they need, even if they can afford to take so much. Mateo is learning that, as long as you want something, and as long as you have money in your bank account, it can be yours. Never mind that it might not fit in a few months. Never mind that you don't need it.

Frivolous spending isn't the only issue here. I wonder from where Mateo is getting self-assurance. Physical attractiveness and nice clothes are the most basic and formidable source of confidence, but they derive from outside praise, not the self. I don't want to speak to how Mateo is being raised, since I know nothing about his life other than what he and his family make public, but I do worry about the ego of a toddler with a fashion blog. Learning to judge yourself by how others judge you is tremendously toxic.

Espinosa told The Cut that she lets her son continue with fashion blogging because he's "just having fun," but isn't part of growing up learning the distinction between good fun (a day at the park, a birthday party, a dinner with friends) and bad fun (activities that feel good simply and only because they garner attention and compliments)? Espinosa goes on to say, “I don’t think he really notices he’s fashion forward. He’s too young.” Exactly. Right now, Mateo has no idea that what he's doing isn't what every other five-year-old is doing. It is his not his responsibility to teach himself that not all fun is good, that not everything you can have should be yours. It is the responsibility of his parents.