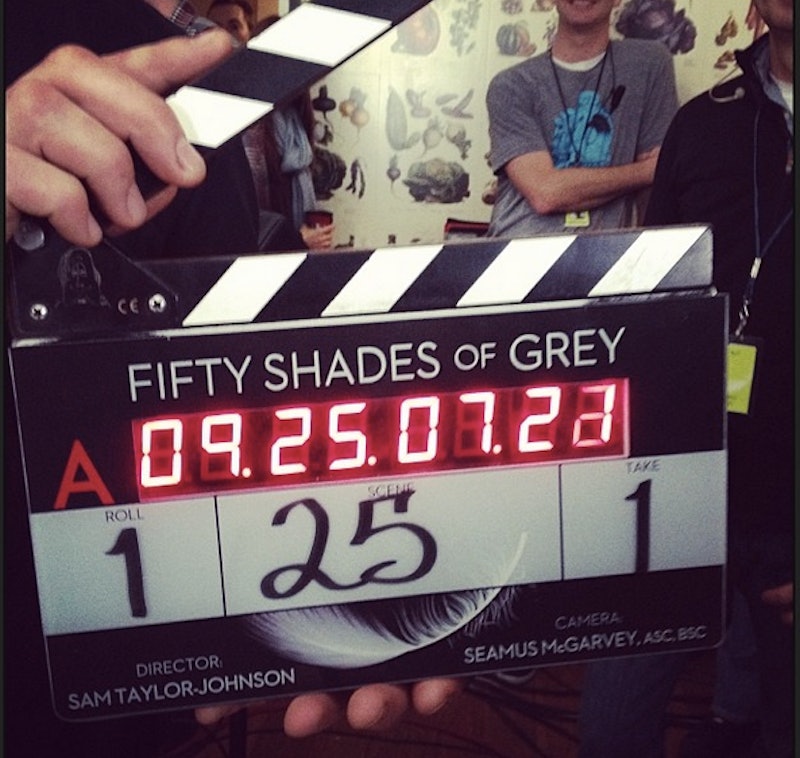 A dark, vaguely sexual cloud has descended over Hollywood today, and reports of an "inner goddess" roaming the streets have been confirmed. That's right, 50 Shades of Grey has (finally) begun filming. With a release date tentatively set for Valentine's Day 2015, the cast and crew will have to groan, sweat, and thrust their way to doing the book justice. I wonder, though, if it is possible to do such a game-changing work of fiction justice on the silver screen.

The screenwriter, Kelly Marcel, certainly seems up to the task. Her most recent writing success was the script she co-authored for Saving Mr. Banks, which has garnered attention from the critics and rumors of an Oscar nod. The director, Sam Taylor-Johnson, seems similarly overqualified, having directed Nowhere Boy, the interesting look at John Lennon's formative years. Even though both of these women seem completely capable of producing a movie that won't make me gag, I have a few questions.

First and foremost, how will they ever capture the masterful writing that defines 50 Shades? E. L. James is known as much for her sex scenes as for her inability to grasp basic English spelling and grammar, so the movie needs to capture this important facet in some fashion. Perhaps every piece of paper in the film--whether mail, the newspaper, or the "Rules"--will have multiple misspellings. Or maybe the dialogue will be so impossibly stilted that it mimics James' horrific slaughter of English diction.

Speaking of the writing, what about word choice? James' synonym sins are well known around the internet, and her misuse of words such as "errant" and "taciturn" make my big-word-loving blood boil. In case you skipped over the sex scenes and are unaware of these foibles, James often replaces great, short words with bigger, fancier numbers that she does not fully understand (and therefore misuses). Hopefully, the script incorporates some ridiculous nomenclature of its own into the dialogue to honor this 50 Shades hallmark. Perhaps Anastasia will need ask Christian to "confabulate" with her, or she will praise his "pulchritude."

All of these page-to-screen issues pale in comparison to what I affectionately refer to as The Inner Goddess Problem. As everyone in the United States with access to the internet knows, one of the major staples of Anastasia's character is her inner goddess and its various cries and movements. So will the film be goddess-less? I sincerely hope, that instead of erasing the inner goddess altogether, the creators of the film find a particularly strange Pixar animator to bring her to life on-screen. It may ruin the film's kinky appeal to have a cutesy animated woman yelling through all the sex scenes, but it would also be completely hilarious.

The final hurdle for this film to overcome will be the sex scenes themselves. I am confident that Hollywood is capable of believable BDSM (or whatever it is they do in 50 Shades), so I'm not concerned with mechanics. It is more the noises that bother me: for instance, will Anastasia actually say "Aargh" during sex? If she does, I'm sure the scene will sound more like prehistoric human procreation than the sex scenes our moms read on the subways. Also, if they are truly going to do these noises justice, George Takei needs to be consulted for a cameo. His trademark "Oh my" permeates Anastasia's thoughts, and needs to be properly represented in the film.