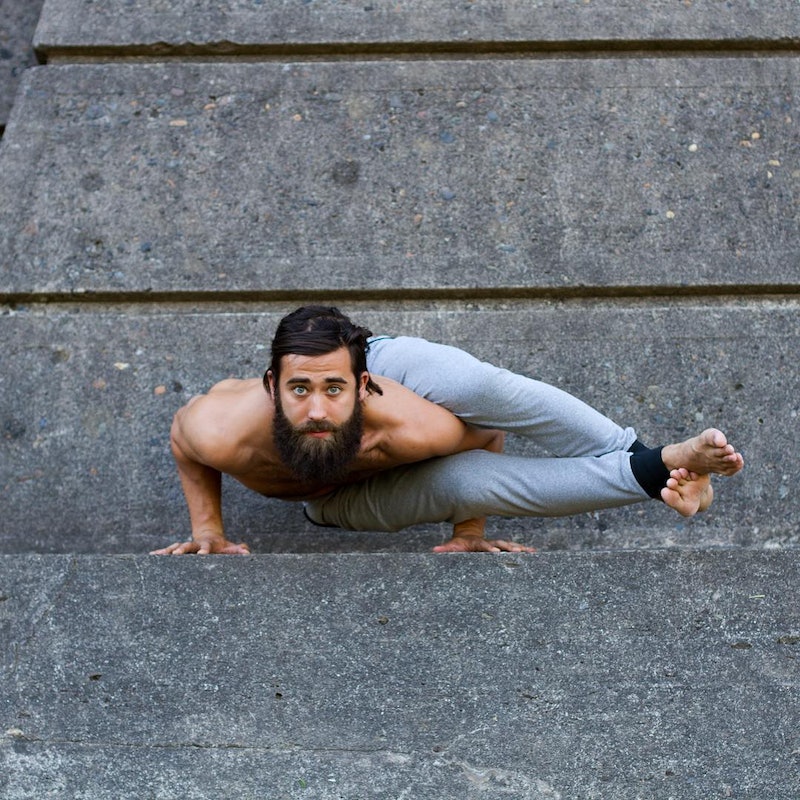 Teaching yoga is much more than a hobby these days. CNN recently ranked the top 100 careers in the United States, and guess what came in at number 10? Yep, teaching yoga. We don't exactly get paid well, but we still love our jobs. Because of this recent growth, you’ve probably got access to a wide range of teachers at your local studio, each one more entertaining than the next. I love how much diversity has been showing up on yoga’s doorstep — it means we'll rarely have a dull moment on our mats.

Since I started teaching yoga a couple years ago, I’ve wandered around to various parts of the world — the U.S., Thailand, Australia, Peru — and noticed that there are some common denominators amongst teachers, no matter the cultural and social contexts. Yes, they all love the yoga and have found some sort of healing through the practice, but a lot of them also share the same endearing, quirky personality traits — and tattoos.

In fact, I've narrowed it down to nine of the most common types of yoga instructors you're bound to encounter at some point in this lifetime. I'm sure I fall into one of the categories, but I'll let my students tell you which one.

She’s the woman who makes you love yoga — and the one whose postures mesmerize you. She has a genuine smile eternally plastered on her face, even when you’re holding extended side angle pose for an inhuman amount of time and your thighs are screaming at you — like Rachel Brathen, aka Yoga Girl. This beauty is super healthy all around and she wants her students to find peace and happiness through the practice, so she encourages you to listen to you body more than anything else.

2. The New Age Guy With Tattoos

I love this guy — he’s tough but sensitive, kind but hilarious. If you want a quintessential example of this instructor, pop onto the app Yoga Glo and take a few of Darren Rhodes’ classes. He’s a former wrestler who teaches Hatha Yoga, and you can’t help but love his, um, unique passion for the practice. As much as I tease him, though, New Age Guy is the real deal. He has a lot of respect for his students, and there’s a strong likelihood he used yoga to recover from addiction and now meditates daily.

This woman is super fit, and she’s into Crossfit or bodybuilding, but loves doing yoga to keep everything in balance. You probably follow her on Instagram because she just posts the cutest pictures of herself flexing in the morning, sans makeup, holding a green smoothie in one hand. She’s the teacher who talks a lot about how to treat hamstring or knee injuries, and she focuses on restorative postures that help your overall fitness regimen.

You’ve never seen another human being more excited about teaching yoga than this guy. He’s well-groomed and well-dressed — it’s not uncommon to see him totally rocking a pair of K. Deer Haute Yoga leggings. He does a lot of heart openers in his class, like Camel Pose, because he wants his students to feel in love with themselves. His enthusiasm never ceases to put me in a good mood, so I run to his vinyasa flow Sunday morning session for a solid pick-me-up.

Don’t underestimate these petite ladies because they pack a big punch in the sequences they teach. Women who fall under this category are often unassuming; they’re sweet at the front desk and can be shy at times, but they are confident in their teaching abilities and you end up sweating your a** off. Normally, they’re the long-term insructors. They’ve been at your studio for a while and do stuff behind the scenes; they’re even known to bring some vegan baked goods for everyone to snack on after a tough class.

At nearly every studio I’ve taught, there is at least one man or woman teaching regularly who is middle-aged or wiser. These characters found yoga at a critical part of their adult life and have since been hooked on how vibrant and young the practice makes them feel. They’re truly an inspiration to everyone at the studio, but don’t let their years of experience fool you — they still know how to have a good time.

He could be Aussie, South African, or even English, but the list wouldn’t be complete without including a man with an accent. He’s tan and has kind eyes, and he’s dealt with some injuries himself in the past, so he's compassionate with others. It’s a bit embarrassing, but this is my boyfriend to the T — he’s a surfer who’s been teaching for 10 years and loves to make people laugh at the studio, and he’s a surprisingly tender soul. Lucky me!

Ah, the person who thinks they're a guru. There’s definitely one at every yoga studio on the planet, and I’ve encountered my fair share. The Wannabe carts around books of Buddhist scriptures on a daily basis, is almost always on some sort of juice cleanse, and wears a lot of traditional Indian garb. They truly respect the Eastern roots of yoga and hopes to pass down the teachings to the students, but sometimes we can’t help but think they take themselves a little too seriously, especially when they quote Bikram Choudury.

There’s a chance that Ms. Gung-Ho is the studio owner, so she’s around a lot. She’s super serious about the practice and she can be a hard-ass on you, but it usually comes from a place of love. It’s hard to break your concentration when she’s teaching; there’s a presence about her that makes you want to do her class if you're going through a tough time. I don’t know about you, but I fidget a lot less in my savasana when she’s in charge.

More like this
When Did Pilates Become So Popular Again?
By Elizabeth Narins
7 Blogilates Weightless Arm Workouts That Bring The Burn
By Carolyn Steber
11 Upper Back Exercises That'll Help You Stand Upright
By Carolyn Steber
How To Do A Rocking Plank In Perfect Form
By Carolyn Steber
Get Even More From Bustle — Sign Up For The Newsletter