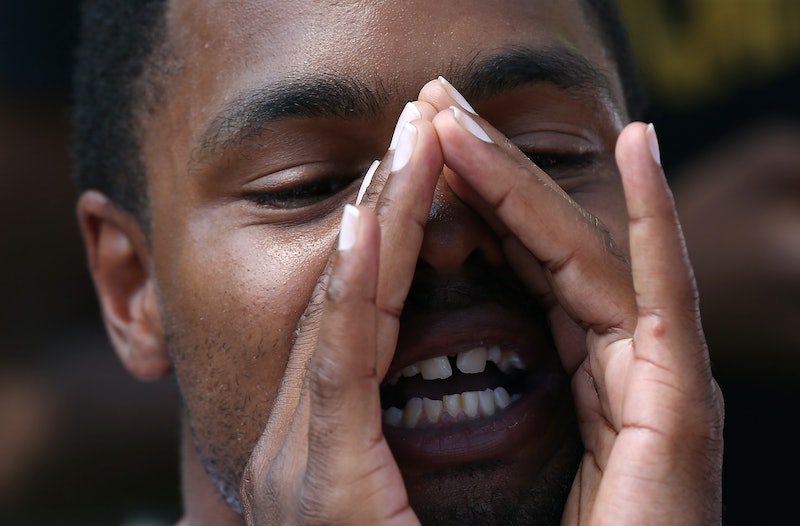 It's been just over a week since the death of Sandra Bland. A 28-year-old black civil rights activist, and a freshly minted employee of Prairie View A&M University, Bland was arrested during a traffic stop after she failed to signal a lane change. Just three days later, she was found dead in her jail cell. Thanks in large part to the relentless efforts of her fellow activists on social media, the questions haven't stopped. Here are 12 questions about Sandra Bland we still don't have answers to, and all of which are answers we need.

If you have the stomach for it, you can watch the police cruiser dashcam video of Bland's arrest here — but be warned, it's pretty distressing. What looks for all intents like it could have, and should have been a routine, uneventful traffic stop quickly escalated and turned violent, with Texas state trooper Brian Encinia pulling his Taser, threatening to "light" Bland up, ordering her out of her car, and ultimately forcing her to the ground. Encinia has since been placed on administrative leave.

Here are some of the questions we still need answered, even with the dashcam video hitting the internet.

1. Why Did Encinia Let His Previous Traffic Stop Off With A Warning?

Before pulling over Bland, Encinia had pulled over another woman in a dark red car, and he very cordially lets her off with a warning, going so far as to ask "you okay?" By comparison, when he asked how Bland was doing, he pointedly commented that she looked irritated, and when she explained why, things started escalating very quickly.

2. Why Did Encinia Turn Around Towards Bland's Car?

It's a moment that's been understandably overlooked in that intense dashcam footage, but it bears mentioning — Encinia circles back to follow Bland before pulling her over, pulling a U-turn as she passes him to his left.

3. Did Encinia Use His Turn Signal?

Did Encinia actually signal his turn, considering that's what he pulled Bland over for? If it's a vital safety necessity for civilians, it ought to be for police, too.

4. Why Did Encinia Speed Up Behind Bland?

The video lays it bare — after making the U-turn, Encinia speeds up to where he's behind Bland's car in relatively short order. He ostensibly pulled Bland over for failing to signal her lane change after he was right behind her, but then why did he close so quickly in the first place?

5. Why Did Encinia Ask Bland About Her Irritation?

There's no mystery why somebody would be irritated to get pulled over. It's as obvious a human reaction as it gets. Why ask? This was the start of the escalating tension between Encinia and Bland.

6. Why Did Encinia Tell Bland To Put Out Her Cigarette?

Bland was already clearly perturbed, and she was under no obligation to comply with this. When she refused, her ordered her out of the car like he'd been expecting it — "Well, you can step on out now." This is where things turned bad, and never got better.

7. Why Did Encinia Force Bland To The Ground?

Bland was officially arrested for assaulting a police officer, but the video makes it clear that Encinia decided to arrest her well before she was out of the car. Furthermore, while talking to a fellow officer near the end of the video, he says: "She never swung at me. She was just flailing, stomping around.”

8. Why Did Encinia Say "Good" When He Learned Bland Had Epilepsy?

This part seems about as far from "serve and protect" as it gets.

9. Why Did Encinia Tell A Citizen Filming The Arrest To Leave?

Let it be known that it's within your constitutional rights to film public police encounters. In fact, Bland thanked the bystander for getting a recording of her arrest.

This is far from impossible — as the Mayo Clinic details, people can suffer complications from injuries to the brain even days and weeks after the fact.

11. Why Would Bland Kill Herself?

Suicide can be a wholly unpredictable thing, to be sure, but there still isn't a clear reason why Bland would've taken her own life. In fact, during her arrest, she was vocally enthused at the idea of taking the case to trial.

12. If Bland Killed Herself, How Exactly Did It Happen?

This'll be one for the forensics experts, and given that the case is being treated like a homicide, according to authorities, we'll probably get a more detailed description eventually — if Bland killed herself, how did it happen?

It's so far been suggested that she hung herself with a garbage bag, but a detailed investigation and explanation of the inside of her cell and how she allegedly accomplished this would go a long way.