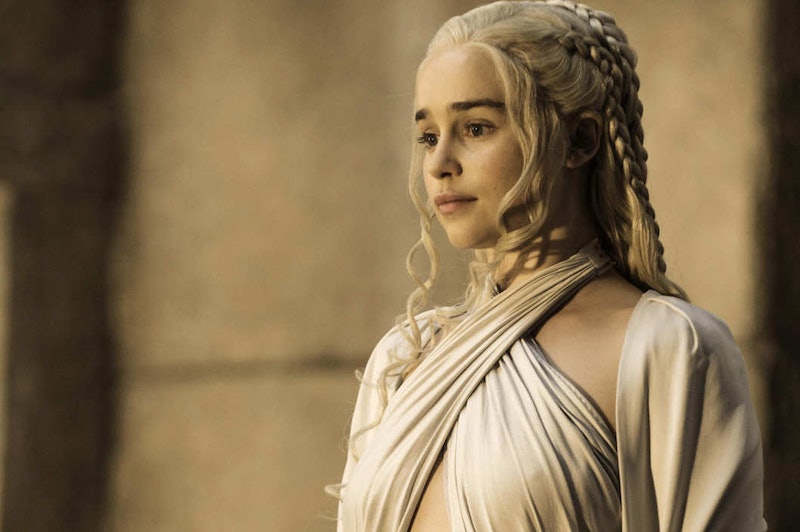 There are many reasons Jon Snow can't die on Game of Thrones. First and foremost, I'm not sure how I can get through a season without seeing Kit Harington's beautiful face. Second, Jon is literally the "Song of Ice and Fire." I believe the theory that Ned Stark is actually Jon's uncle, not his biological father — that the bastard of Winterfell's actual father was Prince Rhaegar Targaryen, and his mother was Ned's sister, Lyanna Stark. This means that Jon Snow has both Stark and Targaryen blood running through his veins, and that he and Danaenerys Targaryen and are related.

This belief is known to Game of Thrones fans as the R+L=J theory, and I lived my life by it for the whole past season, you guys. There have definitely been clues that the two are linked. In fact, this latest season has presented a ton of parallels between Jon and Dany, including their decisions to behead traitors and their overall experiences as people in positions of power. Still not convinced that Jon is a Targaryen? Here are seven quotes from Daenerys that prove she and Jon Snow are totally related.

1. "When my dragons are grown, we will take back what was stolen from me and destroy those who wronged me! We will lay waste to armies and burn cities to the ground!"

Dany's dragons have been by her side since they were birthed by fire at the end of Season 1. Though she has her advisers and her Unsullied, those dragons are her greatest asset. Though Dany is talking about her dragons when she says that "we will take back what was stolen from me," she could also be talking about Jon Snow. If she finds out that Jon is a Targaryen, then she and the former Lord Commander of the Night's Watch would be a force to be reckoned with. Together, they could easily take Westeros by storm.

Obviously, Dany is a woman. However, if Jon Snow is truly Rhaegar Targaryen's son, then he is the last dragon. A dragon is much more than a man, which means that he can't be easily killed. I promise we haven't seen the last of Jon.

Dany's repugnant brother Viserys was scalded to death when Khal Drogo poured molten gold on his head. Though George R.R. Martin has stated that the Targaryens aren't immune to fire, Viserys wouldn't have died if he was a true dragon. The Night's Watchmen will presumably burn Jon's body to ensure that he doesn't come back as a Wight. If Jon is a true dragon, he could be resurrected through that fire.

Jon Snow rose quickly up the ranks in the Night's Watch to the highest position of Lord Commander. As a bastard with no claim or title, this is almost unheard of. His was a miserable life, but Jon has defied the odds.

5. "They have my dragons. A mother does not flee without her children."

Dany is the Mother of Dragons (literally). However, if Lyanna Stark is Jon Snow's mother, then she is the mother of the last dragon. Lyanna died, but not before pleading with her brother Ned to raise Jon as his own. It was vital that she knew her son would be well cared for.

6. "They can live in my new world or they can die in their old one."

At one time, the Targaryens were the most powerful House in Westeros. Despite naysayers, Dany is trying to return her house to its former glory. If Jon really is a Targaryen, and he survives his stab wounds or is resurrected, he could be a vital component in Dany's plans for a new Targaryen dynasty.

Several houses have been fighting for the Iron Throne. If Jon Snow is the last dragon, then he and Daenerys could definitely shatter the wheel.

Are you a believer yet?