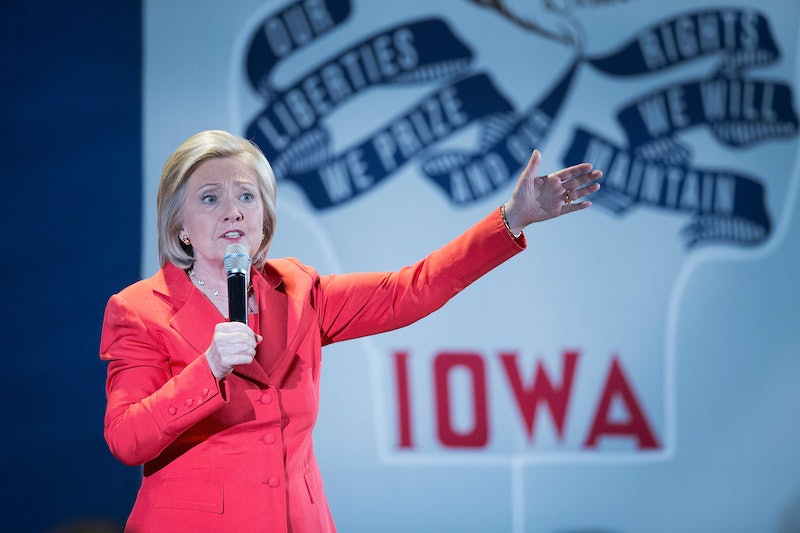 Hillary Clinton has made it clear that equality is a major part of her 2016 presidential campaign, whether that's in regard to gender or sexuality or race. Along with her Democratic competitor Bernie Sanders, Clinton continues to give impassioned speeches about race relations in the U.S., both at campaign events and in response to tragic events like the Charleston shooting in June. In a Facebook Q&A on Monday, Clinton declared that "black lives matter," positioning herself as an ally for the nationwide movement. Clinton's past quotes on race show not only that she recognizes that America lacks racial equality, but also that she prioritizes it as a major problem for the country.

America's systemic racial discrimination is becoming harder to ignore — finally, the number of unarmed black people killed by the police, fatal racially motivated attacks, and the disproportionate amount of people of color in jail are gaining the attention of the press and public. Clinton is positioning herself as the "equality candidate," and her focus on race issues suggests that, as president, she would aim to stand up for all types of civil rights and work to better the nation's race relations.

Here are seven of Clinton's most powerful quotes on race relations in America.

During the Facebook Q&A, Clinton was asked: "As the leader of this nation, will you advance a racial justice agenda that will dismantle — not reform, not make progress — but will begin to dismantle structural racism in the United States?" She responded:

Black lives matter. Everyone in this country should stand firmly behind that. We need to acknowledge some hard truths about race and justice in this country, and one of those hard truths is that that racial inequality is not merely a symptom of economic inequality. Black people across America still experience racism every day. Since this campaign started, I've been talking about the work we must do to address the systemic inequities that persist in education, in economic opportunity, in our justice system. But we have to do more than talk — we have to take action. For example — we should make sure every police department in the U.S. has body cameras. We should provide alternatives to incarceration for low-level offenders. We should invest in early childhood education for every child. We should fight for voting rights and universal voter registration.

On The Charleston Shooting

Following the Charleston shooting that killed nine at a historically black church June 17, Clinton talked about America's racism problem in a speech at the U.S. Conference of Mayors. She said:

It is tempting to dismiss a tragedy like this as an isolated incident, to believe that in today’s America, bigotry is largely behind us, that institutionalized racism no longer exists. But despite our best efforts and our highest hopes, America’s long struggle with race is far from finished. I know this is a difficult topic to talk about. I know that so many of us hoped by electing our first Black president, we had turned the page on this chapter in our history. I know there are truths we don’t like to say out loud or discuss with our children. But we have to. That’s the only way we can possibly move forward together. Race remains a deep fault line in America. Millions of people of color still experience racism in their everyday lives.

On The Confederate Flag

Also in relation to the Charleston shooting, Clinton condemned the use of the Confederate flag, saying:

I appreciate the actions begun yesterday by the governor and others in South Carolina to remove the Confederate flag from the statehouse, recognizing it as a symbol of our nation’s racist past that has no place in our present or our future. It shouldn’t fly there, it shouldn’t fly anywhere.

On The Criminal Justice System

In a speech at Columbia University in April, Clinton acknowledged that the U.S. criminal justice system racially discriminates. She said:

There is something profoundly wrong when African-American men are still far more likely to be stopped and searched by police, charged with crimes, and sentenced to longer prison terms than are meted out to their white counterparts. There is something wrong when a third of all black men face the prospect of prison during their lifetimes. We have allowed our criminal justice system to get out of balance and these recent tragedies should galvanize us to come together as a nation to find our balance again.

On Race In Elections

When speaking to the American Bar Association in 2013 about racial discrimination in elections, Clinton said:

Not every obstacle is related to race, but anyone who says that racial discrimination is no longer a problem in American elections must not be paying attention. And despite the best efforts of many well-intentioned election officials, discrepancies, and resources across precincts and polling stations still disproportionately affect African-American, Latino, and young voters.

In a speech at Texas Southern University in June, Clinton called for a reform of America's voting system, pointing out that the current system makes it much more difficult for minorities to vote in elections. Clinton said:

It’s not a surprise for you to hear that studies and everyday experiences confirm that minority voters are more likely than white voters to wait in long lines at the polls. They are also far more likely to vote in polling places with insufficient numbers of voting machines.

That’s why, as a Senator, I championed a bill called the Count Every Vote Act. If it had become law, it would have made Election Day a federal holiday and mandated early voting opportunities. Deceiving voters, including by sending flyers into minority neighborhoods with false voting times and places, would have become a federal crime. And many Americans with criminal convictions who had paid their debts to society would have finally gotten their voting rights back. Well today, with the damage to the Voting Rights Act so severe, the need for action is even more urgent. First, Congress should move quickly to pass legislation to repair that damage and restore the full protections that American voters need and deserve.

In response to the 2014 Ferguson riots that erupted after a police officer fatally shot Michael Brown, Clinton asked white people to put themselves in black people's shoes, saying:

Imagine what we would feel and what we would do if white drivers were three times as likely to be searched by police during a traffic stop as black drivers instead of the other way around. If white offenders received prison sentences ten percent longer than black offenders for the same crimes. If a third of all white men — just look at this room and take one-third — went to prison during their lifetime. Imagine that. That is the reality in the lives of so many of our fellow Americans in so many of the communities in which they live.