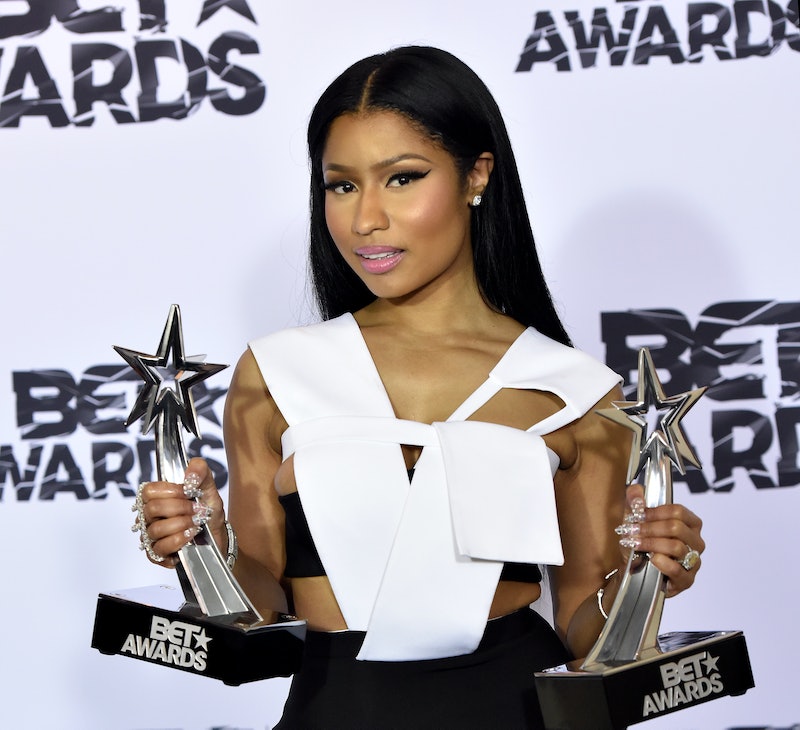 Just in case you didn't feel the Internet explode on Tuesday night, Nicki Minaj and Taylor Swift got into it on Twitter, sparking a conversation that involves the intersection of race and feminism, all packaged into a discussion about the 2015 MTV Video Music Awards. Here's the deal: Nicki Minaj was angry that her "Anaconda" and "Feelin' Myself" music videos weren't nominated for Video of the Year, a misstep she felt was attributed to race. She voiced this opinion on Twitter, and Taylor Swift thought the rapper was coming after her due to the fact that she's a VOTY nominee for "Bad Blood." Swift retaliated in a surprise move from the singer, whose online presence is usually very carefully crafted. The whole "feud" had entertainment outlets everywhere hopping on the story, which, interestingly enough, only fed into the discussion of how media portrays black women versus white women, which was something that Minaj called out herself.

Though the artists' Twitter convo brings some seriously complex issues to the forefront of social media — a conversation that should, in all seriousness, not be taken lightly — if I had to pick one thing that sums up the Nicki Minaj/Taylor Swift issue, it would be this comic:

After a series of Nicki Minaj tweets about the VMAs (see below), Swift immediately got on the defensive and questioned why Minaj was coming after her when Swift has "done nothing but love & support" her. She also brought up the topic of feminism and essentially called out Minaj for "pitting women against each other," then attempted to diffuse the situation in a tweet that just sounded straight up condescending when she said Minaj could join her on stage.

Many feel that Swift unnecessarily inserted herself into Nicki Minaj's discussion about race (and particularly, race in mainstream media) and then tried to turn the tables on the rapper by questioning her dedication to feminism. And as the above comic points out, it's important that we, as a society, discuss all facets of feminism, including what feminism looks like for people of color. Even Nicki Minaj was confused about T. Swift's reaction to her tweets, suggesting that the singer join the discussion about racial issues herself:

That being said, it's not hard to see why Swift thought that Minaj was calling her out, considering she is pretty much the only nominee in the VOTY category with "slim women" in her music video. Not knowing the tweets were about race (a fair enough assumption, as Nicki Minaj did not blatantly use racial terms in her tweets until later on), it makes sense that Swift might see this as a personal dig. (Many T. Swift supporters have also pointed to the fact that Beyonce's "7/11" video was also nominated in the category). But once Nicki Minaj's intentions were clear (and, to be fair, some may argue that they were obvious from the very beginning — basically using words like "other" and "kind" as synonyms for "white"), T. Swift should've probably picked up on things.

Nicki Minaj brings up some valid arguments; it's up to the world to see their value.