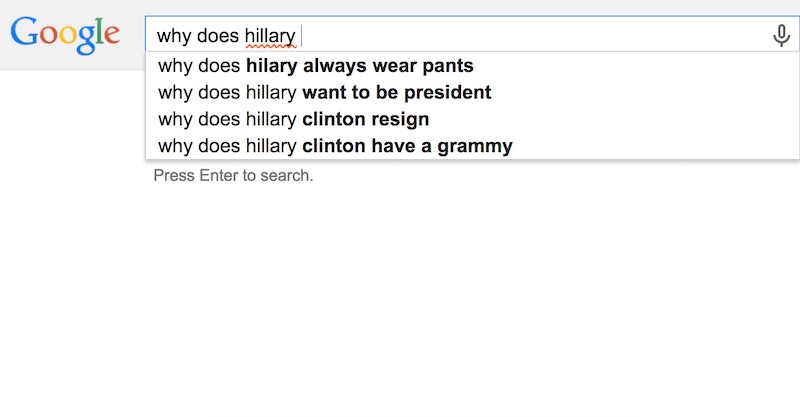 If there's one candidate we already know pretty well, it's Hillary Clinton. Between her tenures as first lady, New York senator, and secretary of state, the American public has a longer track record with her than it does with virtually any of the other presidential challengers, Democrat and Republican alike. But beyond what we know of her, what do we wonder about? There's one pretty decent way to find out: Google autofills related to Hillary Clinton reveal the Internet's questions about her, and some of them are a bit strange.

You probably know about autofills, because most people have stumbled across a bizarre or funny example now and then. It's when you're typing something into Google and the search engine predictively offers suggestions as to what terms you're planning to use. Start by typing the words "is Barack," for example, and you could get an autofill suggestion for "is Barack Obama dead?" (No, he's not.)

Autofill results can go in a lot of different directions, and sometimes you run the risk of a vulgar result, as I'm sure you can imagine. But they also provide an undeniably interesting glimpse into what search terms people are plugging in, some of which can be delightfully unexpected. So why not take a look?

Here are the answers, in case you're one of the people Googling these things.

That last one is obviously the most specific, and most curious. The confusion is likely thanks to left-wing criticism of Clinton's proximity to the agro-chemical giant, which has picked up steam recently. One of her top campaign advisers, Jerry Crawford, has been a Monsanto lobbyist, and Clinton has publicly endorsed GMOs in the past. She's not a Monsanto board member, however.

This gives you a pretty good idea of how wide-ranging people's suspicions about Clinton's politics go. Is she a socialist? A communist? A hawk? For what it's worth, if you want to vote for a socialist, you'd probably be better off with Bernie Sanders, who's actually embraced the label throughout his political career.

Should Hillary go to jail? Presumably that's a popular search with the Benghazi crowd, and one that's going nowhere fast. And while it's kind of easy to understand what the top result is getting at — should Clinton publicly acknowledge the Bernie Sanders candidacy, perhaps? — it comes off as rather strange.

Should Hillary Bernie? If that means "should she do the Weekend At Bernie's dance," I guess the answer would be ... maybe?

Even though it might rankle grassroots Democrats eager for a competitive primary, there's a pretty good reason Clinton hasn't been too vocal with the press so far — she's out in front by a lot. As such, it's to her benefit to offer as little in the way of concrete proposals as she can until she gets the nomination. That way, if she has to moderate her views for a general election audience, she won't be as easily slammed as a flip-flopper as, say, Mitt Romney was in 2012.

And as for why she won't "just go away," the best reply I've got is "too bad, so sad." I'm sure plenty of Republicans would love for her to vanish from the political scene, leaving them to contend with the likes of Sanders, O'Malley, Webb, and Chafee, but that ain't happening.