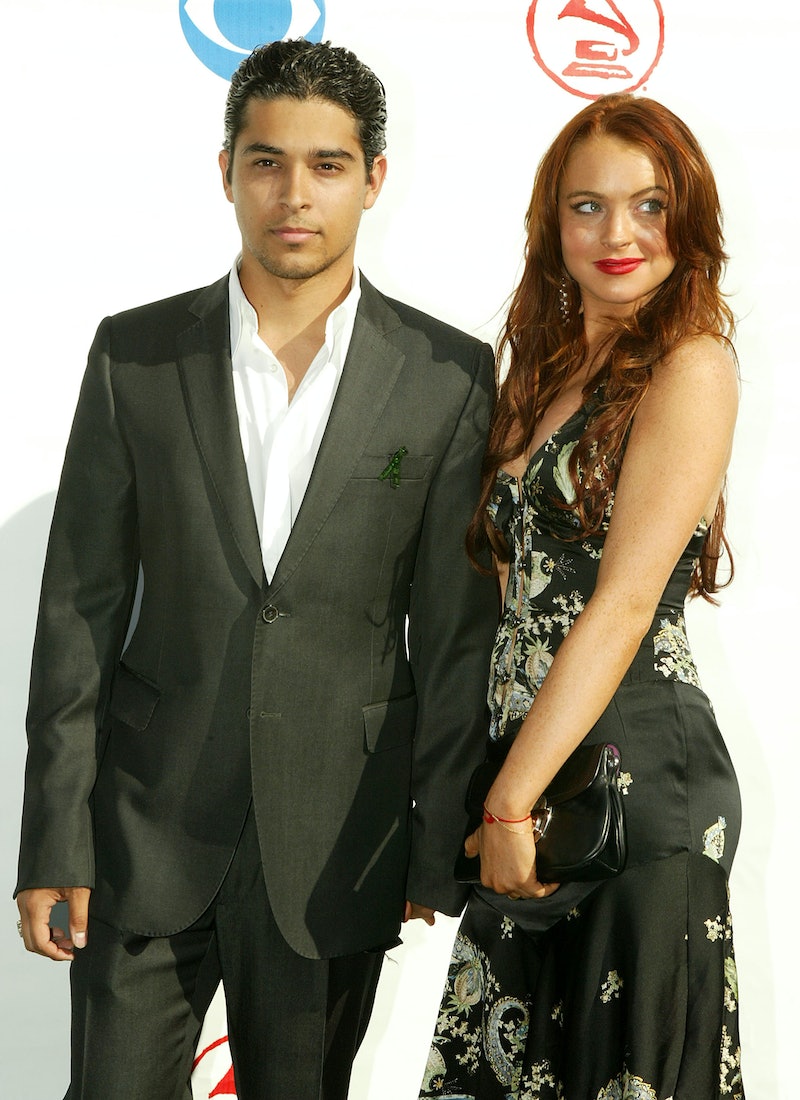 fI'm about to take you way, way back to 2004; a year that gave us the Friends finale and Maroon 5's sexy "This Love" video. It was also the year Lindsay Lohan and Wilmer Valderrama broke up, making headlines everywhere, barely a year after they started dating. (Or at least, after they publicly started dating. If you recall, they came out as a couple when she turned 18, though their relationship allegedly began when she was 17 and he was 24.) Now that an older and wiser Valderrama is dating Demi Lovato, who reportedly told New Zealand radio station ZM that she would marry the actor tomorrow if he proposed, it's only natural that the mind starts to wander back to the star's past relationships. Especially his most famous one.

During her relationship with Valderrama, Lohan was just beginning to show signs that she was in need of a break and, possibly, professional help to deal with reported emotional and physical issues. In October, Lohan was hospitalized for exhaustion and a high fever, according to her reps. Valderrama reportedly stuck by her side through the whole ordeal, and even helped her nab a guest spot on That '70s Show (though she later had to be replaced by another actress, because she had not yet recovered).

Their relationship ultimately fell apart soon after, though both of their reps claimed they were committed to remaining friends. At the time, Lohan's publicist, Sloane Zelnick, tried to shift attention to the star's upcoming projects, which included an album called Speak to be released later that year. And while it would have been easy to think the couple's split was due to hectic schedules, once Speak was released, there was one song on the track that totally blew that assumption out of the water.

Last year, during an appearance on The Ellen DeGeneres Show, Lohan confessed what many had speculated: the song "Over" was about Valderrama. Her confession on Ellen actually came six years after she originally sang the song on the show, with Lohan adding that she wrote it the day after their split — and while they were still living together. The actress even admitted she would walk around the house singing it very loudly while he was there.

In case you can't quite remember, here are a few sample lyrics from "Over" that will break your heart:

Don't wanna be the last to know/ I won't be the one to chase you/ But at the same time you're the heart that I call home/ I'm always stuck with these emotions/ And the more I try to feel the less I'm whole.

Now, I know artists often use their experiences to create characters and emotional scenarios that don't always reflect reality, but come on. Lohan isn't exactly Bob Dylan — the girl was clearly crushed by her breakup.

It didn't help matters that Valderrama appeared as a guest on The Howard Stern Show in 2006 and claimed he slept with a number of young celebrity women — from Mandy Moore to Jennifer Love Hewitt — while also divulging embarrassing details about Lohan, including how she likes to shave down there. He now claims he regrets the interview, by the way, which is a relief because no one wants to imagine him telling the world all about Lovato one day, if the two ever call it quits.

During the Stern interview, Valderrama also claimed that he didn't break up with Lohan so that he could date Ashlee Simpson, which was rumored at the time. But assuming what he said was true, it does still leave you wondering just what, exactly, was the reason for their sudden split. Did he realize their age difference was too much? (Eh, I doubt it given the fact that he continued to date younger women in later years.) Or was she too dramatic? Maybe she simply wasn't in a good place to continue dating and needed to take time off to work on herself?

Whatever the real reason, it's nice to know Lohan is probably over it by now. After all, it's been 11 years, and if she feels comfortable enough opening up about that emotional song on Ellen, well... I'm guessing it really is all behind her. As for Valderrama, it sounds like he's learned a thing or two from his many past relationships, and giving Lovato a solid, quality partner — which is exactly what she deserves.

More like this
Demi Lovato's New Song "29" Hints At Their Age Gap From Ex-Boyfriend Wilmer Valderrama
By Jake Viswanath
Leona Lewis & Husband Dennis Jauch Welcomed Their First Child
By Darshita Goyal
Who Is Camila Cabello Dating? She's Getting Cozy With Lox Club CEO Austin Kevitch
By Radhika Menon
Who Is Bad Bunny Dating? Gabriela Berlingeri's Vocals Are Featured On His Song "En Casita"
By Radhika Menon
Get Even More From Bustle — Sign Up For The Newsletter