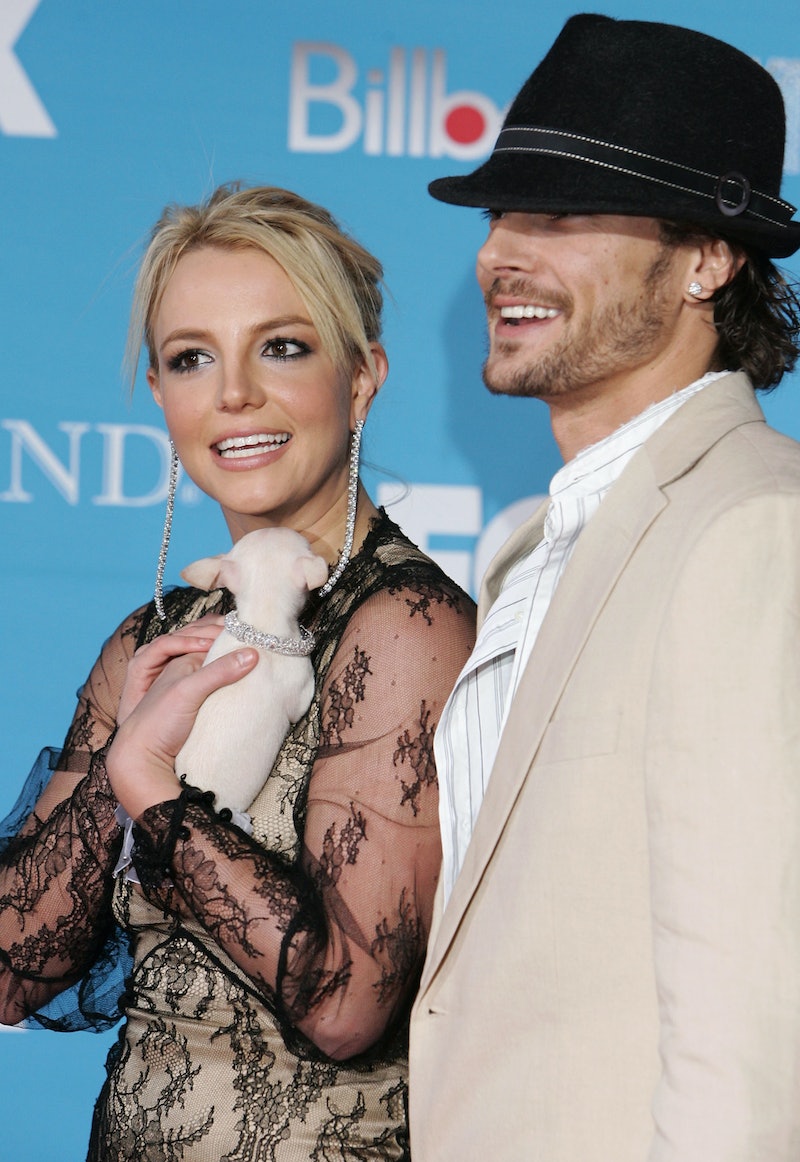 Remember when Britney Spears and Kevin Federline got married? It sure seems like it was forever ago — and in a lot of ways, 2004 really does feel like forever ago. It was a crazy whirlwind time, no doubt about it. And no one is as forthcoming about that as Kevin Federline himself, who recently reflected on his ex, telling Us Weekly, "It was fun. It was crazy." Some Brit fans feeling nostalgic about the good old days might be wondering why Britney Spears and Kevin Federline broke up way back when. Let's take a look into the past and figure out just that.

When news first broke about the pair's split after two years of marriage, many publications cited Federline's hard partying habits as one of the causes for the split. Spears was the one who ended up filing the divorce papers, so it is not surprising that people pointed fingers at her ex for the failed marriage. One source told People that Federline left Spears home alone not long after she had given birth to the couple's second child just for the sake of going a party at a nightclub in Vegas. Considering Spears was originally seeking custody of the kids, others blamed Federline for being a bad father.

Federline, for his part, would later tell reporters that he was totally "blindsided" by the way it ended. Reportedly, the pop star announced her divorce plans via text message to him the night before. Yikes! And, of course, just because the divorce was finalized, that did not mean that the drama was all over between them. It was only beginning.

The divorce was just one of many dramatic events leading up to Spears having her infamous meltdown in 2007, which included shaving her own head and attacking a paparazzo's car with an umbrella, among other things. Unfortunately, the ex pair's two young children were caught in the middle of Spears' upsetting behavior and bizarre antics. This led Federline to sue for primary physical custody of the children, an action that came just a couple weeks after their divorce had officially been finalized. The two were engaged in a custody dispute until a judge ordered Spears to surrender custody to Federline in October 2007. An agreement was not reached between the two until the summer of 2008.

It was definitely a messy situation following the divorce, so it is really extraordinary to see how the two have grown since that time. Spears' comeback as a chart-topping, clothing-designing, and well-respected pop phenomenon is really one for the books. As for Federline, he's found love once more with current wife Victoria Prince.

Miraculously, the ex couple appears to be on relatively good terms these days. They have been spotted spending time together at their sons' soccer games. Federline even spoke highly about Spears in his recent interview with Us Weekly, saying, “Things that [Britney] brought out in me were, a better sense on having a great relationship with somebody, I really learned a lot about what I like in a person from her, a lot." It took a lot of time, but it is encouraging to see that even the most harrowing situations between exes can mend with time, if both put in the effort necessary to do so. Kudos to them!