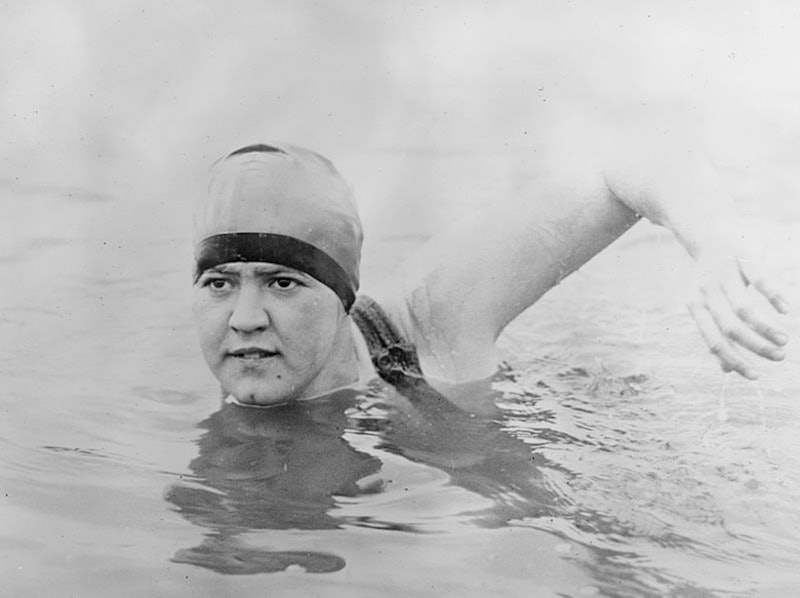 Female sports in America seem, superficially, to be on the ascendant. The U.S. women's soccer team kicked butt incredibly memorably this year, Mo'ne Davis nabbed the Sports Illustrated cover as a Little Leaguer, and Serena Williams appears basically unstoppable — and the number of girls playing high school sports is now two in five, a total of 3.27 million. But the continuing fights over unequal pay, insufficient media coverage, and general aggravating sexism are still around. The unconscious (or conscious) attitude that women's sports are less exciting, less athletic, and plain less impressive than men's because of a biological disadvantage is more widespread than you'd think. "Throw like a girl" remains an insult. Which is why looking at the women who broke ground for American sports is so important.

The Olympics, arguably sport's highest pinnacle, has technically allowed women to compete since 1900, but it's taken an incredibly long time for women to truly infiltrate the top professional levels of sport. For all the Instagram and Pinterest images of inspiring muscle-bound women, the idea of an athletic woman is a very modern one, barely 70 or 80 years old.

If you want to truly understand how far we've come, and how far we have left to go, you've got to put it in perspective. Here are six women who started the female American sports tradition — in blistering fashion.

It's no exaggeration to say that Babe Didrikson was one of the greatest all-rounders in the history of sports — and in an era when women weren't encouraged even to be amateur sportswomen, let alone go around dominating the entire field. You name it, Didrikson was a record-breaking champion in it.

Golf? She won a Grand Slam in 1950, every major tournament at least once, and was the highest-earning player on the American circuit for two years running. Athletics? She once set four world records — in the javelin, 80 meter hurdles, high jump, and baseball throw — in one afternoon. (Oh, and she also won two Olympic gold medals, plus one silver because her high jumping technique was deemed too weird to win.) Bowling? She was a champion in that, too.

Didrikson combatted some extraordinary sexism in her time: a sports writer once wrote that "It would be much better if she and her ilk stayed at home, got themselves prettied up and waited for the phone to ring." But American sports would have been much poorer for it.

Gibson is legendary for a number of reasons — one of which is that she was probably the most superb American female tennis player the world had seen until the Williams sisters came along. She was the first woman of color to win a Grand Slam (the French Open in 1956) — in both singles and doubles. She went on to win Wimbledon and the U.S. Nationals, and won 11 Grand Slam tournaments in total.

She broke huge barriers for both women and people of color in tennis, and then went quietly professional in the golf world after she retired from tennis. Despite having to change in the car for tournaments because golf clubhouses were often segregated, Gibson became one of American golf's top 50 earners.

Peck may not have been a sportswoman in the traditional medal-winning sense, but she was certainly an incredible physical adventurer — and had the mountain climbing expertise to prove it. Peck was one of the world's first professional mountaineers, starting her search for high peaks in the 1880s (where, to give you context, bustles were still in fashion for European women). Peck, who'd also fought her way to a college degree and spoke four languages, didn't care. She climbed the Matterhorn, and in 1908 was the first person in the world — male or — to scale the colossal 6768m Peruvian mountain Nevado Huascaran.

The 1948 Olympic Games were special for one radical reason: Alice Coachman became the first African-American woman in history to win an Olympic gold medal. Coachman, who'd grown up and trained in segregated sports teams in the American South, was a high jump specialist, but she was also national champion of the 50m, 100m, and 400m relay as a teenager. This was a woman with a mission.

She would have probably dominated the field earlier if the 1940 and 1944 Olympics hadn't been cancelled by the war. When her time came, she jumped a blistering 5 feet, 6 1/8 inches to nab the gold and set a new Olympic record. And she set another precedent: in 1952 she became the first female athlete of color to get an international endorsement deal, with Coca-Cola.

Virne Jackie Mitchell was the pitcher you couldn't trick, and one of the first female professional baseball players in the world to boot. She even struck out both Babe Ruth and Lou Gehrig at the age of 17, while playing an exhibition game between the New York Yankees and the Chattanooga Lookouts in 1931.

Ruth did not take the strike-outs well. "I don't know what's going to happen if they begin to let women in baseball," he told the press afterwards. "Of course, they will never make good. Why? Because they are too delicate. It would kill them to play ball every day." Unfortunately, Virne's later career — she and all other female baseball players were banned, and she toured as something of a carnival act rather than a genuine athlete — embittered her, and she wouldn't rejoin baseball even when a women's league was formed in 1943.

Gertrude Ederle struck a true blow for the British sense of superiority when she, an American champion swimmer, became the first woman to swim across the English Channel in 1926. Prior to this, however, she was hardly a shrinking violet. She set her first world record in 1917 at the ridiculous age of 12, and totted up 29 U.S. and world records, one gold and one bronze Olympic medal, and became the sixth person in history to swim the Channel successfully.

Her Channel swim (which she completed while covered in lanolin to protect her from jellyfish stings) not only set a new world record — 14 hours and 43 minutes, which wouldn't be bested for 26 years — but also made her a superstar, with a ticker-tape parade through the streets of New York and a minor riot at City Hall.