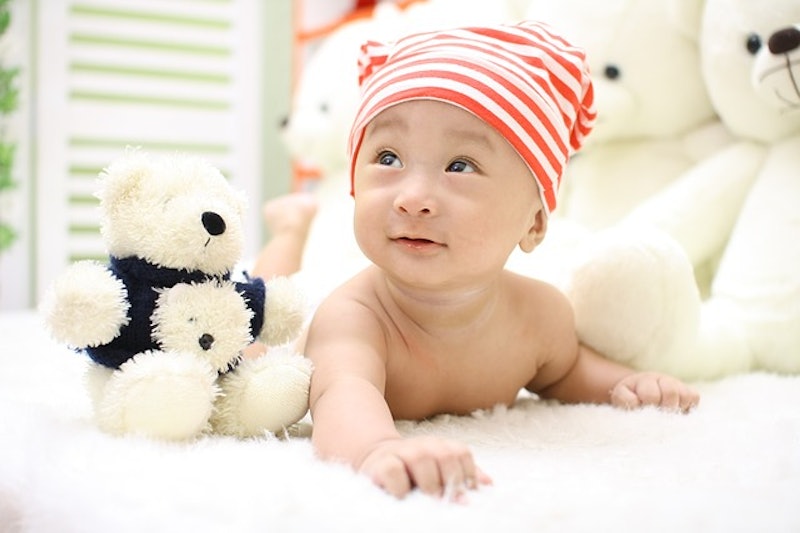 Shakespeare cracks aside, names are pretty damn fascinating. It's a hugely powerful decision parents get to make: picking out the exact noises people will associate with your face until you die. (And even after! Names live on.) Those noises can also carry a fair amount of significance. What about those most popular in our generation? Let's explore the true meanings behind the top 20 baby girl and boy names of the '90s.

My parents deliberately gave me and my sister (Katherine) pretty boring names. It was fueled by kindness, seriously though. My maternal grandmother was rather inventive and literally made up my mother's name "Luada" by mooshing together the names of important people in her life, Luella and Ada. During the '90s hay day of solicitation phone calls, it was very easy to identify a salesperson hollering. They'd ask for Linda or "Luda" (I wish) or "Londa." The enunciation isn't super obvious and it's a thing Mom continues to struggle with. It also mostly lends to her decision to simply by "Lu."

Anyway, we kinda get what we get, right? I know there's 100 Becas, Beccas, Bekahs, Bekas, etc., but it's all good. We're all still snowflakes regardless, yeah? Yeah. Let's scope out the actual meaning behind some other popular '90s baby names:

Christopher: to bear, to carry; in the Christian sense (spoiler: many of the popular '90s names have heavy Biblical roots) it means literally to carry Christ.

Joshua: God is salvation. (See? Lots of religious undertones taking over the name game of the '90s.)

Jacob: "holder of the heel". That's it, I'm finding me a good Jacob to force into partnership because clearly he'd know how to give a damn good foot massage.

Andrew: masculine or literally "of a man".

Daniel: "God is my judge"; not sure how that could translate into something secular, but...

Tyler: a person who lays tile on roofs. (Honestly, I feel at this point we're just listing all my ex-boyfriends and this one made me laugh the loudest because mine actually does do weird home improvement projects — roof tiling likely included.)

Brandon: "hill covered with broom". OK...not entirely clear on that, but the Brandon to whom I'm closest does boast quite the burly beard, so maybe that holds up.

Ryan: "little king", and I am dyinggg.

Zachary: "God remembers". (TBH that sounds like a threat.)

Justin: derived from "justice" so these folks get the law, I guess.

Anthony: one of the more gangster names around, apparently, meaning "priceless".

Lauren: a boy name again, this one meaning "fierce," which I fully dig.

Nicole: "people's victory". Maybe she should start a band with Nicholas? Maybe.

Alexis: "defender of man," which sounds hyper-feminist and therefore awesome.

How do people in your life live up to their name? Or do they not? Don't know many roof tilers? There's time to change that.

More like this
14 Scary Campfire Stories To Tell Your Friends
By Charlotte Ahlin and Kaitlyn Wylde
The Spiritual Meaning Of Angel Number 000, Explained
By Kristine Fellizar
10 Ways To Be More Empathetic To Your Partner
By Raven Ishak and Lexi Inks
Think Your Partner Is Cheating? These Tarot Cards May Confirm Your Suspicions
By Kristine Fellizar
Get Even More From Bustle — Sign Up For The Newsletter