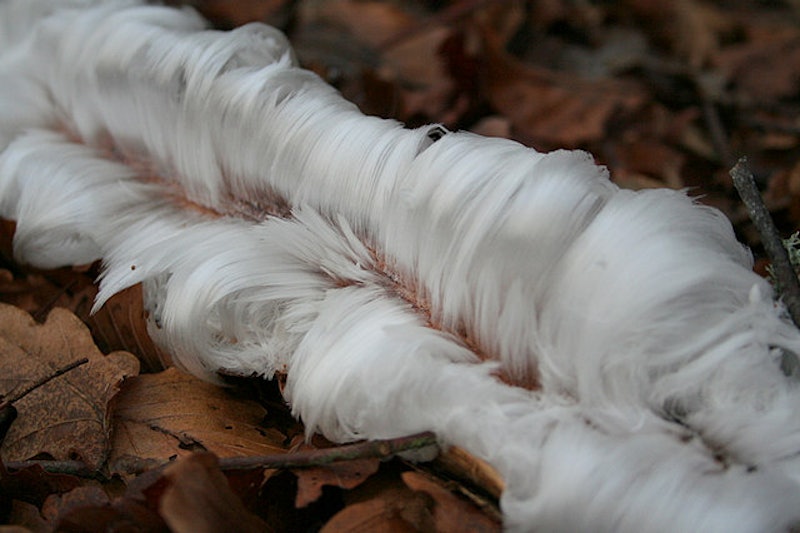 When I first heard the term "hair ice," I thought it was some kind of beauty trend, possibly involving '90s-esque rhinestones that you iron into your hair. I was therefore quite disappointed to find out that it has nothing, in fact, to do with me reclaiming the hair goals of my youth; instead, it has everything to do with a beautiful, fairytale-like, crystalline structure that grows out of tree bark in particular climates during the winter months. But what is hair ice? That's the question that stumped scientists until recently, when they discovered exactly how this natural phenomenon happens.

I won't dance around the subject: These whisper-thin strands of ice are the result of a "rotting fungus" that feeds off of dead wood. This might be the ultimate example of non-conventionally attractive parents somehow producing exceptionally conventionally beautiful offspring, and you're just like, "How?" How did this real-life iteration of something that seems like it came straight out of Frozen only exist because of a rotting fungus?

Like so many unsexy things in life, the answer lies in science. According to Live Science, the root of hair ice is called a "crystallization nucleus" and is probably composed of "lignin" and "tannin," two organic compounds present in living plants and tree bark. Because of the highly unique climates required for hair ice to grow (it only grows in really cold, northern countries between 45 and 55 degrees latitude — think Sweden, Canada, and Russia), once crystallization happens in nuclei form, all it takes is a water droplet to freeze on it and then trickle down in a thin path while freezing in mid-air, resulting in the impossibly thin — like, .0004 inches in diameter — ice strands.

You may just have heard of hair ice (I know I just learned about it this morning), but it's actually a phenomenon that has puzzled scientists for more than a hundred years. This new information about the rotting fungus actually represents a major breakthrough, and comes courtesy of a study conducted by Gisela Preuß, a biologist at the Wiedtal-Gymnasium in Neustadt, Germany. She came up with the theory by examining hair ice from the past three winters under microscopes and discovering more than 11 types of living fungi on the structures.

I'm still not over the fact that these five gorgeous things come from rotting fungus:

So pretty, much fungus.

How close is this dude's camera to rotting fungus right now?

It's weird because it looks so beautiful, but you know it's only growing because the tree is dying. (Did I just ruin everything?)

Straight up this looks like a wig on the ground.

More like this
How To See The Lunar Eclipse On May 15-16, 2022
By Kaitlyn Wylde
Pat McGrath’s New Highlighter Duo Will Give You A Galactic Glow
By Tomi Otekunrin
Iris Law's Skunk Mullet Is Not For The Faint-Hearted
By Tomi Otekunrin
How To Master Baby Braids, According To TikTok
By Tomi Otekunrin
Get Even More From Bustle — Sign Up For The Newsletter