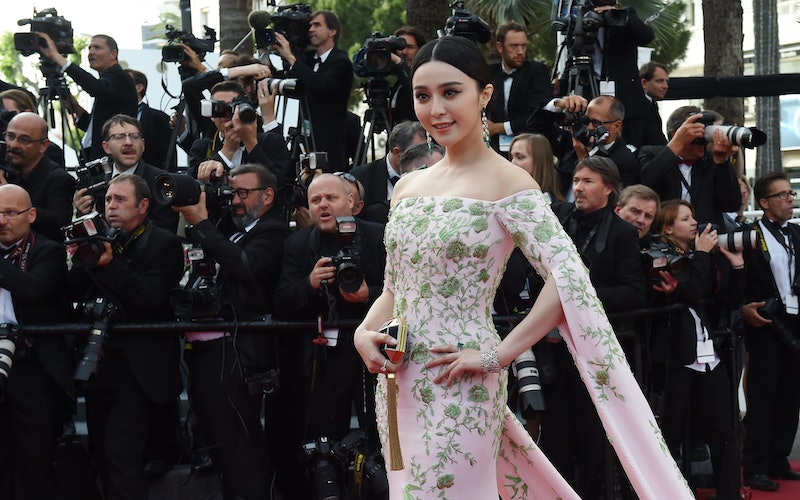 Is there anyone out there as fabulously stylish as Fan Bingbing? She's famous for consistently crushing it at the Cannes Film Festival (especially this year, where she stunned in everything from fairy princess Marchesa to queenly Ralph & Russo), and on top of that, she basically won the Met Gala, in a caped and sequined number by Christopher Bu. Plus, the international star has major range — she can wear everything from crimped hair with head-to-toe Louis Vuitton to soft-focus Valentino with equal aplomb. That said, out of all the myriad showstopping dresses she's pulled off in the past year, she's worn quite a lot of one brand in particular: Ralph & Russo Couture.

As mentioned above, she wore the designer to devastating effect at Cannes this year (giving fellow style genius Aishwarya Rai a serious run for her money), and she's also worn the intricate, classic gowns from the line at countless film premieres, photo calls, and award shows. So, given the sheer number of times she's worked the red carpet in the brand, I thought a quick ranking was in order. Luckily for us, there are categorically no losers on this list, because every single gown she's ever worn ever is basically glamour made corporeal. In other words? It's not worst to best, it's amazing to really, really amazing.

This is what the lovechild of Queen Elsa and the White Witch (as played by Tilda Swinton, of course) would wear out on a date.

8. At the Melbourne Premiere of X-Men: Days of Future Past

You can never go wrong with a white capelet now, can you? (Angelina Jolie agrees).

6. At a Press Conference for Ever Since We Love

Basically all your wildest red carpet dreams condensed into one fabulous gown.

4. At the Chopard Gold Party at Cannes

Giant emeralds and white lace? Sounds like a winning combination to me.

3. At the Opening Ceremony of the 68th Annual Cannes FIlm Festival

2. At the Trophée Chopard at Cannes

Sometimes, Bingbing looks like she belongs in a museum (and I mean that in the best way possible).

1. At the Beijing Premiere of 'The Lady of the Dynasty'

Honestly, it really doesn't get much better than this.

Here's hoping we get a lot more of Fan Bingbing x Ralph & Russo Couture (and Christopher Bu, and Louis Vuitton, and Valentino, of course) in the months to come!

More like this
10 Swoon-Worthy Beauty Looks From The 2022 Cannes Red Carpet
By Olivia Rose Ferreiro
This 'Hunger Games' Alum Will Star In A New Medical Drama Titled 'A Mistake'
By Alyssa Lapid
Machine Gun Kelly Wore A $30K Diamond Mani To The BBMAs
By Paris Giles
How To Master Baby Braids, According To TikTok
By Tomi Otekunrin
Get Even More From Bustle — Sign Up For The Newsletter