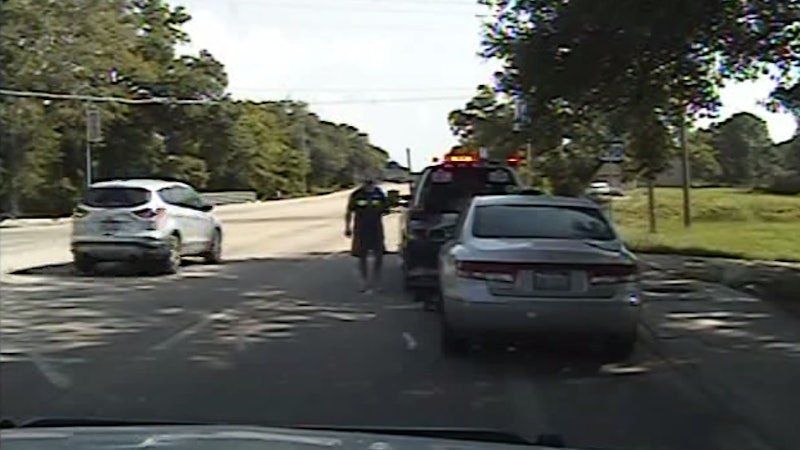 The mysterious death of 28-year-old black woman Sandra Bland in a Texas jail cell has sparked questions about why she was arrested, why the police officer used so much force, and whether her death was a suicide or murder. State trooper Brian Encinia pulled Bland over for changing lanes without a signal. A dashboard video released of the encounter shows Bland refusing to put out her cigarette and get out of her car before Encinia threatens to use his Taser and roughly pulls her out of the car. Did Encinia do anything illegal while arresting Bland?

First of all, Encinia did have the right to pull Bland over for failing to use a turn signal, as that's against Texas traffic law. However, in the video, Bland says that she only changed lanes to get out of the state trooper's way, but it's impossible to know whether that's true at this point. After Bland refused to put out her cigarette because she was in her own car, Encinia asked her to step onto the street, and forcibly removed her when she wouldn't get out. In Encinia's affidavit, he says he asked her to do this so he could "conduct a safe traffic investigation." Because a lawful traffic stop qualifies as a reasonable "search and seizure," police officers can ask drivers to exit their cars for safety reasons, and the Supreme Court has upheld this as legal.

The fact that Encinia forces Bland out of her car implies that the arrest began then, because Bland was not able to leave on her own will. Although it may seem harsh to arrest someone for a small traffic violation, it is legal and has also been upheld by the Supreme Court. By refusing to exit her car, Bland resisted arrest — Texas law states that a person resists arrest when they "intentionally prevent or obstruct" a police officer from making an arrest — which is another crime.

The legal problem with this encounter is that Encinia likely used excessive force when pulling Bland out of her car and arresting her. A few factors go into determining wether or not a police encounter qualifies as excessive force: the severity of the alleged crime, the immediate safety of the officer, and if the suspect resists arrest. Since Bland technically resisted arrest, that could be used to justify Encinia's harsh behavior, but her traffic offense was minor, and she wasn't posing an immediate threat to Encinia's safety. For these reasons, Encinia could have violated the Fourth Amendment.

Encinia was placed on administrative duties following Bland's death. The Department of Public Safety said it found “violations of procedures regarding traffic stops and the department’s courtesy policy," but didn't specify what violations those were. Until the Texas Rangers' and FBI's investigations conclude, it's unclear whether or not charges will be brought against Encinia, or what exactly happened to Bland while she was in jail.