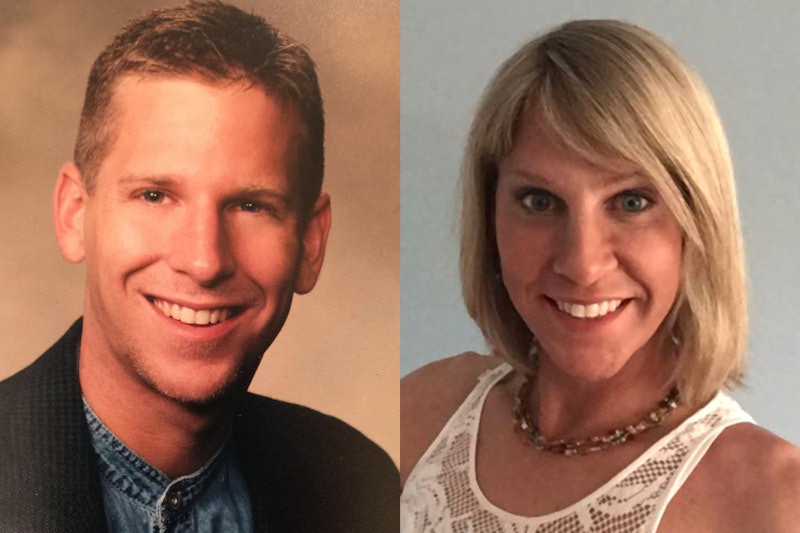 When Caitlyn Jenner came out as transgender in Vanity Fair last June, plenty of attention was paid to the way her body had transformed. But the most striking change, to most eyes? Her face. While the resemblance to the person formerly known as Bruce was clear, Caitlyn's face now possessed more typically feminine features. Caitlyn underwent numerous surgeries to achieve her new look, a process that's known in the plastic surgery biz as facial feminization surgery (FFS).

There are only a small number of surgeons who specialize in FFS, which is a set of surgeries generally comprised of a brow lift, rhinoplasty, cheek implantation, lip augmentation, and tracheal shaving. One of them is Dr. Jeffrey Spiegel, a plastic surgeon in Boston who actually stumbled upon the market for facial feminization mostly by accident,18 years ago.

"I was in practice doing more usual plastic surgery: reconstructions after injuries, facelifts, nose jobs, sort of the things you normally think of. And a transgender woman came into see me, and said that she didn't look very feminine and she wanted to fix that, what could I do?" Dr. Spiegel tells Bustle. "And I said 'Gosh, I don't really know, let me check the medical literature and we will meet again.'"

To his own surprise, Dr. Spiegel says he found next-to-no standard procedure in his field for facial feminization — and so he decided to create one. The key, he found out, comes down to the very shape of our skull. He calls it "forehead conturing," and the details are probably not for the squeamish.

Spiegel says that while there's no exact formula for how we assess someone's gender, the research he's done suggests that the forehead and eyebrow shape are the clearest traditionally masculine indicators. On someone who is biologically a man, Spiegel explains, typically "there is this ridge over the eyes, and the eye sockets sort of slip down and are smaller ... so I actually adjust that, and go into the head, remove the whole ridge of bone, and reconstruct it so it is now a woman’s head."

Dr. Spiegel might also adjust the position of the lips and the nose in order to make the patient look more traditionally "feminine," he explains. "It's not lost that for the people who are transitioning, this is almost a moment of rebirth. That they have been waiting almost their whole lives to look the 'right' way," Dr. Spiegel says.

One of those patients was Erica, a woman who was tired of looking masculine. "Hormones can only do so much," Erica tells Bustle. "Bone structure from testosterone over the years creates broader shoulders, bigger appendages, limbs, your hands are bigger, your feet are bigger ... [by having the surgery] you're removing one of those attributes that scream 'this was once a man,' in my opinion."

Erica was the victim of a hate crime in her late teens, and that motivated her desire to seek a more traditionally feminine appearance.

"I was with some friends walking around lower Manhattan when three men began calling us 'f*cking faggots' from across the street," Erica told Bustle in an email. "They followed us and escalated the name calling; chasing us down a side street. We all ran, I just wasn't as fast (my heels were too strappy and I couldn't get them off in time to run). They beat me up pretty badly, tore off my wig, took my purse and ripped my dress almost in half. I covered my face the best I could [but I still got] two black eyes which eventually became swollen shut, and was kicked in my abdomen and ribs repeatedly."

Erica was taken to the hospital but eventually ran from it out of fear that her family would find out she'd been dressing in women's clothes. She went back to "hiding," as she puts it, living her public life as a man. Though she made the decision to take hormones and transition later in life, it wasn't until she was 39 that she decided to get facial feminization surgery.

In the end, her procedures with Dr. Spiegel included the forehead contouring, along with a brow lift, rhinoplasty, cheek augmentation, a lip lift, mandible contouring, and a trachea shave. She says she couldn't be happier with the results.

Stacy, who also had her FFS done by Dr. Spiegel, has a similar story to Erica's. She explains to Bustle that though she has sensed she was trans since she was four years old (when she felt she wanted to look like Annie after she saw the movie), it wasn't until puberty that she felt her face truly betrayed her. She felt like her three sisters on the inside; on the outside, she didn't look anything like them.

"I had a difficult time going through puberty, seeing my face become masculine, and sort of forced to take that role as a man, and do man things. I came from a very conservative family and I didn't feel that it was something I could ever bring up to my family. So essentially, I went through until I was about 40, when I finally said this is something that I have to do."

At 42, Stacy started looking at photos of other transgender women who had had the surgery online, and went to Dr. Spiegel, who explained the procedures to her. Though her insurance didn't cover any of the procedures (most only cover bottom surgery and hormones, if that) she decided to go for it. "I just felt that this was the person that could make me look like my sisters." She decided to get "the works" as she calls it — and the price tag was hefty — $50,000. (Though she estimates that for some patients, FFS can also be anywhere between $100,000 and $125,000 including time off and travel costs.) Stacy maintains that it was totally worth it: she finally feels like she can look in the mirror and see a woman who looks like her sisters.

For others, like 29-year-old Parker Molloy, the cost of FFS has been more prohibitive. At age 28, Molloy had her chin and jaw reshaped, her brow ridge worn down, and "a small handful of other procedures" done.

"I think people think about this in terms of 'Oh, you're getting a new face!' or they picture the movie Face/Off or something. It's ... not like that."

"The cost was pretty intense, but I'd rather not discuss it. But it has been a pretty big struggle, but I remind myself that it's because I am in a comparatively privileged position that I'm even able to put myself in debt and get a loan," Molloy tells Bustle. "I was able to raise some money online to put down the deposit, but the rest was the result of me cashing in on old retirement plans from past jobs (so long, 401k...) and taking out thousands of dollars in loans. In the end, though, it's worth it to feel more comfortable with myself."

"As you can see [from my before and after photos], there's not a huge difference, and that's the point. I think people think about this in terms of 'Oh, you're getting a new face!' or they picture the movie Face/Off or something. It's... not like that."

Molloy, who is also a journalist, believes that insurance companies should consider covering FFS. "I tend to think of these procedures more as reconstructive than cosmetic. After all, the goal is to undo some of the effects of testosterone. Obviously, the ideal situation is to go on puberty blockers when you're a teen and begin hormone replacement therapy after that, but for many people — whether it's that they came to terms with who they are after puberty, came from an un-accepting family, or simply didn't have access to puberty-delaying hormones — that's not really an option."

Molloy also cautions that cis people shouldn't assume that someone's transition isn't complete until they have FFS or gender reassignment surgery. "I think sometimes (constantly) society has this tendency to gauge trans people by the number of medical procedures they've had done, whether they've been on hormones, etc. This isn't OK. Whether someone has been on hormones for a decade, had a number of surgical procedures done, or whatever has no bearing on whether their identity and existence is any less valid," she says. She adds that people should never assume it's OK to ask someone about whether they've had surgery, or that they've had plastic surgery because they don't love themselves. "That couldn't be further from the truth. I did this because I love myself, not the other way around," she says.

Meanwhile, while he's excited about the visibility to facial feminization surgery Caitlyn Jenner's very public transformation has brought, Dr. Spiegel says business hasn't increased — at least among trans women. "The transgender women already knew about me and my work, so Caitlyn didn't change that," Dr. Spiegel says. What it did do, surprisingly, is raise awareness about facial feminization surgery demand among cis women. "A lot of people calling are not transgender, saying, 'Boy, if you can make someone who looks like a man look like a beautiful woman imagine what you can do to me.'" Not exactly the most mindful way of putting it, but it's a surprising affect, to be sure.

Erica says that while Caitlyn Jenner might not lead to a spike in surgeries, she has made it easier for other women to come out. "She brought to light a topic has been part of comic relief in news for a very long time, the butt end of a joke. I mean, a decade ago, when I was looking at coming out, [the treatment for trans people who are suicidal] was you wake up in a hospital getting your stomach pumped, they treat you for depression, and they don't treat you for what is really wrong. And now, they don't do that."

However incremental, it's certainly progress. And the results are beautiful.

More like this
Lydia Leonard Is Setting The Record Straight
By Olivia-Anne Cleary
10 Times Boris Johnson Got It Wrong On Trans Rights
By El Hunt and Sam Ramsden
The UK's First LGBTQ+ Museum Is Finally Opening
By Sam Ramsden
Bustle Newsletter: May 6, 2022
By Stephanie Talmadge
Get Even More From Bustle — Sign Up For The Newsletter