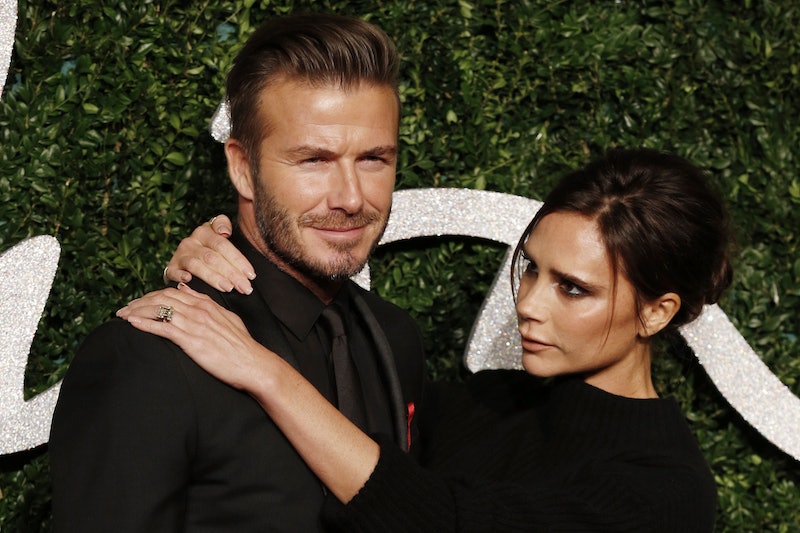 Soccer player, hubby of Posh Spice, and all around hottie David Beckham is pretty much covered head to toe in body art. So when it was announced that David Beckham has added a new tribute tattoo to wife Victoria Beckham, it should come as a surprise to absolutely no one. The former Posh Spice already teased us earlier this month, joking on her Instagram that her youngest daughter Harper had chosen her dad's new ink — a temporary stick-on of a yellow Despicable Me minion. But this time the tattoo is very real, very permanent, and totally romantic.

Beckham just got the number 99 tattooed on his right hand pinky finger, right underneath that tattoo of his wife's name across the back of his hand. The pictures is captioned simply, "99 was a good year for me." Quite the understatement considering 1999 was not only the year that he married Victoria, but also the year she gave birth to their first child, Brooklyn, and he led Manchester United to victory, winning the Premier League, FA Cup, and UEFA Champions League. The sentimental tattoo is just one more in a long line of family-centric body art for Beckham who has his wife and children's names tattooed all over his body.

While the soccer star's collection of emotional ink is pretty impressive, he's not the only celeb using tattoos to commemorate those special people in their life. Here's five celebs who also jumped on the tribute tat bandwagon.

Jolie has her bicep tattooed with the map coordinates that correspond with the birthplaces of her six kids: Maddox (Cambodia), Pax (Vietnam), Zahara (Ethiopia), Shiloh (Namibia), and twins Vivienne and Knox (France). And the seventh set of coordinates stand for the birthplace of her husband, Brad Pitt in Shawnee, Oklahoma.

Johnny Depp's known for his wide array of tattoos, but his best are surely the ones he's dedicated to his children. The actor has the name of his first daughter Lily-Rose scrawled across his chest, and the name of his son, Jack, on his forearm beneath a sparrow and setting sun.

Kelly is all about family with a heart lock and key on her forearm dedicated to her dad Ozzy and the name of her brother Jack scrawled across her other arm.

Rihanna has a number of large, bold tattoos, but this one is her most meaningful. That tattoo of the Egyptian goddess Isis is a tribute to Riri's late grandma who died of cancer in 2012.

Miley Cyrus gets a new tattoo almost every day. Her body is littered with little mementos dedicated to her friends, family, or whatever she finds funny in the moment. Just take a look at her new avocado tat if you need any further proof. But the tattoo she has beneath her left breast that reads "Just Breathe" is particularly significant, a tribute to her friend Vanessa who died of lung disease and her grandfather who died of lung cancer. It is also a constant reminder to always appreciate the little things.