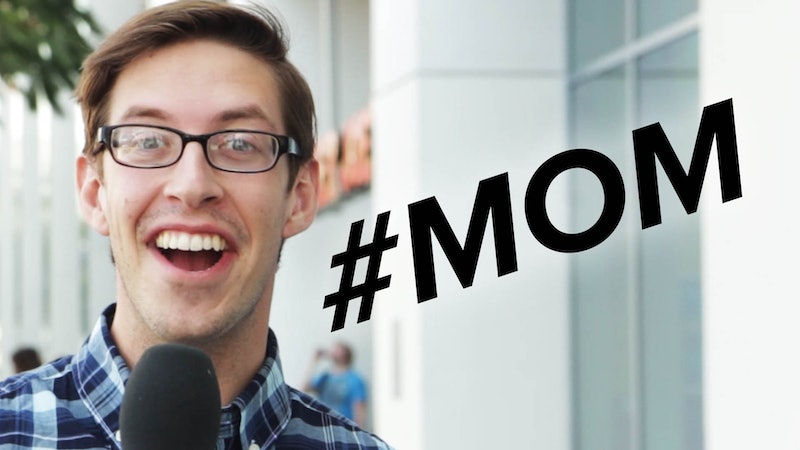 Have you ever had someone refer to you as "mom" or "dad" on social media? This new slang term seems to be gaining a lot of popularity, as BuzzFeed producer Keith Habersberger noticed that many people were referring to him as "dad" in the comments of his Instagram photos. The trend confused Habersberger; he is not, in fact, a dad, and he had no idea why people suspected that he might be based on his photos. Furthermore, it wasn't just happening to him — Habersberger also discovered that fellow BuzzFeed producer Quinta Brunson has been called "mom" by her social media followers. So: What gives?

Habersberger decided to investigate, and as it turns out, it's got something of a surprising origin: Lorde had a huge place in coining the usage of this term, when Kim Kardashian's famous nude photo shoot for Paper Magazine attempted to break the Internet last fall. Lorde apparently responded to it with a tweet using the catchphrase "mom" to refer to Kardashian's likeness. But what did it mean when she did so? When asked to comment on this via Tumblr, the "Royals" singer said that "it basically jokingly means 'adopt me/be my second mom/I think of you as a mother figure/you are so epic.'" Mystery solved!

We all know that slang often takes on different meanings than their original ones, so you can probably imagine what happened when Habersberger took to the streets to see how your average human responded to "mom" and "dad." Let's see if we can come up with a few other possible definitions based on everyday people's perceptions of the term:

This definition is the original intended use for the term as described by Lorde. However, when Habersberger complimented people's jobs, hobbies, and lives by calling the folks who hold them "mom" and "dad," many people were left confused and without context.

2. It's a Bid for Attention

Many of the compliments and comments using "mom" and "dad" are in response to posts made by people with large social media followings. Is it possibly an attempt to get those Instagram- and Twitter-popular people's attention? Maybe. When revealed this as being his reason for using the term on the streets, people seemed to warm up to him and understand the meaning, although they didn't want to use it themselves.

Habersberger asked one man on the street what he would say to future generations who aspire to be "dad," which elicited a natural response from him, "I think you need to inspire the future generations that are coming up underneath you." It resulted in some bonding between the two of them, and honestly? This usage is kind of sweet!

4. A Term of Endearment

Calling someone "dad" as a way to express your love and affection for them or some aspect of their personality might seem like a natural usage for it — but it can result in some awkwardness, too: Those on the streets of LA didn't seem to want to use it this way, but they accepted Habersberger referring to them as such. Lesson learned: It seems to work if you're the recipient, but might be weird to say as the endearment expresser. Quite the conundrum, no?

Generally it seems that "mom" and "dad" haven't caught on enough yet to be used as a compliment without leaving people confused; however, when properly defined and explained in context, it makes others feel comfortable being given the compliment. People using it themselves IRL though seems not to be a thing yet, though, so the safest bet for usage seems to be online as a term of endearment or inspiration.

If you want to see the full range of reactions to people being called "mom" and "dad," watch the complete video below.