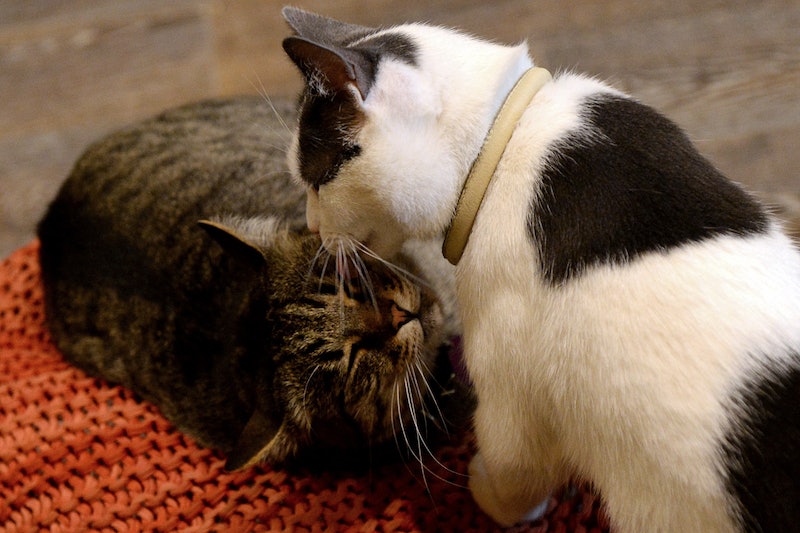 Every cat owner has found themselves wondering the same thing at one point or another: Can cats talk to us? Usually, this takes place either during your childhood or much later, when you're sprawled on the floor after half a bottle of wine, petting said cat and trying to convince your roommate that "Patches is totally trying to tell us something. I don't care if you believe me, man, I know my cat and she is communicating."

According to NY Mag's video series for Science of Us, our tipsy selves could actually be on to something. Episode four, "Your Cat Is Talking To You," explains why you feel like you have not-so-one-sided conversations with your cat. Although they don't have vocal cords capable of uttering actual words, they have plenty of other ways of communication. You've probably heard that when cats leave dead mice on your doorstep, it's because they think you're a weak, puny human who can't feed itself. You might be horrified to see a bloody carcass that could have been Mickey Mouse on your back porch, but your cat is just trying to bring you dinner because you're too dumb to hunt.

Even more mundane actions, however, can have very specific meanings. Let's take a look:

You might think that purring means they're happy, and it does. On the other hand, cats also purr when they're sick or injured.

2. Rubbing Against Your Legs

When cats rub against your legs once you get home, it doesn't just mean they want attention. In the wild, cats rub each other after a hunt. When your cat plasters itself against your legs after you've been gone, the video describes it as "like Vikings giving warrior hugs."

Translation: "We are reunited, old friend!"

According to the video, cats don't typically communicate with each other through meowing. In fact, researchers believe that they actually developed meowing as a way to talk to humans — specifically, with their owners. A study has shown that cats develop a special form of communication with their owners that other people literally can't understand.

Translation: It could be anything, but your cat is probably asking for food. They always are.