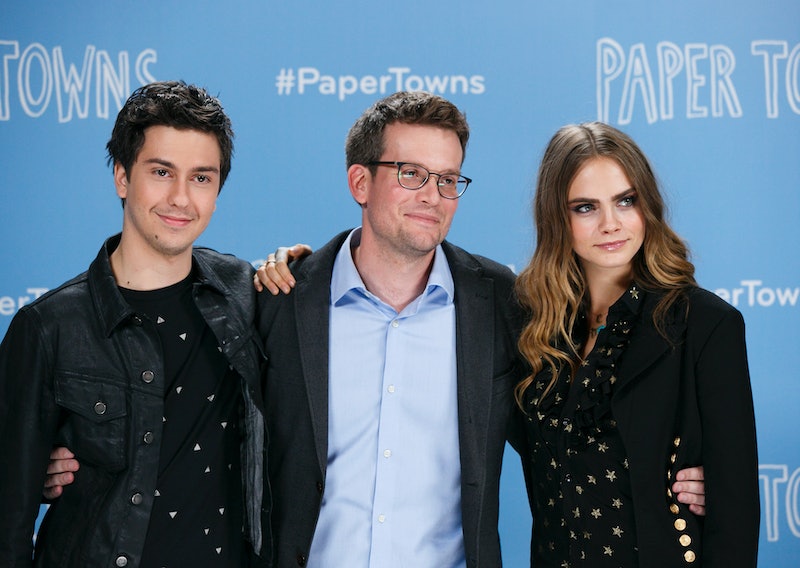 After The Fault in Our Stars and now Paper Towns , author John Green might be seasoned at hanging out on film sets, but that doesn't make him a filmmaker. He's still learning the ropes — and the rules — of adapting his best-selling novels for the big screen. While watching a crucial scene he wrote on paper being transformed for film, Green was so giddy with excitement he laughed through the scene. (Mild spoilers ahead). When Radar (played by Justice Smith) and Angela (Jaz Sinclair) lose their virginity together, the dialogue that precedes it was too much for the author to take. “They can do amazing things with audio these days, which is good because John Green laughed all over the end of the take,” director Jake Schreier says of the scene. “I was so excited!” Green adds.

"Justice put that line back in, about, ‘I always think about imagining Santa complexly when I’m eating my Lucky Charms with my Black Santa spoon.’ And I know I wrote that line, but I also find it very funny," the 37-year-old author says. "I found it really funny when Justice was saying it, so I laughed. I was laughing the whole time they were making out and like, jumping up and down and yelping, but I thought I was far enough away that my joy would not be audible. But it turns out that yeah, they had to like, fix the audio. They had to take out my joy.”

Luckily the scene was usable, and director Schreier says it was one of his favorite shots in the film. "They nailed it. All in one take – there are no cuts in it," he says. "We were lucky, actually, because we didn’t know that Jaz and Justice actually knew each other before they filmed this, so there was a lot of built-in chemistry before we did it. We’d been waiting to film that scene the whole time."

See the scene in question when Paper Towns hits theaters July 24. Watch the trailer below: