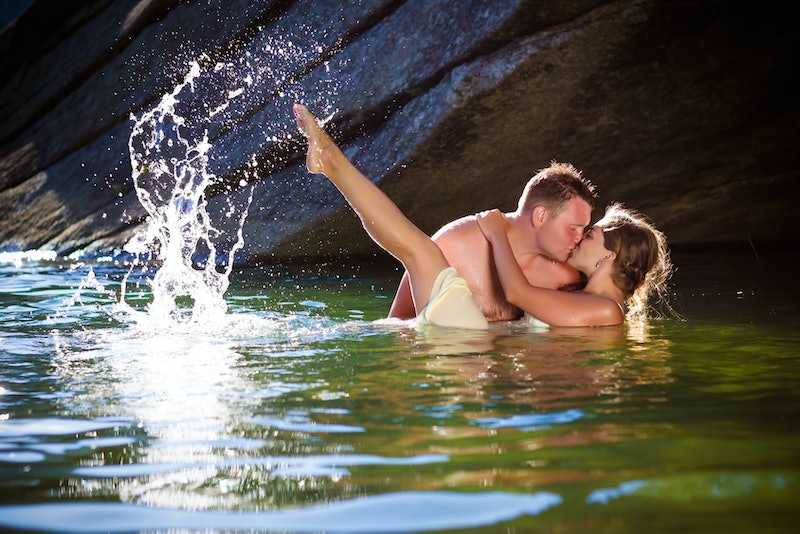 In a recent study conducted by dating site, EliteSingles, 25,000 Australians were asked to rate their libidos by responding to the statement: “I have a strong desire for sex.” It was found that the top two places for high libido respondents were in Sydney beachside suburbs, Coogee and Manly. Other beachside suburbs like Bondi, Cronulla, Broadbeach, and Darlinghurst also made the top 10 list. The lowest libidos in the country came from regional cities such as Shepparton in Victoria and Caboolture in Queensland.

Just to give you a better picture of the Australian study, here’s a map revealing the highest and the lowest libidos in the country:

Because it’s summer, and the sun is out, more people are headed out to the beach. If the above study means anything, they're probably out there having sex. Here are six reasons why we seem to get hornier when the weather gets hotter. (And before you read on, be sure to check out Bustle’s new podcast, I Want It That Way, which delves into the dirtiest parts of dating, and find more on our Soundcloud page.)

1. We Have Nothing Better To Do

OK, that might not really be the case, but time does have an effect. As in, during the summertime, people are more likely to leave work behind and take vacations, and thus, have more time to do other fun things like have sex. As a 2012 Google study published in the Archives of Sexual Behavior found, Americans are most likely to search for sex during the winter and early summer, leading researchers to believe that sexual activity spikes during those months. Additionally, there were spikes in reported condom usage, STDs, and pregnancies.

Associate professor of psychology at Villanova University in Pennsylvania, Patrick Markey, who took part in the 2012 Google study concluded that sexual activity may peak during the summertime because people are just around a lot more people. Because of that, the potential for sex that is usually limited to the office, the gym, and whatever grocery store you shop at, becomes much larger. Now you have the beach or club or the interesting tourist destination to scope out potential sex mates.

So we know a couple of external factors about why we’re hornier in the summer, but what about all the internal stuff? Well, according to Dr. Mehmet Oz, there is in fact a biological reason why people are hornier during the summer. Apparently, we all have a third eye called the “pineal gland,” which is located in the middle of our brains that secretes melatonin. If you’re not familiar with melatonin, it’s that thing that helps us sleep. Melatonin actually blocks our sex hormones. During the summer months, sunshine can cause a decrease in melatonin production. Our pineal gland responds to our decrease in melatonin by increasing our sex drive. If you’re not exactly a believer of Dr. Oz, a study done by Dr. Russel Reiter from the University of Texas Health Science Center at San Antonio found the same thing. The more light you’re exposed to, the less melatonin your pineal gland releases. When there’s lower levels of melatonin in your body, there’s an increase in ovulation in women and sperm production in men.

4. Sunlight Is Good For Arousal

As the above point mentioned, sunlight bottles down on melatonin levels, which increases ovulation and sperm production. But getting some good ol’ sunshine also has a direct effect on serotonin production in the brain. According to researchers at the Human Neurotransmitter Laboratory and the Baker Heart Research Institute in Australia, our serotonin levels increase with sun exposure, which is important because serotonin regulates arousal.

Sunlight also increases the amount of dopamine in the body. If you didn’t already know, dopamine is a hormone that’s also known to stimulate libido by triggering testosterone.

5. The Heat Makes Us More Sensual

According to psychologist, Stella Resnick, author of “The Pleasure Zone,” summer heat is good for our muscles. It relaxes them and “intensifies sensations of the skin.” Because of that, we’re more able to get in touch with our sensual sides.

Obviously, more people sweat during the summer. But instead of feeling gross, relish in it, because sweat is actually good for your sex life. According to Alan Hirsh, a psychologist and director of the Smell and Taste Treatment and Research Foundation in Chicago, our scent glands in our skin secrete pheromones when we sweat. If we know anything about pheromones, it triggers areas in the brain dealing with sexual urges and desire.