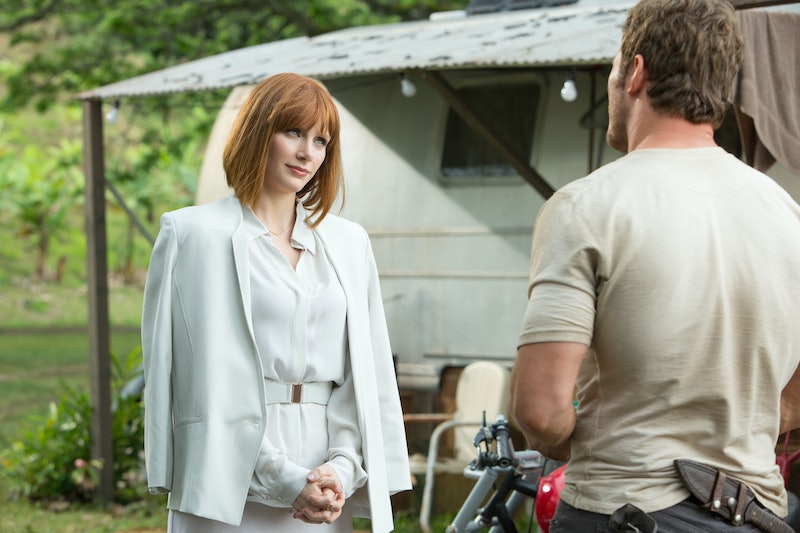 Here's some completely expected news: this summer's biggest action flick, Jurassic World , is getting a sequel. The new dinosaur film recently surpassed The Avengers and took the superhero movie's slot as the third highest grossing movie in the world, so there was really no chance of Jurassic World not getting another addition to the franchise. According to The Hollywood Reporter, Chris Pratt and Bryce Dallas Howard are both set to return to the franchise, and the film has been set for a 2018 release.

I'm on board with another Jurassic Park movie (who wouldn't want to see more dinosaurs take over what is essentially Disney World with living animatronics?) but there is one thing that I hope that the new film does, and it has nothing to do with a bigger, badder dinosaur with sharper teeth — I want the Jurassic World sequel to give Bryce Dallas Howard's character more of a starring role.

Howard is one of the film's two stars, yet when it came to saving the day, that all went to Pratt's character. Howard's character Claire is an uptight, high-heel wearing park manager, who butts heads with Pratt's rugged, dirty tee shirt donning raptor trainer Owen. Claire is clearly brilliant, but she's also cold and not particularly concerned with humans or dinosaurs she is placed in charge of. In fact, her own sister chastises her for her lack of maternal instinct, insisting that one day she'll understand what it's like when she has kids of her own. OK, then.

Owen, on the other hand, is warm, street smart, and very capable of dealing with a dinosaur disaster. Claire is mostly there to watch as he saves the day, the dinosaurs, and the park from total destruction.

There's nothing inherently wrong with a woman playing the role of a cold, stiff woman who prefers taking care of her daily job duties to her visiting nephews, but it would be great if this new sequel gave Claire's character more depth — perhaps by delving into her backstory, or her personal life. In Jurassic world, her "transformation" to a caring individual happens almost as if spurred exclusively by her connection with new-beau Owen. I say, keep her uncaring if that's how this character really is — but at least let her use her obvious brains to help contain Jurassic World's dinosaur problem.

In this sequel, Claire should be allowed to do all of the things that Jurassic World suggested she's capable of. Claire doesn't have to tackle raptors or fight off a T-Rex with a spear, but she should contribute to saving the world in her own way. Claire doesn't have to operate like Owen in order to be a heroine of the story, but she should definitely showcase all that I and the rest of the audience knows she's capable of.