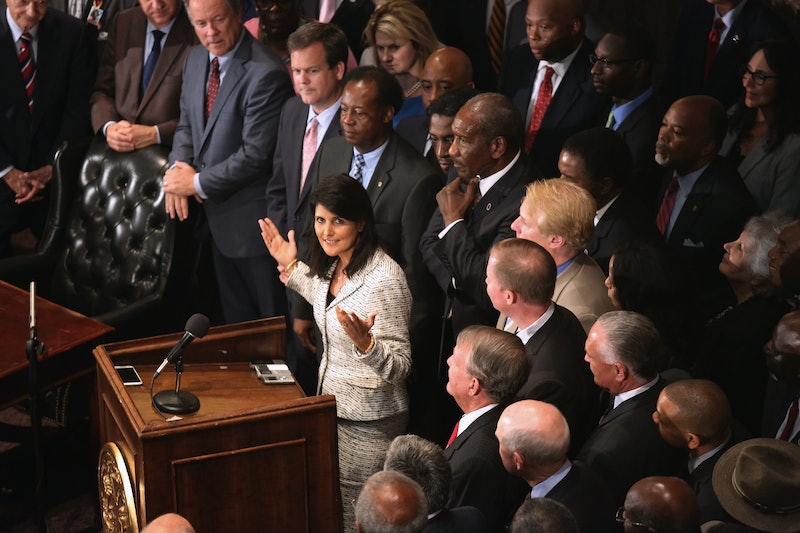 With Hillary Clinton in a comfortable lead for the Democratic nomination and Carly Fiorinia vying for the Republican nod, 2016 will certainly be a history-making election for American women. But advocates for women’s issues shouldn’t be blinded by the high number of female presidential contenders this year. Women may actually lose important ground in the 2016 elections, as precious few women are running for governor in 2016. Out of 15 gubernatorial races in 2015/2016, only three states will have female candidates on their ballots.

The trends for women in state-level offices are pretty bleak. According to the Center on Women in Politics, women are stuck at just 20 percent of Congress and around 25 percent of statewide executive offices for the second year in a row. As of the election of Oregon Gov. Kate Brown earlier this year, there are only six women currently serving as governor in the U.S.: Gov. Brown (D), Rhode Island Gov. Kate Raimondo (D), New Hampshire Gov. Maggie Hassan (D, South Carolina Gov. Nikki Haley (R), Oklahoma Gov. Mary Fallin (R), and New Mexico Gov. Susana Martinez (R). Such a tiny a percentage of women currently serving as governor — and so few women interested in running in the coming year — doesn't bode well for advocates looking to advance issues that matter to female voters.

Plus, since one of the more common paths to the White House is from a governor's office, having so few women in governorships today could have implications for future presidential elections. That's why it'll be important to watch the races for governor in Missouri, Indiana, and Delaware next year — those are the only three states where women will be on the ballot.

Republican contender Lacey Lafferty announced her bid for Delaware's governor slot back in 2013. In her campaign video, Lafferty talked about her long-held belief in hard work and honesty. Lafferty is a retired state police officer who chose to run for governor (rather than a county or legislative office) because it offered the best avenue to make a wholesale impact in the state. In an interview with the Delaware Online at the start of her campaign, Lafferty said: "For me to go through the legislative process, it's too frustrating. I'm one of those people, I like to get things done. You put forth a bill and then it goes to a committee, and then it goes in a drawer, and then it's tabled and it goes away. To me, that's truly frustrating."

Catherine Hanaway is running for governor of Missouri in 2016. It's a race that took a tragic turn earlier this year, when leading Republican candidate Tom Schweich took his own life. Hanaway was the first woman to serve as Speaker of the Missouri House of Representatives, and is also a former U.S. Attorney. If elected, she would be the state's first female governor.

Democrats in Indiana will have to choose between two female candidates in the next gubernatorial election. State Schools Superintendent Glenda Ritz is running on a platform that, predictably, puts emphasis on strengthening education standards, according to Indianapolis NBC affiliate WTHR. State Senator Kate Tallian is considered the underdog in the election, according to local reports. Tallian told reporters for Indiana station WISH that she plans to offer voters a progressive alternative in the race, with a platform that includes pushing for more lenient marijuana laws.

Who sits in the governor's office has important implications for state policy and the number of women primed for national elections. Right now, there are only six women holding these critical positions nationwide. And if New Hampshire Gov. Hassan decides to run for Senate, that number will dwindle even further. While all eyes are on the 2016 race for president, we shouldn't ignore the races in these key states, since they may help decide which women are considered "electable" in 2020 and beyond.

More like this
How To Fight For Reproductive Rights, Based On How Much Time You Have
By Courtney Young
Sandra Bullock, Girlboss Extraordinaire
By Matt Harkins & Viviana Olen
Michigan’s Governor Is “Going To Fight Like Hell” To Protect Abortion Access
By Andrea Zelinski
Yes, Billboard Queen Angelyne Really Ran For Governor Of California
By Brad Witter
Get Even More From Bustle — Sign Up For The Newsletter