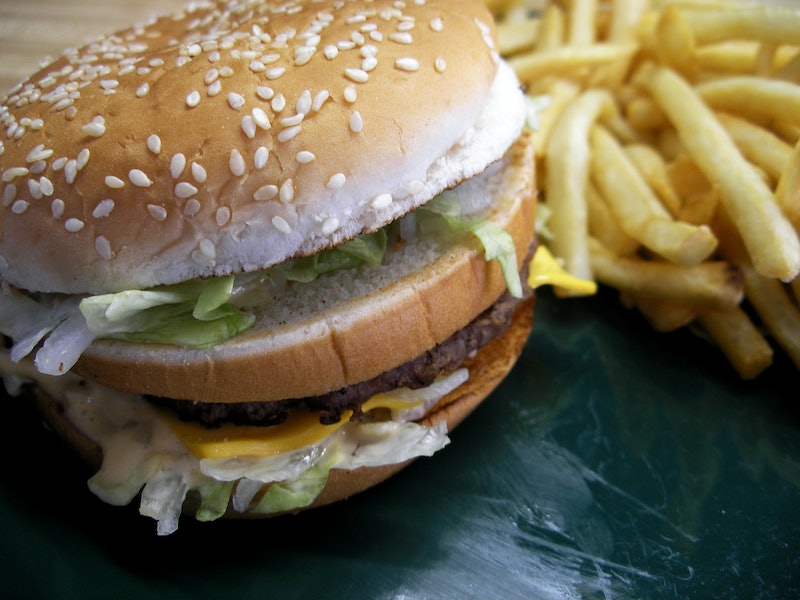 Ever since news of a McDonald's secret menu threatened to break the Internet in a way not even Kim Kardashian could manage, fast food enthusiasts have been clamoring to get their hands on items like the rumored Chicken McGriddle and the Land, Sea, and Air burger that are allegedly up for grabs, so long as you know what to order and how. A tad bit skeptical that such things existed, I decided to go on a little foodie adventure myself — I tried to order off of the McDonald's secret menu and get a taste (and a few photos) of the crazy items people are suddenly obsessing over.

It seemed simple enough. The McDonald's manager who spilled the beans (burgers?) during a Reddit "Ask Me Anything" interview a few days ago said that if a customer can explain what they want, they can get it. I explain my bizarre recipe ideas to my boyfriend daily. How different could this be? It would be as easy as a McDonald's apple pie, which is pretty flippin' easy, all things considered... or so I thought.

The responses I received from my Mickey D's servers ranged from confusion to fremdschämen, a useful German word for feeling vicarious embarrassment for a person who should actually be embarrassed. Basically, all three of the servers from whom I attempted to solicit a simple Monster Mac (eight beef patties piled into a single sandwich) thought that I was an escapee from the nearby mental hospital.

And the results were comedy gold.

It was 10:40 in the morning, and the first thing that the woman told me was that they were no longer serving breakfast. Alright. So I explained that I am a reporter, and asked her if she had heard of the secret menu. She said no. I told her that a McDonald's manager did an interview on a site called Reddit confirming that, in the words of R. Kelly, if I can dream it, then I can do it.

The woman then asked me if I was looking for "that boys.com discount thing." No discount, I said, just a few off-menu burgers like the Land, Sea, and Air: a sandwich comprised of a burger patty, a Filet-O-Fish, and a McChicken.

She silently furrowed her brow like a kid staring down a heaping plate of Brussels sprouts.

I kept talking, reassuring her that I was willing to pay for all of the ingredients, and that these sandwiches were actually real, and that people were successfully ordering them all over the country.

She shook her head, grossed out: "I don't think so."

I apologized, and exited my first McDonald's.

I thought that maybe because this was my second attempt, perhaps my charm would be more effective. This time, I came armed with Instagram photos tagged with #mcdonaldssecretmenu to help me explain what I wanted. Visual aids! I couldn't be stopped.

I started my order with a statement rather than a question. McDonald's has a secret menu, I said, and I intended to order these items from it. The server hadn't heard of it, but was receptive to the concept, which was progress from my previous interaction.

After a minute or so of scrolling through the Instagram photos of the lucky few people who have been able to convince their servers to make them the special secret burgers, my server chuckled and agreed that the McGangBang was, in fact, funny, but that, "yeah, there's no button for that."

We were getting nowhere here.

He excitedly offered to make me a new sirloin burger instead. I declined his gesture of good will, and went about my day, determined to give this endeavor another shot.

Third time's a charm, right? RIGHT?! I had a drink at dinner, thinking maybe what I was missing was a little enthusiastic assertiveness that goes beyond my normal #southerngirl behavior. It was pretty late, and cheeseburgers look weird with flash photography, but I arrived with a renewed determination. It was going down, and it was going down now.

Me: "Hi there, I'm a writer, and I'm working on a story about the McDonald's secret menu! Have you..."

But before I could finish my monologue, my server interrupted me.

I had to admit defeat. McDonald's stores in L.A. are just not into the secret menu with the same kind of fervor as the rest of the nation. Still, I can't wait to take the inevitable forthcoming viral quiz "What your favorite McDonald's secret menu item says about you." I may not have been successful ordering a Land, Sea, and Air sandwich, but I can at least dream about it.