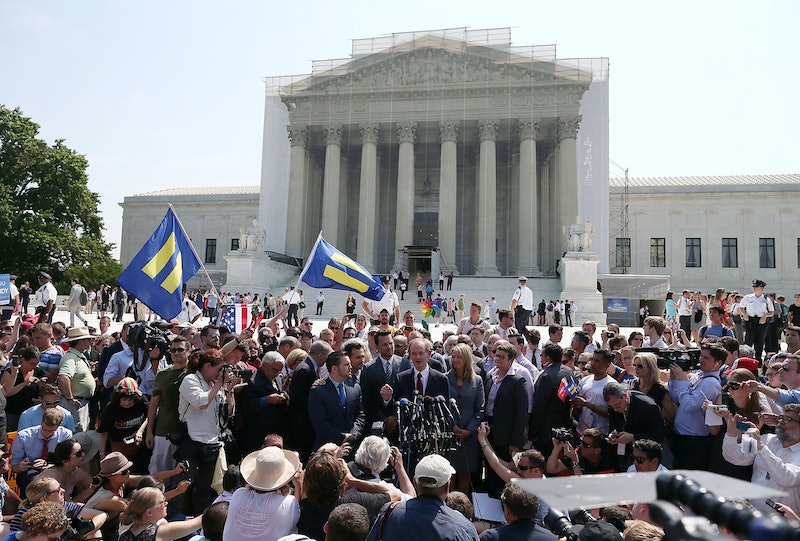 Boy, is the President's glad his views "evolved" in time for this one.

So glad, he even made a video!

Openly gay Rep. Mark Takano (D-CA) was feeling all pride and no shame:

Sen. Tammy Baldwin (D-WI), the first openly gay person to serve in the Senate, was a little more guarded in her celebration.

"While this is a huge step forward for our country, the fight to make America more equal does not end with a Supreme Court decision," Baldwin said in a written statement. "There is more work to be done to fulfill the promise of freedom and equality for all – in which America becomes a place where every family’s love and commitment can be recognized and respected under the law.”

Former congressman Barney Frank told Rachel Maddow on MSNBC, "It isn't everything, but it is a good indication that everything is not too far away."

Former President Bill Clinton and Secretary of State Hilary Clinton issued a joint statement saying "The Court recognized that discrimination towards any group holds us all back in our efforts to form a more perfect union." Just don't look too closely at Bill's record on this one.

Meanwhile, Rep. Nancy Pelosi (D-CA) acted all casual, telling reporters, "[It's] no surprise to me that it was struck down." But we saw her grinning when she read the news.

And of course, the haters were always gonna hate.

"Today, the U.S. Supreme Court decided to join the trend, despite the clear will of the people’s representatives through DOMA. What the Court has done will undermine the best interest of children and the best interests of the United States."

Nancy Pelosi had just two words for her.

Speaker of the House John Boehner (R-OH) didn't quite cry about it, but he did say he was "disappointed."

And leaders from anti-same-sex marriage groups like the Family Research Council, Focus on the Family, and the American Family Association all signed on to a "Marriage Solidarity Statement," in which they promised to continue their crusade against equality.

"While there are many things we can endure, redefining marriage is so fundamental to the natural order and the true common good that this is the line we must draw and one we cannot and will not cross," the group's statement read.

But there was nothing anybody could say that was gonna bring down Edith Windsor today.

"I wanna go to Stonewall right now!" shouted the woman who'd brought the original challenge to DOMA when she heard the news. If this photo doesn't warm your heart, you might want to get your pulse checked.