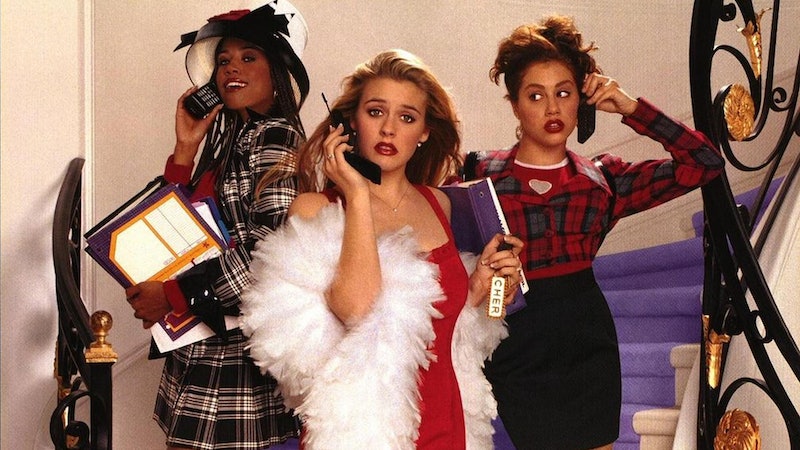 20 years later, and we're still dressing like Cher Horowitz, whether it's Iggy Azalea in her music video or the piles of plaid seen all over Forever 21 and H&M. It's no doubt that the film had a huge cultural impact, particularly in fashion, and for its anniversary, Clueless writer and director Amy Heckerling discusses how she made pop culture history, along with costume designer Mona May and some other members of the cast, including actors Wallace Shawn (Mr. Hall) and Justin Walker (Christian).

Here's how the cast and crew explained the oh-so-influential oral history of Cluelessin their own words.

Believe it or not, Heckerling actually went to Fox with a pilot she had written, but ended up really falling in love with the main character. It wasn't picked up (thank God for this), and she actually started working on the pilot more with costume designer Mona May. Together, these two played with fashion and lingo, and thus, the impetus for the iconic movie was born. May told Uproxx, "The fashion was almost like a character in the film. What was interesting for me was translating my love of fashion into the costume designing. Because fashion is really creating clothes for the future—people have not worn it, you haven’t seen it—and combining it with crazy characters in film is really interesting."

"Chapter 2: Is This Like A Noxzema Commercial Or What?"

To see what actual high school kids were wearing at the time, Heckerling visited Beverly Hills High, along with a handful of other high schools, but found one thing and one thing only: grunge. Of course, it was the '90s! So, she had to twist her vision a bit—"So, it wasn’t exactly what I observed, it was more to see what was going on and if any of that would be useful for what I was trying to imagine." She said.

As for Alicia Silverstone? Well, she wasn't exactly a carbon copy of Cher. Heckerling said, "She is just a real bohemian, Earth mother, vegan mommy. She cares more about helping animals than what shoes she’s going to wear. I think the main thing is that they’re not made out of animals." That's some good acting, then!

Also, did you know that since they had a pretty tight budget, Heckerling and May would ask the cast to bring their own clothes, then scrounge up some outfits from there? Pretty nifty!

On to the boys. Originally, Heckerling was actually thinking of casting Dave Chappelle as Murray, until she realized he was a little too real. They wanted to cast Murray as a "wannabe, a kid that grew up in a wealthy neighborhood and had all the advantages and all the education that somebody who had to be a scrapper could get any piece of the pie."

Thus began the mixing of high and low fashion—what seems so normal now (thanks Ye) was actually brand spankin' new back in the '90s. Mixing Dolce with thrift shops? Super unique at the time, but part of the norm now.

Probably one of the most iconic looks in the entire movie is the girls' gym ensembles—remember Amber's Pippi Longstockings look? I'm pretty sure after that movie came out, the t-shirt and tank top on top thing took the world by storm.

Heckler said, "In the whole film we took something very mundane and very every day and made it a fashion statement." Genius.

"Chapter 5: Do You Prefer Fashion Victim Or Ensembly Challenged?"

Who could forget the budding romance between Mr. Hall and Ms. Geist? Ms. Geist was actually based on Heckerling's former English teacher in high school—make up everywhere, frazzled looks, glasses.

These two characters' looks were just as important as the main characters, because to Heckerling and May, every person had to look like they belonged. And they did exactly that.

"Chapter 6: I Was Just Totally Clueless"

Why is Clueless so timeless, exactly? Walker attributes it to creating a larger context. "Because it’s not just of an era, it’s of its own era. It created its own genre. If you watch it, almost nothing about it is dated. The kind of tone we were using, but the clothes and everything speak for themselves. The dialogue, the characters, the relationships, the comedy. That was all timeless."

Clueless isn't just staying in the big screen, either. It's being adapted into a musical, that both Heckerling and May are working on. Imagine, 20 years later, it still holds relevance in style. "It’s so cross-cultural because I can meet someone in their 40s who was a young woman then, and I can meet someone in their 30s, and then the teenage girls, the Rookie Magazine readers who still love Clueless. Straight women, gay men, it’s everybody. It’s great and incredibly satisfying," said May.