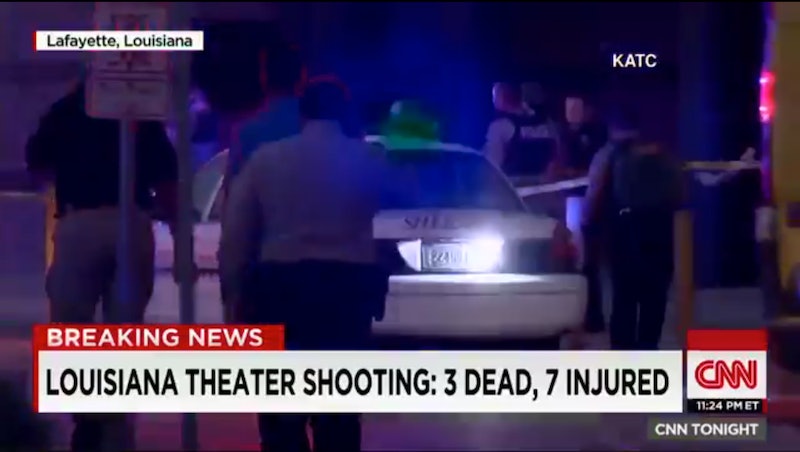 Police are interviewing witnesses to a theater shooting in Lafayette, La., an attack that has left three dead and seven injured. According to authorities, at about 7:30 p.m. local time, a gunman opened fire in a movie theater during a viewing of Trainwreck. Police heard shots fired and immediately ran into the theater. Authorities said that at least three individuals are dead, including the man believed to be the shooter.

Sgt. Brooks David of the Louisiana State Police said the scene is currently safe, and police are in the process of interviewing witnesses who were at the scene and attempting to put together information about the shooter. The only details released about the shooter thus far was that he was a lone white male, aged 58, and reportedly died from a self-inflicted gunshot wound. The suspect may have had a criminal record, though Police Chief Jim Craft said it was largely outdated. Police said there were approximately 100 people within the theater.

One witness, Katie Domingue told the Daily Advertiser newspaper the shooter was an older white man, who opened fired about 20 minutes after the movie started. "He wasn't saying anything. I didn't hear anybody screaming, either," Domingue said.

Another man, Keifer Sanders, was not in the theater with the shooter but told MSNBC the screen in his theater went black, and alarms went off as the audience were told to move toward the emergency exits.

Roxy Martinez and her brother Robert Martinez told KATC they were in the theater. "A whole bunch of girls started screaming and we heard that someone was shot," she said. "There were a lot of people running." Her brother reportedly saw one of the victims, saying, "I see [sic] a lady full of blood in a dress. She was just looking at me in complete fear."

"When we got outside, we heard three shots, not very loudly," Jacob Broussard told Don Lemon of CNN. According to Broussard, he was in a different theater. "We were like, 'Man, what was that?' When we walked around to the front of the theater, there was a woman who had been shot in the leg, and she was definitely bleeding."

"We found out that he had been holding hostages, and then a few minutes later we heard he killed himself," Broussard said. According to Lemon, authorities have not released any statements regarding hostages. Broussard told CNN that police were searching cars before allowing theatergoers to leave.

Lafayette is located about 60 miles southwest of the state capital, Baton Rouge. Gov. Bobby Jindal arrived at the scene quickly in order to meet with authorities. "I know a lot of us are horrified and shocked," Jindal said. "I think I speak for every mom and dad who just wants to hug their kids." According to Jindal, the severity of the injuries vary, and one victim has already been discharged from the hospital.

Police currently are not releasing details on the motive, or why the Grand Theatre 16 was targeted. They have the identity of the shooter but are not releasing it, though police say the attacker has a criminal record that is "pretty old." The shooter's vehicle has been identified, though the crime scene is on hold until they determine if a suspicious package within the car is a bomb.