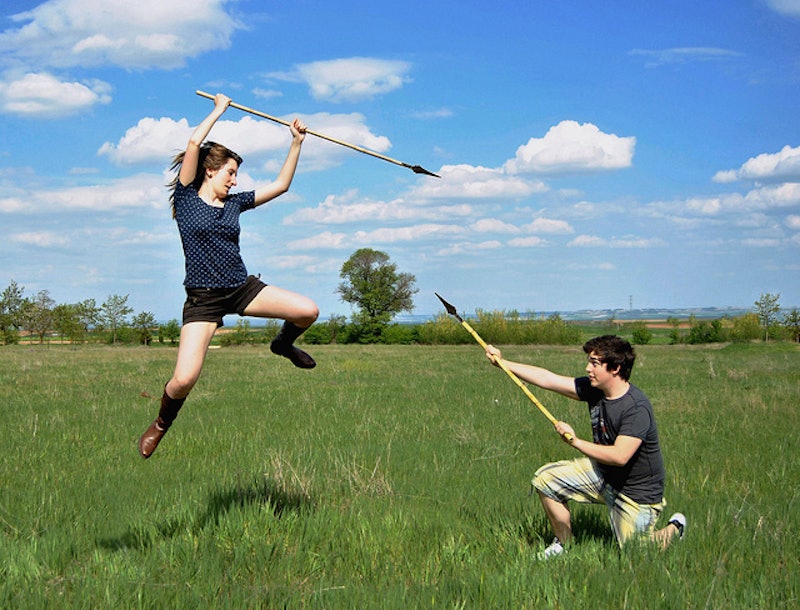 Anybody ever call you an "alpha female"? They probably meant it as a compliment — kind of. The concept of the alpha female and male is common in zoology, and basically refers to dominance: the boss at the top of the pile who kicks tail, takes names, and will fight off any chance to unseat him or her. Men in particular get bombarded with this concept a lot: they're told to aspire to "alpha male" status, for professional success and to get the ladies they want. But is it actually that simple?

There's no doubt that certain power hierarchies exist in small human groups, socially, economically and otherwise. (Hence Mean Girls.) But there's been doubt for a while about whether the concept of the "alpha" is actually a bit too complicated for humans and their social systems. Can we really be divided up into alphas and betas, and does it really affect how we interact with each other and what mates we pick up? Or is it just an over-enthusiastic concept?

This sh*t matters — because even though humans are basically animals, if we think about how we interact in the wrong way, we're going to cause all kinds of interpersonal problems, and strive for dominance that we may not really need. Let's go poking about the alpha wasp's nest and see what we find.

What Is Alpha Male Theory?

The theory of the alpha-beta hierarchy comes from examination of the group dynamics of certain animals in the wild, and how they manage their social systems. It's a pretty basic system.

The idea is that one dominant male is at the head of a big "pack" of males and females, and maintains his dominance by fighting off challenges from the other lower (beta) males. He gets his pick of the females, protects the territory, and fathers all of the children among the females. Alpha dominance displays have been seen in animals as diverse as walruses (where males and females actually have separate herds) and meerkats.

As Ian Steadman pointed out in New Statesman , alpha male theory is an intrinsic part of the "science" behind modern pick-up artistry — the pick-up artist demonstrates his "dominance" and therefore expects to be given his due, i.e. the sexual favors of any female who happens to be around. The potential for alpha male theory to be used as a tool of misogynist idiots doesn't automatically invalidate it — but it certainly should make us examine it very closely indeed.

Is It Really How Animals Organize?

One problem with the alpha male idea is that it may not be as widely spread among animals as we once thought. Wolves examined in captivity followed an alpha-beta hierarchical system, where younger wolves rose up the hierarchy to eventually displace the lead male, but we've now looked at them in the wild — and it's been concluded they do something a bit different when left to their own devices.

Instead of living in packs unrelated by blood and fighting for dominance, it turns out that wolves generally live as families — parents and children. The parents are obviously in charge, and when children get big they're encouraged (and sometimes shoved) to go form their own little families and become parents on their own. Parents still get dominant over uppity youngsters and foreign wolves, but it's not what we thought.

It's not intrinsically part of the primate lifestyle, either. Gorillas have fights for dominance in their big social groups, but bonobos, an exceptionally close genetic relative to humans, determine bonds through sex and are probably a matriarchal society. Gibbons, like wolves, live in small family groups with one breeding pair and their children. Gorillas are often used to predict that all apes show alpha behavior — but the reality's much more diverse. There's nothing "built in" to our ape-like brains that determines a need to be dominant to win a partner.

Is It Applicable To Humans?

Another problem with applying this theory to us is that humans don't move in the same packs all the time. We have a lot of different social spheres — that's the entire basis of Google Plus's "circles" — and all of them will have different members, different activities, and different modes of relation. We have the most complex social lives on earth. While gorillas, for example, can spend a lot of time and energy fighting over dominance of their one social group, which involves their family, mates, and friends, that's not how we work. We may be head of the pack on a Friday night at the pub and groveling at work on a Monday.

This is new in human evolution: never before have we known so many people, or been capable of connecting with so many other individuals at once. So the idea of an alpha person, whether innate or through displays of dominance, may no longer apply neatly to us.

So, What's Really Going On?

Instead of a plain alpha male/female idea, where humans fight for dominance over a single society, it looks like a more nuanced theory is necessary. One suggestion is the broader idea of social dominance — which can basically be distilled to confidence. Being the Taylor Swift of your friendship group involves ironclad self-belief as well as aggressive social behavior. But it's now believed by psychologists that, beyond a certain level, confidence can actually be a psychological turn-off. We do like dominant people, but they aren't universally attractive to us.

And it doesn't end there. Dominance theory has shaped a lot of science — but if you look at it in a more nuanced way, the evidence can lead in other directions entirely. In the past, women's possible preference for more "masculine" partners — who smell more strongly of testosterone, for example — was thought to be linked to wanting a dominant male. But it now looks like we just want healthy partners with strong immune systems, not somebody who frequently wrestles bears.

Similarly, female preference for more "masculine" face shapes (stronger jaw lines, for example) seemed to have been traced in a 2012 study to something besides high testosterone levels: dudes with those face shapes may have higher resistance to disease and lower stress levels. Strong-jawed dudes are healthy dudes, which may be why we want them — not because they're fighting off other men.

And if the "alpha" idea applied to both human sexes, men might also desire women who displayed physical traits associated with dominance and aggressive behavior — like higher testosterone levels. But the opposite seems to be true. The women who are rated most desirable show childlike feminine traits — big lips, for instance — which are associated with high levels of hormonal fertility, rather than aggression.

The idea that humans like socially "dominant" people has influenced a lot of things. But it's increasingly looking like our sexual and friend preferences are a bit broader and more complicated than just who's at the top of the tree.