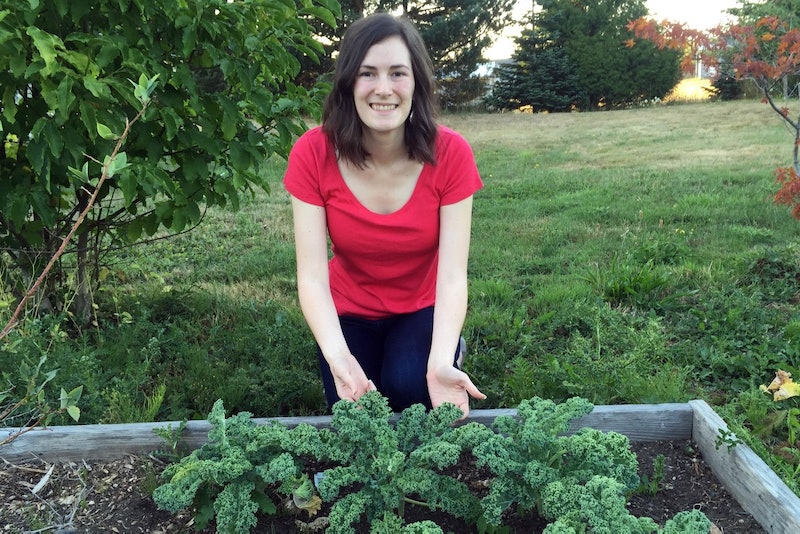 When I was a kid, my parents were extremely strict about my eating habits. Sugar was in such short supply at my house that I’d sneak hits of syrup straight from the bottle in the pantry. I looked forward to sleepovers at friends' houses as not just a chance to play truth or dare, but also to have a rare bowl of Lucky Charms or Cocoa Puffs the following morning. It was even common knowledge at school that white bread was banned at my house. By the time I got my driver’s license, it’s no wonder that caramel Frappuccinos became an all-too-common purchase.

It took several years, but as an adult, I realized that my parents were onto something. The more I learn about processed food, the more I become concerned about what I consume. Research shows that what we eat affects every aspect of our health, so it's getting harder to bury our heads in the sand. Chemical- and additive-filled foods have come under fire, and for good reason.

Reading Unprocessed: My City-Dwelling Year of Reclaiming Real Food by Megan Kimble inspired me to follow the author’s lead and try eliminating processed foods from my diet. Not only does the book discuss the health benefits, it highlights how the American food system fails to protect consumers. There’s a strong case against processed foods, and it convinced me to try to eat cleaner.

My plan was to go two weeks without eating processed food. I used Kimble’s book and online research to decide what exactly that would mean for me. Basically, I considered any food that I (or someone else) could grow, find in nature, or cook in a kitchen to be OK to eat. Anything that would require a chemist or a laboratory to produce it was not.

My unprocessed period started the Monday after the Fourth of July, so I went out with a bang. In addition to enjoying delicious barbecue food on the holiday itself, I spent the weekend indulging my every processed whim. By the time I woke up on the day I was set to start, I had gained three pounds, and my stomach was still unhappy after my dinner at a Mexican restaurant the night before. (I blame the massive margarita.)

That first day was a rude awakening: I knew how to go unprocessed in theory, but I hadn’t given enough thought to what I’d eat on a daily basis. Because of my lack of preparation, it took me a bit to hit my stride; I subsisted on eggs, vegetables, quinoa, brown rice, and nuts those first few days.

As I started building an inventory of unprocessed food, I turned to my local farmer’s market and food co-op. Shopping was a little slower than usual because I spent a lot of time reading labels. These ingredient lists were a huge help in figuring out what I could and couldn’t eat. Whenever I hit an ingredient I didn’t know, I returned the item to the shelf. It did mean that there were foods I had to go without (such as tomato sauce, sadly), but it encouraged me to buy a lot more produce.

Buying unprocessed food was more expensive, but not wildly so. Over my two-week trial, I spent about $0.90 cents more a day than I do in a typical month. While that does certainly add up over time, I’d argue that the number was inflated because there were staple ingredients I had to stock up on at the beginning. Had I continued for a full 30 days, I think my average cost would have decreased. It’s also important to note that a couple of my meals fed multiple people, and that there were definitely ways I could have been more frugal — since I wasn’t splurging on chai tea lattes, I was OK with spending more on locally grown shiitake mushrooms.

Although I enjoy cooking, I don’t typically do it as much as I should. That changed when I was eating unprocessed because there wasn’t much of an alternative. I quickly realized that I needed to find some recipes that would work for me, and I fortunately stumbled across a blog called The Vegan 8. The recipes were a lifesaver for me because they were either already unprocessed, or could easily be made so. That’s not the case for a lot of vegetarian recipes; they often call for tofu or meat substitutes, which are almost always processed.

Whenever possible, I made large batches so I could eat leftovers later and minimize my time in the kitchen. Cooking with others also worked out well because it meant multiple dishes without having to be the one to prepare them all.

As repetitive as my cooking was at the beginning, I was surprised by how good a simple meal could taste. While eating unprocessed, I used a lot of sea salt and ground pepper and was amazed by just what those two ingredients could do. In the past I’ve tended to go for strong flavors, but I realized that they aren’t as necessary as I thought.

There were a lot of foods that were unexpectedly easy to give up. Granted, two weeks isn’t that long, but I did notice that there were a lot of good unprocessed substitutes out there. It turned out that dates, for example, curbed my cravings for sweets, whereas normally I’d have gone for chocolate.

Without processed foods, I also found that I snacked less and the snacks that I ended up consuming were good for me, like fruits, vegetables, or nuts. Looking back, I don’t remember a single time during the two-week period where I ate just to eat; I ate because I was hungry.

When my sister asked me if I felt any different during my unprocessed experiment, I told her that I did. I’m still not even sure how to describe it, but I just felt better. Overall, I somehow felt healthier and more energetic, plus I had less abdominal pain, which is something that I’ve dealt with for years. I won’t pretend it was all sunshine and rainbows, though. For the first few days, I apparently wasn’t eating enough fiber. Until I consciously increased my intake, that was definitely a problem.

Over the course of the two weeks, I ended up losing weight. The three pounds I gained going into it melted away, as did an additional two pounds. It was the easiest weight I’ve ever lost; I wasn’t consciously trying to do it, and I never restricted my portions.

The fact that I was eating unprocessed came up a lot with family and friends, and I started to feel like I was on an episode of Portlandia. I used the phrases “organic,” “unprocessed,” and “local” so many times that if you’d made it a drinking game and followed me around, you’d have been trashed for two weeks straight.

With all of the constraints on my eating, finding somewhere I could eat out wasn’t easy. In fact, I’d say I managed it on one-and-a-half occasions. My first attempt ended in me eating at the food co-op with a friend after he enthusiastically hunted down organic, unprocessed bread and nut butter for me. It tasted great and was a fun adventure, but it was a shadow of the typical dining out experience.

My unprocessed experiment went by quickly — to the point that I almost wished it had been longer. Still, to commemorate the end, I felt like I should really fall off the wagon by gorging on food with mysterious ingredients. (Go big or go home, right?)

Strangely, eating junk food was pretty miserable. In just two weeks, my taste buds seemed to have re-calibrated. I was weirdly overwhelmed by the salty, flavorful chips I chose, and then horrified to realize how hard it was to stop eating them in spite of it. Bringing processed foods back into the mix suddenly reminded me of what it was like to be painfully full and how easy it can be to overeat. It was a perfect example of how food is engineered to be addictive and a reminder of one of the many reasons I’d wanted to go unprocessed in the first place.

I can’t say that I’ll never eat processed food again, but because of my experience, I’ve resolved to focus more on eating less of it. I'd thought that having to cook so often would be the hardest part, but that ended up being less of an effort than I expected. Instead, what I found most challenging were the social limitations; I missed being able to go out for meals with friends and family. I don't see this as an all-or-nothing commitment, though. Eating mostly unprocessed at home — while making exceptions to eat out on occasion — still seems like progress to me.

More like this
The 77 Cheapest, Most Clever Gifts On Amazon
By Rebecca Martinson
How Long Does Leftover Stuffing Last? Here's When To Toss It
By Chelsey Grasso and Alexis Morillo
16 Friendsgiving Recipes Your Besties Will Love
By Alexis Morillo
18 Zen-Inducing Gifts For Your Friend Who's Into Mindfulness
By Carolyn Steber
Get Even More From Bustle — Sign Up For The Newsletter