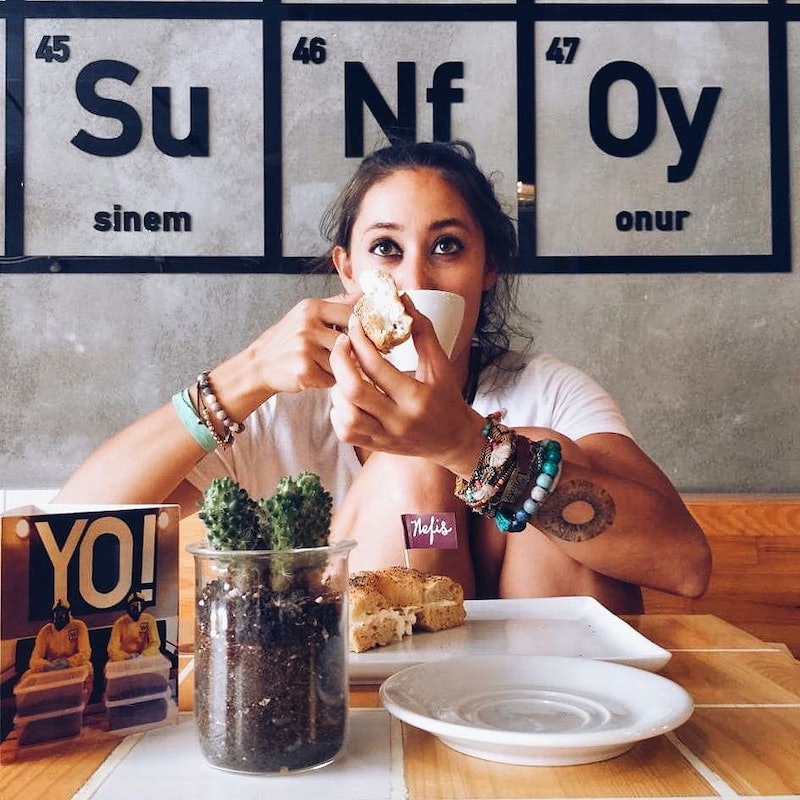 What if Walter White had, in the pilot episode of Breaking Bad, decided to go into the coffee business? Though it would have been a pretty different, and probably cuter, show, that question is answered by Walter's Coffee Roastery, a Breaking Bad– themed coffee shop (h/t Bored Panda) that just opened in Istanbul. While it's not quite Gale's coffee maker, it looks pretty awesome.

Rather than just putting the name of the show on some of their products, this coffee company has gone all the way with its concept, marketing itself as "the world's first Coffee Super Lab." The shop opened in March, and the concept came from entrepreneur Deniz Kosan, a Breaking Bad fan. Everything from the roasting equipment to the beaker-esque espresso cups to the industrial space brings to mind a meth lab, albeit a very hip and clean one. Additionally, there's a periodic table on the walls, and it appears that the owners wear hazmat suits on the regular. There are pancakes with Walter's face and some Blue Sky–decorated cupcakes that honestly look pretty tasty. So clearly this place knows the importance of a good breakfast. Walter, Jr. would approve.

The coffee shop apparently has some competition (and is apparently trying to start a Twitter feud) with a Breaking Bad– themed popup bar in London. While it looks a little less hip than Walter's Coffee, it does have the authentic touch of being inside an actual RV, and for $47, those entering can create their own drinks.

My question is: When is one of these things going to open up in the States, specifically in New Mexico? In the meantime, I'll be saving up for a trip to Turkey to eat the Say My Name pancakes:

While its website appears to be down, hopefully it'll be able to ship its coffee internationally:

Maybe even its awesome equipment:

Seriously those cupcakes though:

More like this
Justin Timberlake’s ‘Candy’ Character Really Investigated Betty Gore’s Killing
By Brad Witter
Betty Gore’s Daughter Honored Her After She Became A Mother Herself
By Brad Witter
Where Is Allan Gore Now? The ‘Candy’ Subject Moved On Shortly After Betty’s Death
By Gretchen Smail
The True Story Of Candy Montgomery From Hulu’s True Crime Series
By Radhika Menon
Get Even More From Bustle — Sign Up For The Newsletter