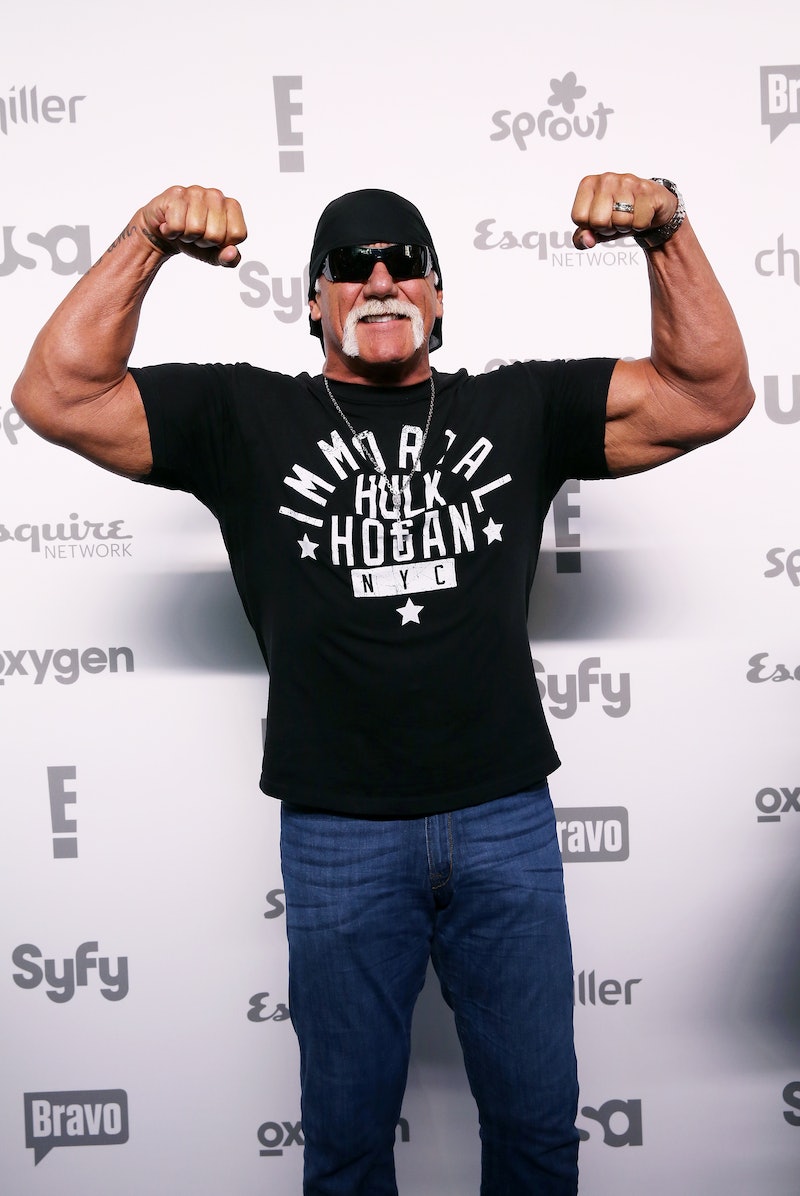 On Friday, July 24, a rep for the wrestling organization told FOX411 that WWE allegedly terminated Hulk Hogan's contract. The exact reason for Hogan's reported termination has not yet been revealed, but many publications are citing recorded footage of the 61-year-old former wrestler, real name Terry Bollea, allegedly making racist remarks in a radio interview in 2012 and in a sex tape that was filmed in 2008. The WWE website has deleted Hogan-related items, including his inclusion on the list of Hall of Fame members and all merchandise related to the wrestler. On Friday, the following statement was released by the WWE:

WWE terminated its contract with Terry Bollea (aka Hulk Hogan). WWE is committed to embracing and celebrating individuals from all backgrounds as demonstrated by the diversity of our employees, performers and fans worldwide.

Soon after the news came out, Hogan released a statement to People, which reads,

Eight years ago I used offensive language during a conversation. It was unacceptable for me to have used that offensive language; there is no excuse for it; and I apologize for having done it. This is not who I am. I believe very strongly that every person in the world is important and should not be treated differently based on race, gender, orientation, religious beliefs or otherwise. I am disappointed with myself that I used language that is offensive and inconsistent with my own beliefs.

Hogan's lawyer, David Houston, said that the wrestler was not fired, but resigned from the WWE. Houston told People, "He decided to resign from WWE because he didn't want to put them or his family through this."

According to RadarOnline and The National Enquirer's joint investigation, Hogan allegedly made racist remarks when filming a sex tape with Heather Clem. Speaking to Clem in the video, he reportedly "unleashes a filthy bigoted attack" in regards to his daughter Brooke dating and sleeping with a black man. According to multiple sources, he can be heard saying on the tape, "I guess we’re all a little racist." As for the 2012 radio interview, Hogan allegedly uses the n-word multiple times.

Many have taken to Twitter to talk about the situation, and it appears fans are both shocked and saddened to learn that one of their favorite wrestlers made racist remarks. Basically, they feel like their '80s childhood was a sham:

With that said, there are many Hogan supporters who are still remaining loyal to the wrestler:

Whether you were a Hogan fan or not, let's hope all of this can bring a much-needed change to our world when it comes to instilling more tolerance and kindness in everyone.

More like this
Amanda Seyfried Reflects On 'Mean Girls' & "Gross" Remarks That Men Made After It
By Jake Viswanath
Jake Daniels Just Became The UK’s First Active Football Player To Come Out As Gay Since 1990
By Sam Ramsden
The Music Industry Continues To Fail Black Women
By Precious Adesina
Celebrities & President Biden Are Enraged By The Leaked Roe v. Wade Decision
By Alyssa Lapid
Get Even More From Bustle — Sign Up For The Newsletter