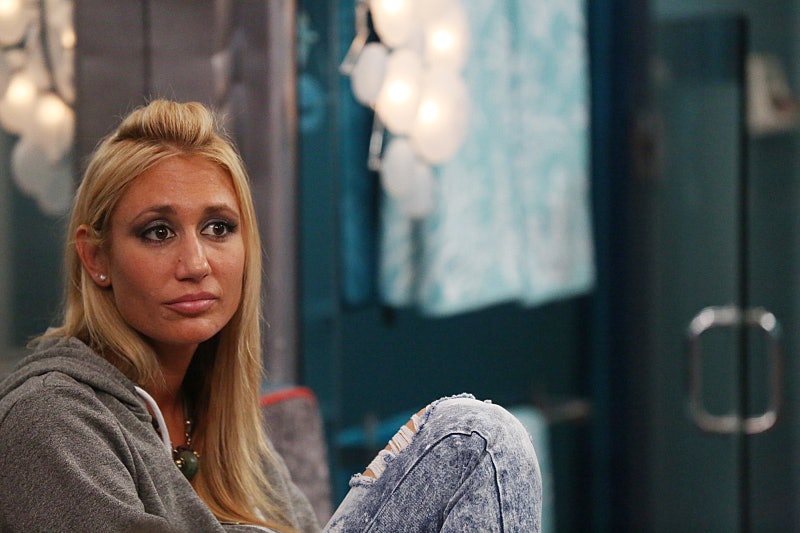 I completely wrote Vanessa off at the beginning of the season, but now the poker player has become one of my favorite houseguests. Vanessa has become someone that the other players need to watch out for. She has a grasp on this game that I don't think other houseguests have — they might think they have a grasp on it, but they don't — and if she continues to play the way she's playing, she could end up in the final two seat. With all puns intended, Vanessa could win Big Brother 17 if she plays her cards right, and not only am I completely rooting for her at this point, but so are all of the other hosts of Bustle's BB17 podcast, The Diary Room .

This far into the Big Brother season, there isn't one houseguest that is standing out to take the entire game. Unlike last season, when Derrick controlled the game from Day 1 and went unsuspected until the very end, BB17 doesn't seem to have one houseguest that screams winner as of Week 5. But I think if we give Vanessa a few more weeks, she can quickly become the front runner of the season. Check out what the Diary Room hosts had to say about her.

Vanessa has all of the qualities of a winner, and here's why she will win Big Brother 17.

Vanessa has won two HOHs and a Veto. She's proving herself to be someone who people need to fear in competitions, but the other houseguests don't seem to notice. Point one for Vanessa.

I don't completely agree with Vanessa's strategy to spark a fight with Jeff just to have a reason to evict him, but it worked. To get the least amount of blood on her hands, Vanessa decided she would need to instigate an argument that would give her an excuse to nominate Jeff. I can think of about 100 reasons to nominate Jeff.

How Vanessa has remained safe so far is beyond me. The houseguests playing this season seem to think people like Jeff (who didn't win one competition), or Audrey (who barely spoke to anyone during the week of her eviction) are bigger threats than those actually playing the game (Vanessa).

She Can Read People

I don't know if it is her poker player career or just being good at this game, but Vanessa isn't easily fooled.

She Will Turn On Her Alliance

At one point I thought Vanessa and Austin would remain loyal to the end, but Austin royally screwed up by telling Jason about the twins. And now Vanessa knows he's got to go.

She Doesn't Shy Away From Making Moves

At the end of the day, Vanessa knows one person can win this game. If she's next to Clay and Shelli, she doesn't stand a chance. Breaking up the King and Queen is a huge move, but it needs to happen in order to win. And who else would be able to make such a big move other than Vanessa?

Be sure to check out future episodes of The Diary Room on Bustle’s SoundCloud page and iTunes. Special thanks to producer Noel Howard for putting this together.