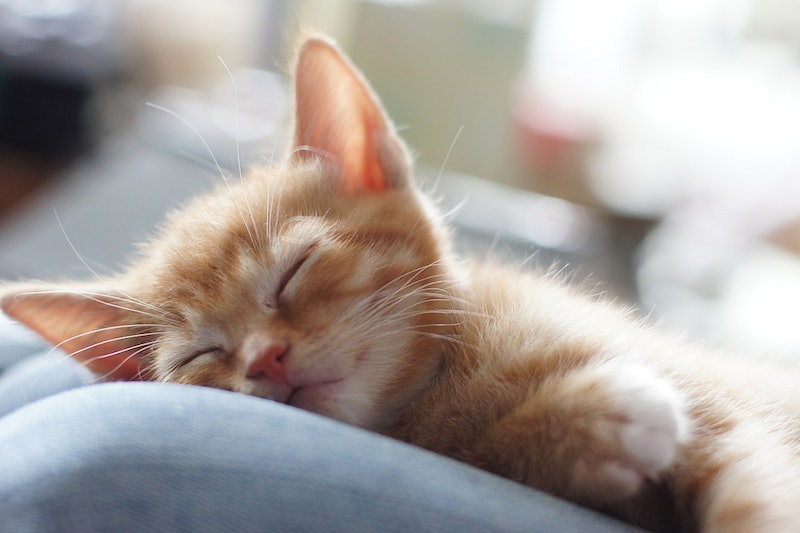 In today's episode of "things your mother was right about all along," it turns out that "sleeping on it" actually does help us solve problems. This is excellent news, because it means that whenever you're dealing with what feels like an insurmountable obstacle or find yourself stuck in the middle of the world's most difficult logic game (whatever, I'm studying for the LSAT), you can just go to sleep instead and know it will all be better in the morning. It's like scientifically-endorsed compartmentalizing.

The study comes courtesy of researchers in the psychology department at the University of Lancaster, who initially split participants into two groups, "wake" and "sleep." The volunteers were then given problem sets and asked to find the association between three words (for example: "cake," "Swiss," and "cottage." The answer is obviously "cheese" and I didn't even have to sleep on it — law school, here I come). Half the problems were deemed "easy" and the other half "hard." The difference between the groups is that the "wake" group saw the questions in the morning and then reattempted them in the evening (with no sleep in between), while the "sleep" group saw them first in the evening and then again the next morning (after they had slept).

The "sleep" group improved much more substantially in their second attempt than did the "wake" group. It seems sleep really does allow us to recharge our brains, making "sleeping on it" a scientifically sound way of making decisions.

But that's not the only reason sleep is the actual most important thing ever. Here are five other things sleep does for you that makes it incredibly worthwhile:

I bet your mom didn't tell you this one. According to a study conducted by the Sleep Foundation, 26 percent of people cite being too tired as the main reason they don't have sex. By extension, then, being better rested likely leads to having more sex. So basically, the more sleep you get, the better your sex life will be. I'd call that a win.

2. Getting a Good Night's Rest Lowers Your Risk of Injury

People who don't get enough sleep are the ones most frequently getting into car crashes and doing other sorts of dangerous things that increase their risk of injury due to distraction. Getting enough sleep is like walking around with a safety net.

3. It Helps You Form Memories

Sleeping is how your brain solidifies memories you've made during the day, so if you want to have stuff to reflect on when you're old and decrepit, better get enough sleep now.

4. It Cleans Out Your Brain

If you didn't know that your brain can get cobwebby, now you do. Molecules that cause neurodegeneration (the same ones that are linked to Parkinson's disease and Alzheimers) get swept away while you sleep, but if you don't get enough shut-eye, your brain won't have the oxygen it needs to do its housekeeping.

Seriously, though. A Stanford study of college football players revealed that athletes who slept 10 hours a night consistently had improved sprint times and better winning records than those who slept less.

More like this
6 Abortion Advocates To Follow On TikTok
By Sara Youngblood Gregory
The UK Abortion Laws In 2022, Explained
By Sophie McEvoy
How To Protect Your Digital Privacy If You Need An Abortion Post-Roe
By Kaitlyn Wylde
A Beginner's Guide To Practicing Meditation
By Carolyn Steber
Get Even More From Bustle — Sign Up For The Newsletter