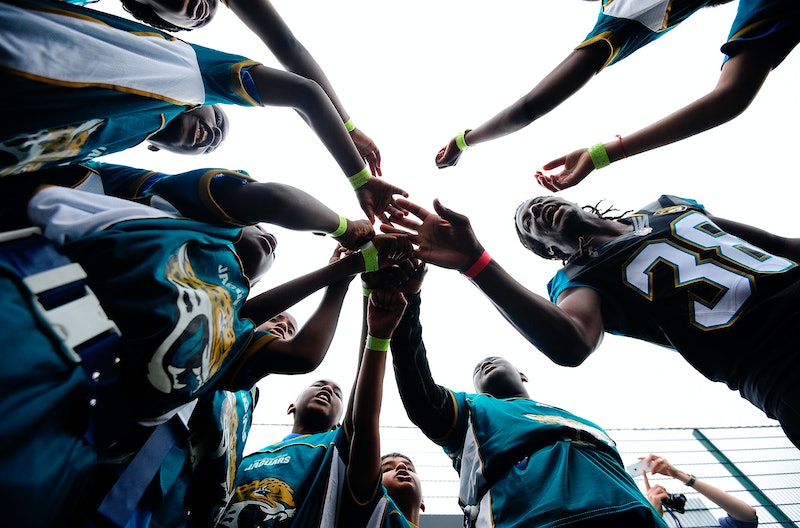 Emoji are everywhere nowadays — there's even talk of an emoji movie — and it turns out not even the (very serious) world of professional sports is not exempt. Two NFL teams have now unveiled their own emoji, and chances are it's just the beginning. So congrats, sport fans! And especially congrats to fans of the Baltimore Ravens or the Jacksonville Jaguars. You all can now properly express all your sports-related emotions.

The Jaguars unveiled their new emoji on Wednesday, but they could only claim to be the only team with their own emoji for about twenty-four hours; on Thursday, the Baltimore Ravens revealed their own. Most likely both teams have been developing the idea for a while, and for all we know there might already be other teams designing sets as we speak. After all, the idea makes a lot of sense, especially given how popular it's become to live tweet sporting events, and for fans to take their love of a team into the digital realm. So whether tweeting, texting, or posting on other social media sites, fans can now have a little fun.

The Ravens and the Jaguars took slightly different approaches in creating their emoji sets. The Ravens provided more detailed emojis representing specific players, while the Ravens seemed more inclined to create a lot of emoji faces in Ravens purple to help fans talk about their Raven-specific emotions. Both include plenty of images of fan paraphernalia like jerseys or foam fingers.

And of course, the teams wasted no time in taking their competitive nature off the field and onto Twitter for a little emoji-themed trash talk.

While they dispute whose emoji are better, it seems fans of both teams are enjoying the new keyboards.

So, assuming you aren't already in Jacksonville or Baltimore, when will your favorite teams be unveiling their own emoji? When will other sports be getting them? Most importantly, when will there be emoji of the U.S. National Women's Soccer Team to commemorate their World Cup victory?

These are all important questions. For now though, I guess we'll just have to be patient and wait for answers.