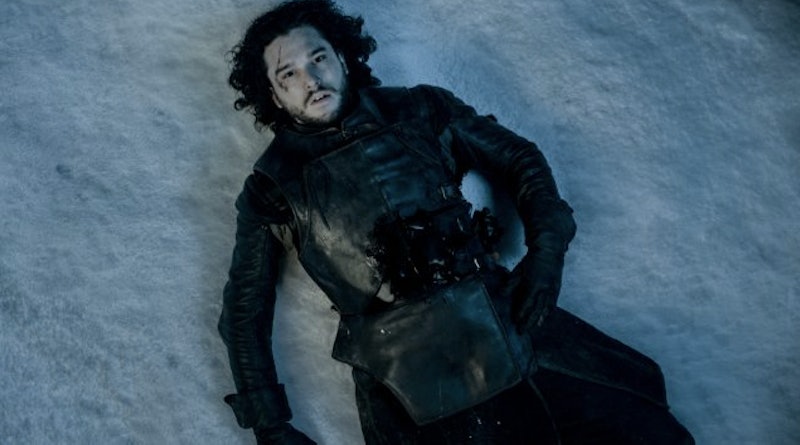 Alright, you guys, enough moping. We've all been sitting around mourning the loss of Jon Snow for long enough, it's time for us to move on with our lives and find some TV shows that are like Game of Thrones that will make us all miss it less. Enough speculation about who will be on next season, or counting down to the premiere date of Season 6; we can't all just put our lives on hold for this one show, we have to put ourselves back out there! (Hmmm... is this starting to sound weirdly like a relationship analogy to anyone else?)

OK, whatever, it's weird, but I'm embracing it. Instead of waiting by the phone for Game of Thrones to call, we have to get back into the TV show dating pool, get some numbers, start getting that magical mojo back. Sure, no one's ever going to fill exactly the void that Game of Thrones left behind, but you can find a show with similar qualities, and cobble together something that will at least numb the pain. Sort of like a Game of Thrones body pillow, if you will.

So if you think you're open to reactivating your TV show Tinder profile, here are eight Game of Thrones-esque shows that you should definitely be swiping right.

Based on the book of the same name by Hillary Mantel, which fills in and slightly fictionalizes real events surrounding the reign of Henry VIII, this BBC Two miniseries has all the brooding, scheming characters of GoT, with the added bonus that they're actually real. But that doesn't mean their plots are any less ambitious or conniving — I'm pretty sure Cersei Lannister and Anne Boleyn would be bosom buddies if their paths ever crossed.

It may not be a historical drama, but oh my God, is this jewel in the CBS crown dramatic. (I also happen to think it's the best show on television right now, though, so I'm admittedly biased.) Like Game of Thrones, you'll find yourself waiting on the edge of your seat for it every week, never letting yourself fall behind, and in recent seasons (there are six total, with a seventh on the way), they've shown an almost George R. R. Martin-esque ruthlessness about getting rid of beloved characters.

Like Game of Thrones (and Wolf Hall, come to think of it!), this Starz show is based on a book series, and in this case is the prequel to Treasure Island by Robert Louis Stevenson. It's set in the 18th Century, during the Golden Age of Piracy, so the potential for violence is high, perfect for fans of "The Red Wedding." It even shares a director with GoT, Neil Marshall, who was responsible for episodes like "Blackwater" and "The Watchers on the Wall."

Another historical show, this one airs on The CW and centers around Mary, Queen of Scots, during her early years in France. They go pretty much full soap opera with it, so the characters are larger than life, while still based in reality (as in, these people actually existed). But if there's one thing they like, it's getting frisky with each other, so count on a bunch of sex scenes, just minus the full-frontal you may have grown accustomed to with HBO. Plus, it just got renewed for a third season earlier this year, so, unlike GoT characters, you don't have to worry about it being ripped away from you without warning. Sigh.

This fictionalized show on the History Channel is based on the activities of the Vikings (duh) in medieval Scandinavia, around the 12th and 13th centuries. It mostly follows Ragnar Lodbrok, a legendary Norse figure who led his men on raids through England, before ultimately becoming their king. So, for anyone who's keeping track, we've got an ancient setting, kings, and fearsome warriors. The GoT parallels are endless.

Hear me out! There are shifting alliances, broken promises, and twists that we never saw coming. And I do mean never saw coming, because since this CBS show is happening as close to real time as is feasible (some of the episodes are even live!), there's no such thing as spoilers from people who read the book.

You like seeing people crawl all over each other trying to get to the Iron Throne? Well then, let's just swap out the throne for the White House and we've got the Netflix hit House of Cards, in which Frank Underwood doesn't let the fact that it's set in the modern day make him any less bloodthirsty or ruthless. Oh, and if we're talking about strong, complicated female characters, you can't get much better than Claire Underwood. It's been three seasons, but I'm not sure we'll ever get a read on her.

Admittedly far less grisly and serious than Game of Thrones, this is an option to consider if you love plot twists but have a weak stomach. (Or any stomach at all, because yikes, GoT.) The main connection that this ABC series has to its gorier counterpart is that it's extremely character-driven, with personalities from all different fairytales coming together in one location to interact, much like the interweaving stories of Westeros.

Now, go forth, marathon these shows, and live as your best self — at least, until GoT Season 6 premieres.